What did you think an artist would pick up on from your poem?
Poet Kim Garcia: Looking at Helen’s work I knew the broadside would be beautiful and intelligent. What surprised me is that I thought there might be more obvious fear in the image, but Helen is a much more subtle thinker and I love the way the fear in her image creeps up on me.

What inspires you in this poem?
Artist Helen Beckman Kaplan: I was immediately drawn in by the voice in the first line, which seems almost demure, like a pathologically shy person preferring to observe life from a safe place of invisibility. Things quickly become more ominous, and the voice feels both hubristic and naive, and then chillingly poetic. It makes me think of a teenager’s outlook, often very sophisticated and romantic but so prone to undeveloped rationalizations.

Did the visual artist refract any element of the poem that made you see the poem differently?
Poet Kim Garcia: Yes, the way her drone dominates the landscape—it’s vast, like Moby Dick or the Hindenburg. The sense of disaster is still in its triumphalist guise. I think that’s fantastic because one of the dangerous things about drones is this huge technological fantasy that we as a public or as a country entertain about this very slight piece of equipment, fooling ourselves that its precision means we’re waging a no-cost war. The invisibility of this program and the lack of policy surrounding it for years are unmasked by Helen’s image.

When you began this piece, was it color, shape, or some other aspect that you followed? Did that change?
Artist Helen Beckman Kaplan: I went through many photographs of drones, looking for a point of view that felt like the essence of something powerful streaming along. It was important to clearly frame the windowless/eyeless swollen hump, and this three-quarter view from above had a combination of taxonomical information and classic grace. I experimented with other formats of abstracted silhouettes, but this airy horizon sliced by an avian predator seemed western and direct. I used pencil in keeping with wanting it to feel like it could be the work of a precocious kid engaged by the form and power.

What surprised you about this collaborative piece?
Poet Kim Garcia: The combination of the actual drone with the Las Vegas landscape. That’s where the Air Force is piloting from, but the drones themselves are overseas (as far as we know).
That’s one of the complicating factors about drones: legally they can be anywhere terrorists are, and they can be deployed against US citizens.
So for Helen to put the image of the drone, including that almost miniature missile already dropping, over our own country brings our relationship and responsibilities around this weapon visually home.
Artist Helen Beckman Kaplan: It’s always a little bit startling and exciting to see the 2D wall of words contrasting the illusion of space. It reminds me that an image is also really 2D. The presence of the words sometimes seems like a conjured message.

Have you ever written work that has been inspired by visual art?
Poet Kim Garcia: Yes, I’ve done that frequently, most recently in “the mystic crucifixion by Tintoretto” which was a response not only to the work itself, which is a Nativity on the surface as seen by a viewer, but also to the x-rays by the Boston MFA that showed the Crucifixion that had been recombined to create the Nativity. I was fascinated by that transformation from greatest grief to greatest happiness.

What was that experience like for you?
Poet Kim Garcia: Completely natural—I can’t imagine writing a single poem without the inspiration that comes from all the arts that surround us—painting, sculpture, music, photography.

Why were you inspired to do so?
Poet Kim Garcia: I was fascinated by the idea of taking great sorrow and creating new joy.

How does literature fit into your creative life as a visual artist?
Artist Helen Beckman Kaplan: For the past few years I’ve been creeping through the first two volumes of Remembrance of Things Past while I’m at the studio—the voluble specificity of that world serves well to enhance my negotiation of painting and drawing.

If the Broadsided collaboration were a piece of music, what would it be?
Poet Kim Garcia: Arvo Pärt, maybe?
Artist Helen Beckman Kaplan: Some kind of traditional throat singing.

Seen any good art lately?
Poet Kim Garcia: I was just back at the Isabella Stewart Gardner Museum (in Boston) and I’m always fascinated by the layering of the courtyard, with those rooms curated along a certain set of Gilded Age notions about what a life surrounded by art would be, and then the art itself, which is talking about human life in ways that are so often different. I suppose I’m thinking about the Rembrandt right now.
Artist Helen Beckman Kaplan: “The Flaying of Marsyas” by Titian was in town lately. A bit grim, but a favorite.

The idea of broadsides comes out of a political context—how do you think that your collaboration speaks to this history?
Poet Kim Garcia: The idea of political art is tricky. Politics longs for effective power in a very linear way on certain issues, with measurable outcomes. The power art seeks can’t be easily measured, with complex effects and a complicated mix of urgency and patience. Poetry can be seen as the last responder at any catastrophe but what we hope is that that response will last, and continue its work of warning, grieving and transformation. 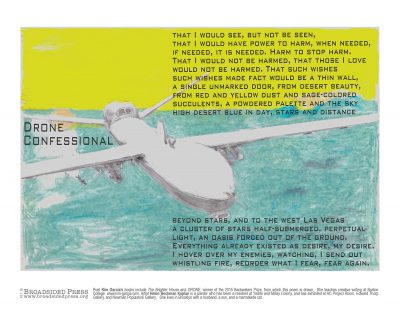 Poet Kim Garcia is the author of The Brighter House, winner of the 2015 White Pine Press Poetry Prize; DRONE, winner of the 2015 Backwaters Prize; and Madonna Magdalene, released by Turning Point Books in 2006. Her chapbook Tales of the Sisters won the 2015 Sow’s Ear Poetry Review Chapbook Contest. Her poems have appeared in such journals as Crab Orchard Review, Crazyhorse, Mississippi Review, Nimrod, and Subtropics, and her work has been featured on The Writer’s Almanac. Recipient of the 2014 Lynda Hull Memorial Prize, an AWP Intro Writing Award, a Hambidge Fellowship, and an Oregon Individual Artist Grant, Garcia teaches creative writing at Boston College.

Artist Helen Beckman Kaplan is a painter who was educated at Rhode Island School of Design, Tyler School of Art, Indiana University, and Skowhegan School of Painting and Sculpture. She has been a resident at Yaddo and Millay Colony, and has exhibited at AC Project Room, Edward Thorp Gallery, and Newman Popiashvili Gallery. She lives in Brooklyn with a husband, a son, and a marmalade cat.