Tagged: Ecopoetry, On the Bus 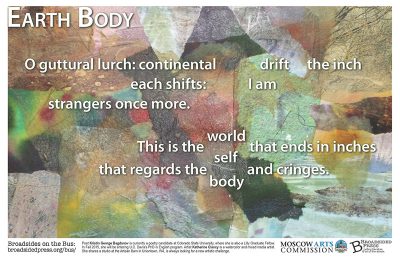 Poet Kristin George Bagdanov is currently a poetry candidate at Colorado State University, where she is also a Lilly Graduate Fellow. In Fall 2015, she will be entering U.C. Davis’s PhD in English program.

Katherine Clancy is a watercolor and mixed media artist. She shares a studio at the Artisan Barn in Uniontown, WA, is always looking for a new artistic challenge.