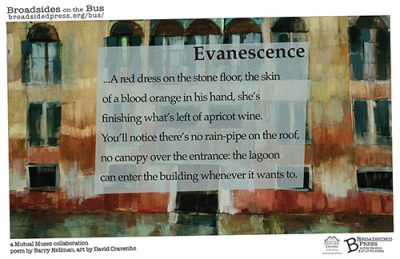 David M. Cravenho is an artist currently working on Cape Cod whose work appears in permanent collections around the world. He has taught at the University of Georgia in Cortona, Italy and at Massachusetts College of Art where he received a Masters of Science in Art Education. He received a Masters of Fine Arts from Rochester Institute of Technology’s School of American Craftsmen. He has had Artist-in-Residencies at the Archie Bray Foundation, Banff Centre School of Fine Arts, and Watershed Center for Ceramic Arts, among many others.

Poet Barry Hellman is a clinical psychologist who organizes and hosts poetry and music events, publishes the Cape Cod Poetry Group on Facebook, and leads poetry workshops. His poems have appeared in literary journals, anthologies, broadsides, and a chapbook, The King Of Newark from Finishing Line Press. “Evanescence” is forthcoming in the Cape Cod Poetry Review, Winter/Spring, 2014.