What did you think an artist would pick up on from your poem?
Poet Keith Ekiss: I hoped the artist might pick up on a sense of absence and loss. Something’s missing in this landscape, which for many years has been the home of the Pima, that would still be there, if it weren’t for the damming and diverting of the Gila River in Arizona.

What inspires you in this poem?
Artist Douglas Culhane: The sense of loss and injustice.

Did the visual artist refract any element of the poem that made you see the poem differently?
Poet Keith Ekiss: There’s a sinuousnes to the art, like a flower or a vine, that I admire. The poem itself feels to me very ordered and restrained. The artwork brings out the natural flow underneath the scene that I describe.

What surprised you about this piece, once you saw the artwork and poem together?
Artist Douglas Culhane: The contrast (visually) of image and text. I decided to focus on expressing what was lost (specific bird, specific natural landscape). I had decided to leave out the hard geometric lines which the poem describes—but there they are visually in the poem—the underlying grid of printed text.

What surprised you about this collaborative piece?
Poet Keith Ekiss: The color! As a poet, I work in black-and-white, and I find that the blue of the river in Douglas’s art is mesmerizing. It gives me a more tangible sense of what’s missing in this landscape.

When you began this piece, was it color, shape, or some other aspect that you followed? Did that change?
Artist Douglas Culhane: I began with line drawings of birds, then settled on one. A heron is something I like to draw— I can make that outline freehand from memory fairly easily. The map was based on a specific place, but that I changed it to work with the bird form.

Have you ever written work that has been inspired by visual art? What was that experience like for you? Why were you inspired to do so?
Poet Keith Ekiss: I often write about photography, and have written poems about work by Richard Avedon, Harry Callahan, and Henry Wessel, among others. My father is a photographer, so photography is a presence that’s been familiar since I was a child.

If you had to represent the Broadsided of “Extirpation” with one word, what would it be?
Poet Keith Ekiss: Ghostly
Artist Douglas Culhane: Extirpation

Read any good books lately?
Poet Keith Ekiss: Many! I’ve been reading and writing prose poems, and William Matthews’s translations of Jean Follain,  A World Rich in Anniversaries, has been particularly inspiring.
Artist Douglas Culhane: Nox by Anne Carson, The Island at the Center of the World by Russell Shorto.

Seen any good art lately?
Poet Keith Ekiss: SFMoMA’s restaging of the 1975 “New Topographics” exhibit is great. These photographers were showing, in a dispassionate and accurate way that I find appealing, the way we live in the landscape today.
Artist Douglas Culhane: Chris Astley’s sculpture installation “Geronimo” at Bravin Lee Programs (NYC), Lee Bontecou at MoMA.

Anything else?
Artist Douglas Culhane: This was an especially interesting collaboration for me. The theme and imagery of Keith’s poem drew me in, as I lived with it I realized that it was also built on words with social and political weight: “reservation,” “history,” “territory,” “extirpated.” I feel like my role in the collaboration was to amplify the imagery—what was alluded to, but absent.

Given the events in the Gulf this summer, this project speaks to deep and urgent concerns for all of us. 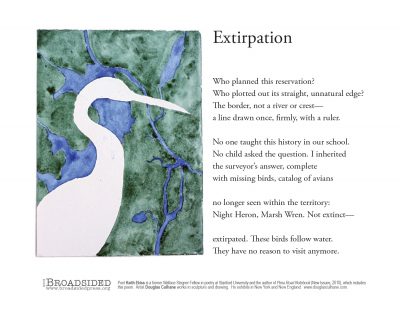 Poet Keith Ekiss is a former Wallace Stegner Fellow and Jones Lecturer in Poetry at Stanford University and the past recipient of scholarships and residencies from the Bread Loaf and Squaw Valley Writers’ Conferences, Santa Fe Art Institute, Millay Colony for the Arts, and the Petrified Forest National Park. He is the author of Pima Road Notebook (New Issues Poetry & Prose, 2010), which includes this poem.