What is behind your choice of this piece of art in response to the Syrian Refugee Crisis?
Artist Karen Cappotto: The idea of a floating “landscape” is hopeful, heroic and in the face of horrific conditions, a refuge.

Why did this piece of art resonate for you or seem like it would give you an avenue into writing about the Syrian Refugee Crisis?
Poet Lena Khalaf Tuffaha: My daughters volunteer for a local organization in Seattle called the Salaam Cultural Museum. Salaam has been collecting donations of clothes, blankets, medical supplies, toys, hygiene kits and all sorts of necessities for Syrian refugees since the beginning of this conflict. Their work was primarily focused on Syrian refugees in Jordan, where they take medical missions many times a year to deliver the supplies and work with local volunteers to support refugees at this most vulnerable time in their lives. Recently their work has expanded to Lebanon and now to Greece.

My friends at Salaam have been sharing their photographs of working in Greece, at the water’s edge, receiving refugees. This work of art spoke to me because it captures so much more than the outlines of a Greek seaside village. I love the tenderness of the viewpoint, the soft colors, the hazy view that might be similar to what is first visible from the water, or through tears. Even though it is a port, and a longed-for destination, it’s also just one stop in a long journey, just one fragment of a long story, still unfolding. I thought about how much has to be lost, compressed, left behind to drive someone toward this coastline on this harrowing journey.

What do you think is the role of art in regards to real-world, real-time events? In other words, what makes a “successful” occasional or political piece of writing or art?
Artist Karen Cappotto: I have heard the most political act is an apolitical one. So in those terms, maybe it is possible to affect the future.
Poet Lena Khalaf Tuffaha: Palestinian poet Mahmoud Darwish says: “every beautiful poem is an act of resistance.” I am powerless before the immensity of human suffering, except for my words. Art and poetry can be a testimony of human experience. In a culture that is governed by sound bites and news flashes, art and poetry require us to look closely, to listen. My hope is that this poem invites people to see the human being beneath the label “refugee”. 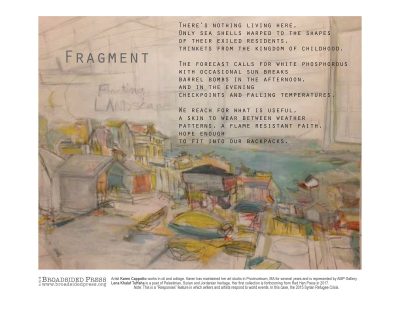 Artist Karen Cappotto recently won the Lillian Orlowsky and William Freed grant for painting and is featured in a new book by Deborah Forman: Contemporary Cape Cod Artists: Images of Land and Sea. Cappotto works in oil and collage and is represented by AMP Gallery in Provincetown, MA.

Poet Lena Khalaf Tuffaha is an American of Palestinian, Syrian and Jordanian heritage who writes poetry, essays and literary translations. She is a Hedgebrook alum and an MFA candidate at the Rainier Writing Workshop. Her poems have been translated into Arabic, Greek, Hebrew, Italian and Spanish and have been read at anti-war events in Gaza, London, Tokyo, Toronto and across the United States. Her first collection of poems, Water & Salt, is forthcoming from Red Hen Press in 2017.