What did you think an artist would pick up on from your poem?
Poet Karen Llagas: I thought the artist would initially pick up on the external landscape of the poem (ocean, lighthouse, fog). I was happy that Helen also picked up on the poem’s gesture—this voice speaking from across a big distance and giving a strange & intimate ‘advice’ or perhaps simply talking to him or herself. I wrote this poem out of disappointment that modern technology has made lighthouse keepers completely unnecessary, and this poem may have romanticized them somewhat—I think that she may also have picked up on this, and on the speaker’s longing and sense of obsolescence.

What inspires you in this poem?
Artist Helen Beckman Kaplan: I love the mood, which is both suggestive and dreamy but within a framework of practicality.

Did the visual artist refract any element of the poem that made you see the poem differently?
Poet Karen Llagas: That the title is tilted up surprised me—that gives the poem visual lift, and playfulness, I think. It also brings to mind a literal beam from a lighthouse—from this I can picture the poem’s lines as separate beams, though all pointing in the same direction. As I’ve only seen the poem’s text in black font and all alone on the page, seeing it stark white against this dark, abstract, labyrinth-like background whose lines create a counter movement to the poem was unsettling—a very nice feeling to get from a poem I thought I knew so well.

What surprised you about this collaborative piece?
Poet Karen Llagas: It surprised me that I had a totally different visual rendition in mind (composed embarrassingly of an ocean, a lighthouse and a foggy night). It was as if I was expecting Helen to explain to me what the poem is about and I’m really glad she didn’t. It was a surprise how the text and image worked separately, and responded to each other.
Artist Helen Beckman Kaplan: I had an idea right away and spent some some time thinking about how to go about it, but once the beginning of that thought was laid down I, as often is the case, found the image continuing to generate on its own terms and being fairly far from my initial idea.

When you begin a piece of visual work (or, if that’s too broad, when you began this piece), is it color, shape, or some other aspect that you follow?
Artist Helen Beckman Kaplan: For Broadsided, I definitely keep in mind that I am creating an image to complement words. I read this poem as a kind of job description gone awry, and so I used the idea of a newspaper ad as the structure for the image. Within that, night time and water took over, but I did not want to represent any of this too literally. When Liz layed out the poem with the title flying up on the right, I wanted to expand the red tangle to try to capture the title and hold it in.

Have you ever written work that has been inspired by visual art? What was that experience like for you? Why were you inspired to do so?
Poet Karen Llagas: Yes, a few times. The experience is always liberating and stimulating. As someone who leans towards dramatic monologues rather than ekphrastic poems, it’s always a challenge for me to respond to visual art ‘purely’ on its terms, through objective description. So I try to do so from time to time. And of course, at the other end of the spectrum, to imagine a person/ thing / shape/ color speaking from a photograph or a painting, and inventing a narrative and a world of possibilities around that is pure fun.

If you had to represent the Broadsided of “From a Lighthouse Keeper” with one word, what would it be?
Poet Karen Llagas: Eclipse
Artist Helen Beckman Kaplan: Illuminate 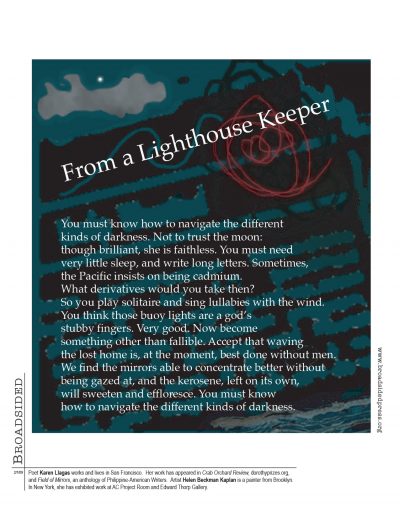 Poet Karen Llagas was raised in the Philippines and currently lives in San Francisco where she works as a teacher and an interpreter. She has an MFA from Warren Wilson College and her work has appeared/forthcoming in Crab Orchard Review and Field of Mirrors, an anthology of Philippine-American Writers. In 2007, some of her poems received one of the $2500 prizes in the Dorothy Sargent Rosenberg Memorial Fund competition.

Artist Helen Beckman Kaplan is a painter from Brooklyn who was educated at Rhode Island School of Design, Tyler School of Art, Indiana University and Skowhegan School of Painting and Sculpture. She has been a resident at Yaddo and Millay Colony, and has exhibited her work in New York at AC Project Room and Edward Thorp Gallery.