What is it like to see both visual responses to the poem?
Translator Roger Sedarat: The texture of the original source text slowed me down and actually got me looking at the Persian a little differently. The real difference, however, proved the flaming art behind the translation. I sort of credit my own imagination around the fire Hafez reiterates as getting the job done. However, seeing the poem itself house fire does make it a lot more tangible. That’s really significant for the sufi mystics. One might think the verse touching the divine somehow remains ethereal, but for the masters there is something very tangible and experiential about the world. Consider how Rumi’s great teacher took the poet’s books and placed them in the literal fire to show them how they didn’t burn. I very much appreciate and benefit from the visual fire, especially as it endures and repeats through each couplet (following the form of the ghazal).
Artist Maura Cunningham: I really enjoy seeing both responses to the poem. Language has such a profound impact on our perception. In the Persian form of the poem, as a non-Persian speaker/reader I am able to see the language of the poem as pure visual imagery; as line, shape, texture, gesture, and ultimately as a layer of expression with implied meaning. Whereas, in the English version of the poem, I am able to experience the poem with a more cognitive understanding of its meaning, and I’m also able to appreciate how both the poem and the image serve as a mirror of the visceral elements of the experience of one another.

Do you see an overlap between the act of translation and the act of responding visually to a piece of literature?
Translator Roger Sedarat: So often when those unfamiliar with the practice of translation speak about a text rendered into another language, they tend to zero in on fidelity to the original. That’s a natural and completely valid response. Literary translators know, however, getting close to meaning is the barest beginning of re-creating the spirit of the text. All too often the worst trouble I’ve had teaching translation to students is not accuracy but a trepidation toward breaking free from a kind of equivalency. To this end we use interdisciplinary approaches in the creative writing translation classroom. Playful exercises that involve a visual response often spark new and inventive moves on the page.
Artist Maura Cunningham: I do see an overlap however, it seems to me there is a lot more room for exploration and discovery when translating a piece of literature into visual form than there is going from one language form to another language form. “Meaning” is so subjective but often we are very wedded to our words being understood as intended. The sound and feeling and understanding of each word, and how each word flows into all the other words—is such a delicate and precise balance. Whereas, going from the written meaning of a poem to the visual response, feels like more of an offering of a layer of understanding vs “here is what the author is saying only in your language vs theirs.” While I love responding visually to the written word, I do not envy the writer who has to translate the words of another…. so much pressure! But than, maybe that is why im a painter and not a poet/translator.

What did you imagine an artist would respond to in this poem?
Translator Roger Sedarat: I was thinking more varied details, as the couplets cohere around the repeated phrase yet change throughout the poem. Providing a background of fire surprised me in a great way. The artist claimed the unified sense of the disparate couplets as a kind of meta-statement. In a way it seems obvious, but I so wouldn’t have thought of that approach.

For the source text (the original Persian poem), I had less expectations. Actually, and this is naive on my part, I figured that since we’re focusing on translation into English, the source text would remain the same. The artist’s interpretation got me thinking how in translation the source text actually does change, in a sense. I mean, we can’t help but look at it differently as we intend to bring it into another language. There’s so much truth in that Borges’ story about translating Don Quixote, “Pierre Menard,” wherein even to re-copy the same text changes things. The amorphous, metallic texture introduced as background to the Persian text got me thinking a lot more of this.

Why Hafez? How does translation fit into your creative life?
Translator Roger Sedarat: As an Iranian-American poet, I started writing and studying formal poetry (in English as well as Persian). I myself write ghazals and create postmodern inventions out of the received form from the Persian tradition. To go to Hafez is go back to the grand master of what the great poetry of Iran has been founded upon: wordplay, song, paradox, spirituality combined with licentiousness. Hafez belongs to the Persian language and culture so strongly that his verse is recited from memory by the illiterate, and his great collection (divan) is opened at random to tell one’s fortune. To think comparatively, I suppose it’s like wanting in the American tradition to return to the fundamental source, like Emerson.

Why this poem?
Artist Maura Cunningham: My painting is called, “The evening wraps me, steady as a flame” and was inspired by the feeling of being held, in all the mystery of the unknown, in light, in “the fire of the beloved”—of all that is lovely and beyond words (for me). When I read this poem I felt it was articulating a sensory experience I have had but had not understood in language form.

One last question…. Hafez or Hafiz? How did you make this decision?
Translator Roger Sedarat: The outside reader (a Persian specialist) that my press used for my first book convinced me that the English spelling with “ez” better approximated the pronunciation. For some reason, I have noticed westerners wanting to turn the “i” into the long “ee” sound, as if from Spanish or French. I’m hardly a stickler about such things, and I’m sure debates go on about them. 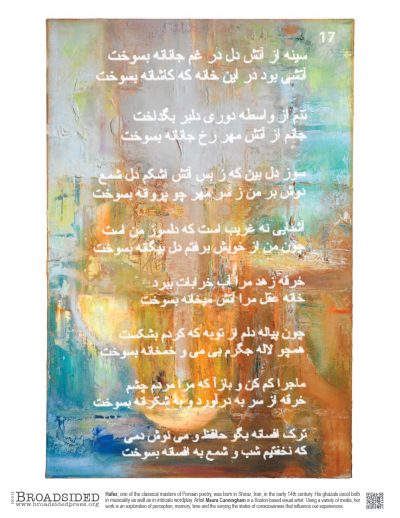 Poet Hafez, one of the classical masters of Persian poetry, was born in Shiraz, Iran, in the early 14th century. His ghazals excel both in musicality as well as in intricate wordplay. Because of both its incredible style as well as its deft philosophical treatment of such themes as death, love, and divine worship, his verse has had a lasting and pervasive influence on Persian language and culture.

Translator Roger Sedarat is the author of two poetry collections, Dear Regime: Letters to the Islamic Republic(Ohio UP, 2007) and Ghazal Games (Ohio UP, 2011). His translations of classical and modern Persian poetry have appeared in World Literature Today, Drunken Boat, and Arroyo. He teaches poetry and literary translation in the MFA Program at Queens College, City University of New York.

Artist Maura Cunningham (Persian version) is a Boston based visual artist. Using a variety of media, her work is an exploration of perception, memory, time and the varying the states of consciousness that influence our experiences. www.mauracunningham.com.