What made you think of Broadsided for this poem?
Poet Marci Calabretta Cancio-Bello: First, I’m a huge fan of Broadsided’s mission and always enjoy seeing the new broadside every month. Art and poetry complement each other wonderfully and I love the way Broadsided offers expansive space for small poems to thrive in the real and digital world alongside so many different artistic styles.

What inspires you in this poem? What drew you to it?
Artist Elizabeth Terhune: Inspiration: first, the mantis.  Drawn up short, abruptly, thought’s space interrupted, invaded, to fixed attention, hearing: mantis.  Synonym: mystery. “Ghost Mantis” doubles that.  Second, description, “made of after-autumn”.  Seemed a color but it isn’t really describing color.  Curious.  Time and color, pulled together.  Third: “crackling & bent as constant prayer.” Sound (ominous) enters the quiet space of the poem and things get way complicated.  Unfortunately, I cannot tease apart my associations here, but the poem moves into large territories.

What did you think an artist would pick up on from your poem?
Poet Marci Calabretta Cancio-Bello: I hoped that the artist would look up the Ghost Mantis and be as enamored of the creature as I am (I hope everyone reading this will pause and do the same). Elizabeth’s rendering is absolutely gorgeous.

When you began this piece, was it color, shape, or some other aspect that you followed? Did that change?
Artist Elizabeth Terhune: Leave it to poetry to prompt research! Initially, I assumed, wrongly, that the ghost mantis was an invention.  It made perfect sense, adding mystery to mystery.  One wouldn’t have the same assumption with “Ghost Fly,” for example.  Then poem prompted a revisit.  I sat with my Golden Library of Knowledge book from 1962, The Insect World.  Its cover features a larger-than-life praying mantis against a bizarrely super-saturated turquoise background.   The legs, the multiple thoraxes, all the parts required study.  This deluxe edition provides a diagrammed insect family tree rooted by a very basic, centipede-like “ancestral insect.”

But the ghost mantis, unlike my book’s illustration, is a small, equator-area, mantis. And it is, indeed, a creature that looks to be covered in flaking bark that trails its body, something like the ancient Chinese statue I saw of a robed dancer, sleeves, dress, head moving into space in multiple directions, yet anchored to the gravitational core.  It is also the size of an adult human thumbnail.  I wanted some hiddenness, age, archetype presence.  I opted for ink and a flattened form but with dendrite growth, like a petroglyph that connects to rock, preserving time and process, partaking of magic.

Did the visual artist refract any element of the poem that made you see the poem differently?
Poet Marci Calabretta Cancio-Bello: I’ve always thought of this poem as a bit scrappy, but when I saw the precisely smudged and veined edging of the mantis shape, I couldn’t help thinking of that last line as empowering and beautiful for both the mantis and the reader.

What surprised or struck you once you saw the finished broadside?
Poet Marci Calabretta Cancio-Bello: With such a small poem, every word is pressured to be meaningful, and I assumed the artist might take one word and unpack it, but somehow Elizabeth allowed every nuance to shine simultaneously as both earthy and ethereal in a way the language alone couldn’t do.
Artist Elizabeth Terhune: The mantis is larger than all of the words!

Have you ever written work that has been inspired by visual art? What was that experience like for you? Why were you inspired to do so?
Poet Marci Calabretta Cancio-Bello: Ekphrastic work is hard for me, mainly because I never feel like I can do justice to the visual art, so I love where the challenge takes me and what I learn from it, but none of it has been publishable.

How does literature fit into your creative life as a visual artist?
Artist Elizabeth Terhune: This is like asking, “how do you enjoy your involuntary muscles?”!

If this broadside were a piece of music, what would it be?
Poet Marci Calabretta Cancio-Bello: I was imagining Mozart’s Requiem Mass in D Minor, but it might actually be more like a Beethoven concerto.
Artist Elizabeth Terhune: Drumming. Some flute.  Something that might accompany a scene from a Kurosawa or Mizoguchi movie.  Flinty.  Certain bluejay calls.

Anything else? (Here, we invite the collaborators to invent a question, add a comment, or otherwise speak to what the questions so far have not tapped about their Broadsided experience).
Artist Elizabeth Terhune: Thank you to Marci Calabretta Cancio-Bello.  And to Liz and Broadsided team. 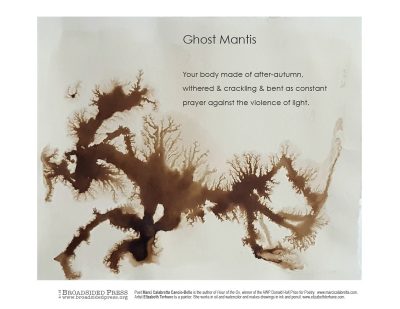 Poet Marci Calabretta Cancio-Bello is the author of Hour of the Ox (University of Pittsburgh, 2016), winner of the 2015 AWP Donald Hall Prize for Poetry and a 2016 Florida Book Award bronze medal. She has received poetry fellowships from Kundiman, the Knight Foundation, and the American Literary Translators Association. Her work has appeared in Best New Poets, Best Small Fictions, The New York Times, and more. www.marcicalabretta.com

Artist Elizabeth Terhune is a painter. She works in oil and watercolor and makes drawings in ink and pencil. elizabethterhune.com.