What did you think an artist would pick up on from your poem?
Poet Andy Stallings: I did have a sense that, whichever artist found themselves inclined toward this poem, they’d be drawn to the lemon. I would have been myself. Both in the poem and in the painting, I feel that the lemon has a tremendous kinetic potential, which is realized by the window breaking in the poem and by the squiggly geometric shapes in the painting. Differently, that is, but around the same locus of energy.

What inspires you in this poem?
Artist Elizabeth Terhune: Its simultaneous openness and illusiveness. The movement from a lemon and bees to a city and a window breaking. I also liked the way the poem addresses silence and then sound, and time, and aging, changing, and motion, falling, streaming, burst glass. It has a kind of wound-up quality. I am continually surprised by the ending.

Did the visual artist refract any element of the poem that made you see the poem differently?
Poet Andy Stallings: To be perhaps blatantly obvious, I see the poem much differently due to the vibrancy of the (even muted) yellow. It’s always been in black and white to my eyes, inner and outer—and even in imagining the possible shape of the artistic response, I’ve thought of the lemon as somehow colorless. That’s no longer possible, and I wonder how it ever was.

What surprised you about this piece, once you saw the artwork and poem together?
Artist Elizabeth Terhune: That the image and the poem were close in size! And that the physical pulses in the image correspond to the number of stanzas. The image is top-heavy, however, in a way the poem is not.

What surprised you about this collaborative piece?
Poet Andy Stallings: Can a lemon be upside-down? I see it upside-down in this painting, and that’s both surprising and wonderful to me. My sense of the entire scene is inverted by my perception of the lemon as inverted. In a poem invoking breakage—even restrained—this seems apropos. Which is to say that I hope I’m seeing the intent correctly.

When you began this piece, was it color, shape, or some other aspect that you followed? Did that change?
Artist Elizabeth Terhune: I was initially struck by the falling lemon and the streams of bees. Then, I liked that I could imagine/understand a hive “containing” winter, but knew making an image of that would be difficult—but it intrigued me. I opted for a lemon and some ambient hive cells suspended together. I was hoping to get at the space of the poem.

Have you ever written work that has been inspired by visual art? What was that experience like for you? Why were you inspired to do so?
Poet Andy Stallings: For whatever reason, this one has been a difficult question to answer. I have quite frequently been inspired by visual art. I would say moreso in the past than the present, but that’s a half-truth. What’s happened is that my relationship to visual art has altered. I began writing poetry largely in direct response to art—particularly outsider art, so-called, and some topically difficult material I encountered in a class on tragedy, but also standard museum viewing. I would call that work ekphrastic in a traditional sense, and I’m not drawn to that style now in my own or in most other poets’ work.

However, I still frequently respond to art in my poetry—I suppose the difference for me is that I’ve (recognizing it so just now) begun to view art as simply another form of stimulus or sensation, as a tree is, or my wife’s foot brushing against the small wicker trash can under the desk, rather than as a privileged entity. Particularly so far as the resilience of a subject is concerned. So it’s a much more fluid encounter or transaction than what I would consider to be a direct “inspiration” drawn from art.

If you had to represent the Broadsided of “Harvest City” with one word, what would it be?
Poet Andy Stallings: Bright
Artist Elizabeth Terhune: Echoing. Walking.

Read any good books lately?
Poet Andy Stallings: A lot of them. Five for the record: Laura Walker’s new book, bird book, Myung-Mi Kim’s Dura, Leslie Scalapino’s That They Were At the Beach, Zach Savich’s The Firestorm and Events Film Cannot Withstand, and David Antin’s What It Means to Be Avant-Garde.
Artist Elizabeth Terhune: The Death of the Heart by Elizabeth Bowen. The Death of the Adversary by Hans Keilson. The Pig Did It by Joseph Caldwell, plus the other two books in his Pig trilogy. I laughed my way through root canal surgery reading the Pig books.

Seen any good art lately?
Poet Andy Stallings: Honestly, it’s been awhile since I’ve seen much good art, at least outside of books. While traveling a week ago, though, I saw an exhibit in the San Francisco International Airport, set between two moving walkways in one of the concourses. It was “folk art” made of recycled materials, and some of the things in there were interesting to me. Some ducks and small bicycles especially.
Artist Elizabeth Terhune: Helen Beckman’s beautiful painting show at the Newman Popiashvili gallery. And if you are in NYC in July, come see my work at the StandPipe Gallery, 150 W.25th St. New York (in Chelsea).

Anything else?
Artist Elizabeth Terhune: This poem was more—what I might call—cerebral than other poems I’ve Broadsided. I enjoyed working by approaching images and nudging them. I’m grateful to the poet for that experience. And I would be remiss if I did not thank Liz Bradfield and the Broadsided crew. What a wonderful thing this Broadsided business is! 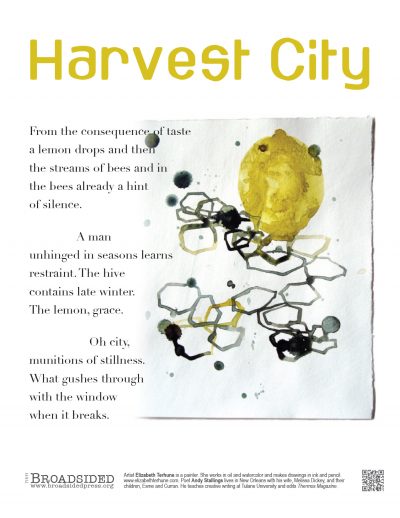 Poet Andy Stallings lives in New Orleans with his wife, Melissa Dickey, and their children, Esme and Curran. He teaches creative writing at Tulane University, and edits Thermos Magazine. Poems have recently appeared or are forthcoming at Clementine Magazine, I Thought I Was New Here, Jellyfish, and Sixth Finch. He also publishes somewhat frequently at Ink Node.

Artist Elizabeth Terhune received her MFA from Hunter College and her BA from Oberlin College. She was the recipient of a Yaddo Fellowship in 1998. She has exhibited widely throughout the United States. Her most recent shows include a two-person show at Feast Gallery in Saratoga Springs, NY, a four-person show at Metaphor Contemporary Art in Brooklyn, NY, and a one-person exhibition at the Lake George Arts Project, Lake George, NY. You can view some of her work online at www.elizabethterhune.com, and selected works in the Pierogi Gallery Flat Files, Brooklyn, NY, as well as through the Drawing Center’s Online Viewing Program Artist Registry. She teaches painting and drawing at the 92nd Street Y and at NYU’s School of Continuing and Professional Studies in New York City.