What did you think an artist would pick up on from your poem?
Poet Gibson Fay-LeBlanc: I figured there might be a hockey player somewhere since this is a poem that comes out of that world. Beyond that, I really had no idea. I don’t think in images—I wish I could. I think in words, in their music and meaning, and build poems out of that. I love great images—in art, in movies, etc.—and I’m mystified and astounded by the image Michele created in response to my words.

What inspires you in this poem?
Artist Michele L’Heureux: I love the commentary on masculinity in this poem. As a former athlete and the sister of two brothers who played hockey, I understand oppressive locker-room attitudes about gender and sexuality, which can be pervasive. I appreciate the outward disdain that the poem’s narrator has for his coach’s limited perspective, and I love the language he uses to describe his fantasy for getting even.

Did the visual artist refract any element of the poem that made you see the poem differently?
Poet Gibson Fay-LeBlanc: I love the flames that Michele created here, flames made of text. It is the goalie’s words that spark the poem, that set the speaker on fire. We feel the heat of what the speaker says, in the second half of the poem in particular, though I hadn’t thought of it that way before.

When you began this piece, was it color, shape, or some other aspect that you followed? Did that change?
Artist Michele L’Heureux: I knew that I wanted to include the figure of a hockey player and that I wanted to surround him with language and with something beautiful. I played around a lot with how literal to make the figure and which text to use; these elements changed several times. I also decided mid-way through the process that I wanted the work to break out of the rectangle of the picture plane; it seemed fitting for the subject matter.

What surprised you about this collaborative piece?
Poet Gibson Fay-LeBlanc: I’m surprised at how strongly and viscerally I reacted (and still react) to Michele’s art. I doubt I’ll ever read or think of this poem again without seeing her image in my mind.
Artist Michele L’Heureux: I wasn’t surprised, just pleased.

Have you ever written work that has been inspired by visual art? What was that experience like for you? Why were you inspired to do so?
Poet Gibson Fay-LeBlanc: When I was in grad school, in Manhattan, I had a free pass through school to most of the museums. I liked to go to the MET, which was almost on my way home, for an hour or so and look at one or two things. I wanted to look intently, the way Rodin taught a young Rilke how to look when the poet was working on a monograph of the sculptor.

So I wandered into the MET one day and found this little room filled with all these small sketches by Paul Klee. I looked and looked. I felt like the top of my head had been taken off, as Dickinson said happens when one is in the presence of a poem. I left that day with the beginnings of a couple of new poems, as well as an idea for a character, a kind of alter ego, this ventriloquist, about whom I went on to write a number of poems.

I doubt if I’d have found a way to write about the stuff in those poems were it not for Klee’s work. I titled my first book Death of a Ventriloquist and received permission to put one of Klee’s images on the cover.

If you had to represent the Broadsided collaboration with one word, what would it be?
Poet Gibson Fay-LeBlanc: Tinder
Artist Michele L’Heureux: Score!

If the collaboration were a piece of music, what would it be?
Poet Gibson Fay-LeBlanc: Perhaps something filled with power rock and roll chords and an insistent beat, but with lyrics that cut against that aggressive sound with tenderness.
Artist Michele L’Heureux: “Bohemian Rhapsody” by Queen.

Read any good books lately?
Poet Gibson Fay-LeBlanc: On the subject of flames, I thought Rachel Kushner’s The Flamethrowers was jaw-droppingly great. Also, Mike Paterniti’s amazing, digressive tale, The Telling Room that begins with cheese and ends up being about why we tell stories. I also finally read Tracy K. Smith’s Life on Mars and love the music and tenderness in those poems.
Artist Michele L’Heureux: The Art of Fielding by Chad Harbach; All The Names by Jose Saramago

Seen any good art lately?
Poet Gibson Fay-LeBlanc: I recently returned from several days at the Haystack Mountain School of Crafts in Deer Isle, Maine. I was teaching poetry but we poets were surrounded by artists drawing and making things with fiber, clay, and metal. I’m no good with my hands, and I was astounded by what the artists could do in just a few days. One night, Vaino Kola, who was there teaching drawing, showed us a few recent prints of Maine winter scenes. There’s one in particular—a tangle of trees in snow—that captures both the internal and external weather of that scene so well.
Artist Michele L’Heureux: Tons! I’m in the middle of installing an exhibition of work by four artists for the Wheaton College gallery, and it is turning out to be spectacular: Jodi Colella, Marina Zurkow, Andi Sutton, and Julie Kumar. Come check it out after October 17!

Anything else?
Poet Gibson Fay-LeBlanc: Don’t think I won’t be posting this in ice rinks all over Southern Maine. Anyone who cares to, put it up in a rink somewhere!
Artist Michele L’Heureux: So fun to respond to poetry visually. Can’t wait to do it again!

A post-script from Michele after seeing this page:
I forgot to tell you that Vaino Kola, whom Gibson mentions in his interview, was my most beloved art professor at Wheaton College and has remained a friend and mentor to me for the past twenty-five years. What a small world and an interesting coincidence that reinforces the connection between Gibson’s poem and my art! 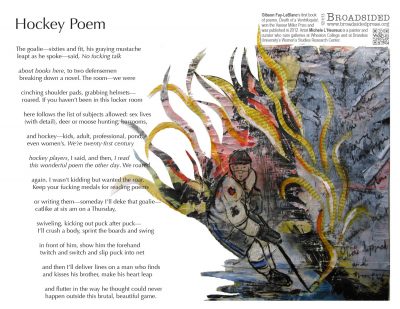 Poet Gibson Fay-LeBlanc‘s first collection of poems, Death of a Ventriloquist, received a starred review from Publishers Weekly, spent several weeks on the Poetry Foundation’s list of contemporary best-sellers, and was featured by Poets & Writers as one of a dozen debut collections to watch. Gibson’s poems have appeared in magazines including Guernica, The New Republic, and Tin House, as well as on the PBS NewsHour Art Beat. He has taught writing at conferences, schools, and universities around the country. In 2011 he was named one of Maine’s “emerging leaders” by the Portland Press Herald and MaineToday Media for his work directing The Telling Room, where he still occasionally teaches writing.

Artist Michele L’Heureux is a painter and curator who runs galleries at Wheaton College and at Brandeis University’s Women’s Studies Research Center. Michele has degrees in studio art and philosophy but has found her diploma in Carpentry from the North Bennett Street School most helpful in life. Her work can be seen at www.michelelheureux.com. This is her first Broadsided Press collaboration.