What made you think of Broadsided for this poem?
Poet Zan Jacobus: I engaged my future-sight abilities and saw Douglas’s artwork: the womb of a solar system, delicately variegated greys pulsing with creation dust and radiant with nascent red stars. I wanted that pairing for this poem.

Ok, my future-sight abilities don’t work very well. But if I had had the ability to see the future, I would been ravenous for Broadsided to orchestrate this collaboration.

What inspires you in this poem? What drew you to it?
Artist Douglas Culhane: The poet’s personal approach to the vastness of cosmic phenomena.

Describe your dream “Vectorization”—where, in your wildest dreams, would you most like to see this broadside posted in the world?
Artist Douglas Culhane: At the W.M. Keck observatory in Hawaii.
Poet Zan Jacobus: My favorite place in Brooklyn, besides home, is Green-Wood cemetery, where the graves go back to the early 1800s.  It is a hilly historic land of huge trees. I’d like people to see our broadside before they go to visit the dead.  We are all so important—to each other, to the people who love us, to ourselves—and also so very unimportant in the scheme of creation and eternity.  We need to remember both.  Also to spend time with old trees.

I would not want it posted inside a spaceship, because until we learn how not to interfere with Gaia’s needs and will, we will only do harm in leaving the earth. We haven’t learned yet how not to reproduce the damage we’ve done to the earth and to each other. I would like the people involved with space exploration to read this poem, though.  They need to understand how small they (we) are and how little they (we) know. So perhaps on the fence at NASA.

The first place I vectorized this broadside, pictured here, was my local subway station.  Would that I could post a new broadside collaboration in every station, every month.

What did you think an artist would pick up on from your poem? Did the visual artist refract any element of the poem that made you see the poem differently?
Poet Zan Jacobus: I wondered whether an artist would work off the contrast of Rho Ophiuchu and a single human life on earth, or stick with outer space. Douglas shows us “the ruffle of red stars,” the pulse of the poem.  Some of this poem is about whether size is an indication of relative importance or beauty–or not.  By not referencing the minutiae of human experience, Douglas gives us the hugeness of time.  The bulging greys, the subtlety of color gradations from light to no light and back again, tell us that there is so much more going on in the universe if you look closely. The red spheres like sparkles among all the greys. The surprising existence of the possibility of life.  The visual similarity to a gravid uterus is there, too.

Did anything shift for you or come into new light as you began working on your visual response?
Artist Douglas Culhane: As I played with cosmic imagery I realized how it relates to much smaller phenomena. The visual affinities between the microscopic and the telescopic are compelling.

Have you ever written work that has been inspired by visual art? What was that experience like for you? Why were you inspired to do so?
Poet Zan Jacobus: I haven’t, but this makes me want to try.

If this Broadsided collaboration were a specific historic moment, what would it be?
Artist Douglas Culhane: The appearance of the B Cassiopeiae supernova (1572).
Poet Zan Jacobus: Eternity

Do you have a favorite, generative prompt to inspire bold, amazing work?
Artist Douglas Culhane: I am always looking for things that ask questions and try to answer them with more questions.
Poet Zan Jacobus: I like to take a group of words which have similar sounds or letters in them—perhaps the same ending, let’s say -ow, which I’ve been working with lately—and make a poem from the group of words.  So throw, fallow, crow, flow, shallow.  I see Douglas’s work plays with words in this way too.

Read any good books lately?
Artist Douglas Culhane: Dunce by Mary Ruefle, Twice Alive by Forrest Gander, Time of the Magicians by Wolfram Ellenberger, The Tangled Tree by David Quammen.
Poet Zan Jacobus: Richard Powers’s Bewilderment. His descriptions of other planets are mind blowing. I also loved The Known World by Edward P. Jones, Fates and Furies by Lauren Groff,  Jubilee by Margaret Walker, Must I Go by Yiyun Li, The Lying Lives of Adults by Elena Ferrente. Just started The Shadow King by Maaza Mengiste.

Seen any good art lately?
Artist Douglas Culhane: The Jasper Johns Show at MOMA is on my list.
Poet Zan Jacobus:  I saw some of James Castle, who mixed soot with his saliva for his drawings and made worlds. Making art can be that elemental and metallic. 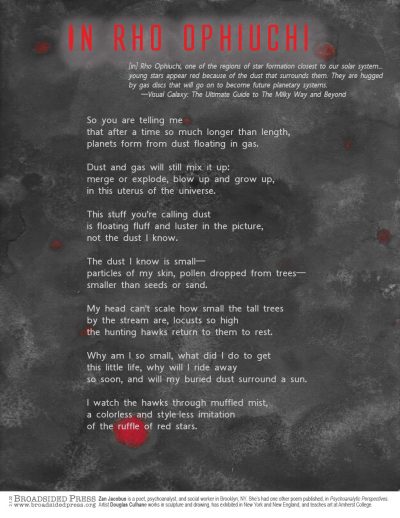 Zan Jacobus is a poet, psychoanalyst and clinical social worker practicing in Brooklyn, NY. She returned to writing after a long absence and began studying with Brooklyn Poets in 2016. She has had one poem published, in Psychoanalytic Perspectives, the journal of her professional organization.