This poem was chosen in response to Ira Joel Haber’s art—can you talk about the experience of finding words that were in conversation with the image?
Poet Catherine Swanson: When I look at the colorful boldness of Ira Joel Haber’s pastel and the cluttered side-of-the-roadness of my poem, I can believe that opposites attract. “The Company of Weeds” began as a moment of fascination recorded in my journal. Because I’m an urbanite who doesn’t wander in the woods often enough, the images were laid out unsuccessfully a few times until I saw this visual, and then something clicked. The poem became what it was meant to be.

I wish I knew how that worked.

What surprises you about Catherine’s poem in conversation with your art?
Artist Ira Joel Haber: Well it’s certainly a nice honor to have a poet write a poem inspired by my art, so the whole thing more or less is a surprise. It goes to show how art can inspire.

What leapt out first from Ira’s art? A particular image? A mood? A line?
Poet Catherine Swanson: The foregrounded image grabbed me immediately, but even after submitting my poem, IÕm still drawn to such things as the blue tone on the lower right and the way the red spreads itself away from the main image. Hmm….I may have to write another poem.

What did you expect a writer to pick up on from your painting?
Artist Ira Joel Haber: Well I would assume the colors and forms might have inspired the writer, but the painting is so open to interpretation that I had no expectations about what the writer would “get”. The getting I guess was good, because the painting is rooted in nature and abstraction at the same time.

Paired with the art, do you think the poem does something different or has a different tone?
Poet Catherine Swanson: I love that my poem is part of this broadside. The whole is greater than the sum of its parts, and the poem is now more than a report from the countryside.

Paired with the poem, do you think the art does something different or has a different tone?
Artist Ira Joel Haber: The words work well with the image. The poem is very personal I can see that and the art is still what I created. It hasn’t changed, I’m sure other poems that were submitted have different takes on the painting. Maybe some were more literal or abstract.

Have you ever written work that has been inspired by visual art? What was that experience like for you? Why were you inspired to do so?
Poet Catherine Swanson: I remember seeing a self-portrait by Vincent Van Gogh years ago. It was a distinct and visceral moment in which I felt I knew him. This experience prompted a poem but left so much more to be said. I also like working with photographs. They capture a split second of time in a way that is especially open to interpretation.

If your poem were an animal, what would it be?
Poet Catherine Swanson: The cat who comes around periodically o sun itself on your back porch.
Artist Ira Joel Haber: My art has bite, so maybe a tiger.

If the broadside collaboration were an animal, what would it be?
Poet Catherine Swanson: A butterfly drying its wings and waiting for the next really good breeze to take it to many destinations.
Artist Ira Joel Haber: I have no idea.

Powerful stuff. The trauma may overpower victims of conflict, but the human spirit is very resilient.
Artist Ira Joel Haber: I’m reading a biography of Vito Russo who was a film historian and gay activist.

Seen any good art lately?
Poet Catherine Swanson: I appreciate that my field research and contact with refugees leads me to people for whom art is in the design of everyday objects and the reverent enactment of custom and ritual.

Anything else?
Poet Catherine Swanson: All students should be given a Broadsided-type collaboration for at least 30 minutes of daydreaming after taking a standardized test….or maybe before.
Artist Ira Joel Haber: Well the tables were certainly turned on me. I’ve had poets write poems based on my art before, and it’s always interesting. It’s a very private thing between the poet and me, by way of my art. It’s a little embarrassing actually to have such a bright light shined on my art.

The Switcheroo is always a surprise for us as editors. First, we wait to see what piece of art the curator will choose. Then we wait to see what literary responses it will evoke. It’s out of our hands. We trust in the fates to converge the creative energy of all involved to do something… magical.

This year, Catherine Swanson’s poem did just that. Escaping traditional pastoral imagery to ground herself in a truck stop where “the highway rolls its noise on your footsteps,” she celebrates the vitality and fierce determination of the under-appreciated weeds. Without directly referencing Ira Joel Haber’s visual piece, she channels the bold patterning and insistent brightness of its yellow background, the prominence of its pod. 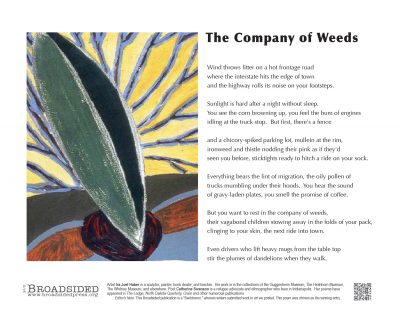 Note: “The Company of Weeds” is the eighth Switcheroo feature from Broadsided. What is The Switcheroo?  Every year, during National Poetry Month, we like to turn the tables and invite writers to respond to art we post, then publish the best collaborations.

We then asked Julie Evanoff, the April, 2010 Switcheroo artist, to choose one that she thought would be open to literary response and would work in the Broadsided format. She selected Ira Joel Haber’s piece.

Of her decision, Evanoff had this to say:

This untitled painting holds my attention with its precarious hovering between the very generalized abstraction of shapes and the very specific delineation of space. My eye wanders between the pod-like object in the front and the yellow root web in the back. The pod refuses to attach to the ground it rests on creating a sense of dislocation that begins to deconstruct the space. This deconstruction of space, first explored in cubist painting, continues to question the presumed pre-existence of unity in our world.
– Julie Evanoff

Artist Ira Joel Haber was born and lives in Brooklyn New York. He is a sculptor, painter, book dealer and teacher who sometimes writes poetry and movie reviews. His work has been seen in numerous group shows both in USA and Europe and he has had 9 one-man shows including several retrospectives of his sculpture. His work is in the collections of New York University, The Guggenheim Museum, The Whitney Museum, The Hirshhorn Museum & The Albright-Knox Art Gallery. In 2004 he received The Adolph Gottlieb Foundation grant. Currently he teaches art at the United Federation of Teachers Retiree Program in Brooklyn.

Poet Catherine Swanson has had the opportunity to observe human interaction in its diversity and connectedness for many years as a social worker, refugee advocate and ethnographer. She often writes about cultural and social justice issues, and her poems have been published in a variety of literary journals in North America and other countries. She is currently working on a book of poems related to her field research as well as a book designed to explore the experience of using public transportation. She was born in Pennsylvania and lived in New Jersey and New York City before coming to the Midwest. Her ethnographic work has taken her to California, South Carolina and other parts of the United States. She currently lives in Indianapolis where she works with refugees resettled from conflict zones.