What is behind your choice of this piece of art in response to Jenny’s poem?
Artist Theodore C. Van Alst, Jr.: Jenny Davis’s poignant reflection on the pain inflicted on our relatives, human and others, tells us that even in the face of those violent actions our kinship networks can save us, and the hands that made these marks on the home of the little school remind me of that fact in ways that few other things can.

What led you to this poem about the Actions at Standing Rock?
Poet Jenny Davis: The ongoing stand-off at Standing Rock has brought so many heart-wrenching and heart-warming moments. I realized that the two extremes were connected: the use of beloved and related things—dogs, water, humans, and even oil (or fossilized kin to borrow from the brilliant Zoe Todd) to harm each other, and the myriad of ways those efforts were thwarted through small and magnificent gestures of generosity, connection, and protection.

What do you think is the role of art in regards to real-world, real-time events? In other words, what makes a “successful” occasional or political piece of writing or art?
Poet Jenny Davis: Art is, at its most powerful, a chance to contextualize and re-contextualize events in ways that prioritize the relationships between the beings, times, and places and the world(s) we all live in. 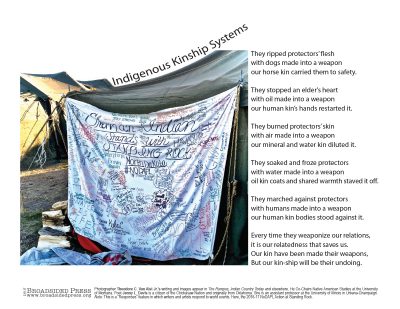 Poet Jenny L. Davis (Chickasaw) is originally from Oklahoma. She is an assistant professor at the University of Illinois in Urbana-Champaign where she lives with her partner and spends most of her time tending her cats (and cat-sized Chihuahua), plants, and the students in her Anthropology and American Indian Studies classes. Her poetry has been published in As/Us, Rabbit and Rose, and River, Blood, and Corn.