A native of Milledgeville, Georgia, poet Sean Hill earned an M.F.A. from the University of Houston Creative Writing Program, where he was awarded the 2003 Michener Fellowship for poetry. His other awards include the Academy of American Poets Prize, Bread Loaf Writers’ Conference working scholarships in 2000 and 2001, an Individual Artist grant from the Region 2 Art Council of Minnesota in 2004, and a 2005 Bush Artist Fellowship. Hill is a Cave Canem Fellow. His poems have appeared in literary journals including Callaloo, Ploughshares, Indiana Review, lyric poetry review, and Pleiades, and in the anthologies Blues Poems and Gathering Ground. His poems have been nominated for a 2004 Pushcart Prize and selected as a “Discovery”/The Nation Prize semi-finalist in 2005 and 2006. Recently his manuscript Blood Ties & Brown Liquor has been selected as a semi-finalist or finalist for several national publication prizes including The Walt Whitman Award. He lives in Bemidji, Minnesota.

Artist Jim Benning is a photographer/designer living in Anchorage, Alaska using images to show how he sees things, places, and people that ignite his curiosity. He says: “As a member of the board for the Alaska Photographic Center I work to bring photographers to Alaska to share their photographic vision and inspiration with the local community.” 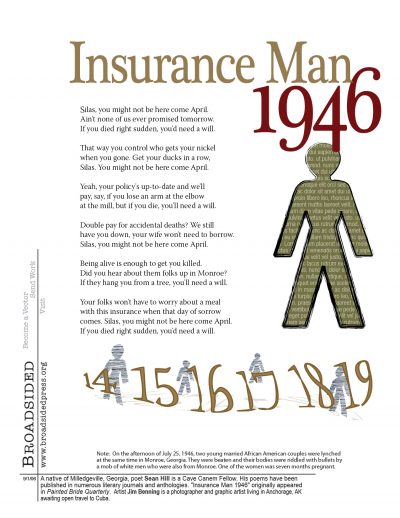