This image was created outside of the usual Broadsided “respond to writing” system—can you talk about its origins?
Artist Kate Baird: I used to drive back and forth between Missouri and the East Coast a lot and always noticed the tall spindly highway signs. They seemed like the signs/markers that they are, but also like strange plants cropping up here and there, fragile and hearty and a little sad.

This poem was chosen in response to Kate Baird’s art—can you talk about the experience of finding words that were in conversation with the image? What leapt out first from Kate’s art? A particular image? A mood? A line?
Poet Brian Hendrickson: Kate’s art reminds me of a dream-gate one might pass through while falling asleep at the wheel, so I immediately recognized the potential for conversation between her work and this particular poem. Both contain peaceful and frantic elements—on the one hand, order, stillness, symmetry; on the other, chaos, momentum, impulse. I found Kate’s art both celebratory and mournful, and I think this poem, as with much of my work, exists in that same space, somewhere between hope and despair. That sounds melodramatic, but I think the British poet Keith Douglas had something similar in mind when he wrote shortly before his death in the Normandy invasion, “To be sentimental or emotional now is dangerous to oneself and to others. To trust anyone or admit any hope of a better world is criminally foolish, as foolish as it is to stop working for it.” It requires an act of revolutionary imagination to make that kind of pronouncement in the face of its inherent irony and with complete sincerity. It’s a sincerity I value and strive to crystallize in my poems.

What did you expect a writer to pick up on from “Interstate”?
Artist Kate Baird: A little bit of drifting, a little nostalgia, some distance or distancing…

Paired with the poem, do you think the art does something different or has a different tone?
Artist Kate Baird: Yes, now the image is bound to a specific personal narrative. I don’t think it had that before.

Paired with the art, do you think the poem does something different or has a different tone?
Poet Brian Hendrickson: Sure. The visual element adds another layer of context, giving the original text a whole new lease on life. I can’t say for sure, but I think it decentralizes both speaker and spoken to, making the poem more universal. Whatever has happened, seeing the two melded together has startled me. After all, artists live and grow with their own work. Even when it takes no more than a day to write a poem (and this one evolved over a much longer period of time), just those few hours spent together are amorphous, like childhood summers. Then all of a sudden here comes the poem, all grown up now and married to this pretty little thing it’s with, walking arm in arm. Is that my poem? Was it ever to begin with? I don’t know what to make of it, really. I guess I’m happy for the both of them.

What surprises you about Brian’s poem in conversation with your art?
Artist Kate Baird: I think the drawing looks sort of feminine and delicate—not really intentionally, but it looks that way to me—and the poem is very forceful, violent in places, and in a male voice. That surprised me, but I was glad about it.

Have you ever written poems in response to art before? What was the experience like for you?
Poet Brian Hendrickson: Although this is more of a collage of one preconceived work with another, I have experimented, with varying degrees of success, at writing a poem in response to a visual cue. I have one based on a postcard from Japan, which isn’t bad, but I mainly remember in my high school writing class our teacher used to pass around travel magazines, and I’d come up with some pretty awful camp that even back then I knew was worthless. One was about a castle that might just have been the one out of Disney’s Beauty and the Beast; I’m cringing now just thinking about it. I don’t know. Some people can really work that angle. I’ll settle for the happy accident or so. Regardless, it’s fun to try.

If your art/poem were an animal, what would it be?
Artist Kate Baird: A moth, or something that migrates.
Poet Brian Hendrickson: I always wanted my spirit animal to be something cool like an owl or a lemur, and I’m worried that someday I’ll meet a shaman who’ll reveal to me it’s something altogether mundane, like a goat. Oh crap, I think it probably is a goat. Maybe that means my poem is a goat, too—one that bites children at petting zoos.

If the broadside collaboration were an animal, what would it be?
Artist Kate Baird: Something that changes form as it grows, like tadpole to frog.
Poet Brian Hendrickson: Kate’s work is more like a fruit bat—a graceful devourer of moths. Our collaboration must be a chupacabra.

Read any good books lately?
Artist Kate Baird: Home, by Marilynne Robinson.
Poet Brian Hendrickson: Among other things, I am currently reading Charles Martin’s translation of Ovid’s Metamorphoses, which I’m really enjoying. It reminds me of a tabloid magazine, only in this version John and Kate turn into serpents and devour all eight of their children.

Seen any good art lately?
Artist Kate Baird: Cynthia Lin’s drawings at the Kentler International Drawing Space.
Poet Brian Hendrickson: As far as classical talent is concerned, I’m continually amazed by the oil paintings of North Carolina artist Chris Sedgwick. If Odd Nerdrum and William Blake had a love child, it would paint a lot like him. If you’re ever in Asheville, you can check out his stuff at the Gallery Minerva, or visit his website at www.crsedgwick.com. Or if you’re into a more modernist aesthetic, I highly recommend the work of Ross Caudill. There’s a very kinetic, almost organic, process unfolding and arrested in his metal-and-resin sculptures that makes them eerily human and reminds me of Schlegel. You can find his work at www.rosscaudill.com.

Anything else?
Poet Brian Hendrickson: Yeah. Thanks, Kate, for letting your artwork make sweet love to my poem. And thanks, Broadsided, for involving me in your multi-pronged guerilla-art tactics. Strength to your sword arm!

What is more universal in the western world than a long stretch of road? The cement path, the struggling plants and animals that crowd in—hazard and relief, a grounding in the where of this particular stretch. And, of course, the road provides endless opportunities for metaphor: journey, solitude, companionship.

Writers sent in a wide range of poems and short prose, and what struck us was the vast range of tone that Kate’s image invited. Nostalgia, anger, regret, sass, loneliness, and intellectual inquiry all voiced themselves in the work we received.

Brian Hendrickson’s poem, originally titled “Hope in the Time of Finches,” roared alongside the image like a semi carrying dangerous goods. It was flammable. It was real. It ranged through bluster and rage and toward doubt and hope. We loved the brash swing of the opening and how the speaker’s shifts mirrored the directional shifts in Kate’s art. It did what we hope for with every Broadsided collaboration: enlarged the conversation by its proximity, made light shine differently through the facets. 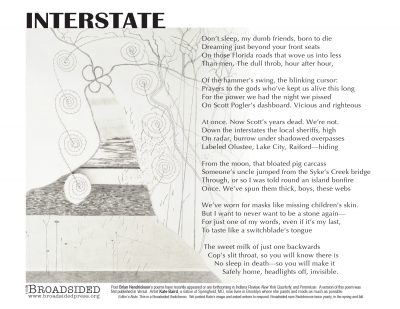 Note: “Interstate” is the 6th Switcheroo feature from Broadsided. What is The Switcheroo?  Every year, during National Poetry Month, we like to turn the tables and invite writers to respond to art we post, then publish the best collaborations.

All Broadsided artists were invited to submit up to three pieces of work for the Switcheroo.

We then asked Helen Beckman Kaplan, Broadsided artist and the November, 2008 Switcheroo artist, to review the submissions, choosing one that she thought would be open to literary response and would work in the Broadsided format. She selected Kate Baird’s piece.

Of her decision, Beckman Kaplan had this to say:

This work drew my attention with its non-specific specificity. It seems delicate and tentative while at the same time expressing a particular sense of place. The deep space seems like a series of thresholds that are being revealed to us through an unfolding of organic systems. The denuded branches and sparse flora also seem part of the unidentified logic. I like the idea of how this would wear over time if posted outdoors.
– Helen Beckman Kaplan

Artist Kate Baird looks for the distances and differences between places through drawing and painting. She received an MFA from the University of Chicago in 2005 and currently works as a teaching artist at the Guggenheim Museum and the Kentler International Drawing Space. She lives in Brooklyn with her husband and daughter, and her work can be seen at www.katebairdart.com.

Poet Brian Hendrickson, a Florida-born ex-Alaskan currently residing in High Point, North Carolina, teaches English and reading at Guilford Technical Community College. His poems have recently appeared or are forthcoming in publications such as Indiana Review, New York Quarterly, and Pemmican. A version of this poem was first published in Versal.