What did you think an artist would pick up on from your poem?
Poet Suzanne Marie Hopcroft: I think I hoped and felt that an artist would pick up on the sense of movement and energy in the poem—that it would be communicable even in an ostensibly static image—and I was right! All of the fundamental concrete elements of the poem are there in Douglas’s piece: the train, the red glove, the blueness of what at first appears to be the sky but on second glance also evokes the idea of water, especially with the poem and its river references set against it. But perhaps more importantly, I think the visuals really convey the breathlessness of the “you” in the poem: the jumble and, yes, the movement of her existence.

What inspires you in this poem?
Artist Douglas Culhane: The movement from the very start straight through to the end without a breath, the way the imagery unspools to create a world. The setting of the poem seems urban, but it is full of details from the natural world. I liked the non-contradictory way these elements meshed. Some of the phrases are at once very particular, but still mysterious. Is the “fiddling under the bridge” actual fiddling (probably not, but could be)? which flowers heal with spikes? why is the rucksack burnt? and what are “larkspur boots?”

Did the visual artist refract any element of the poem that made you see the poem differently?
Poet Suzanne Marie Hopcroft: Well, one thing that I love about the visual art in this piece is the way that it presents a set of very organic-seeming images in response to the industrial decay of the poem’s landscape and the figurative references to natural elements in the poem. The way the buildings are intertwined with vines and the way that greenness introduces itself subtly into the scene really struck me. And I suppose now, when I return to the poem, those organic or wild elements in my own words have a bit more visual primacy for me; they feel less abstract and more tangibly present in the universe of the poem as I envision it while reading.

When you began this piece, was it color, shape, or some other aspect that you followed? Did that change?
Artist Douglas Culhane: There was so much imagery to work with. I wanted it all to flow along with the poem. I usually avoid being literal but I could not resist the poem’s imagery: the train, the one red glove.

What surprised you about this collaborative piece?
Poet Suzanne Marie Hopcroft: I think I was surprised by how possible it was to visually concretize and synthesize so much of the poem’s rather disjointed imagery. The poem is very much about that jumble that I mentioned above, about the disconnected yet linked elements of a chaotic life, and maybe that could have been difficult to approach visually—but I think this image does an incredible job of simultaneously representing so many of those elements.
Artist Douglas Culhane: So much color! I think fading out the center of the image to accommodate the text was a good move.

Have you ever written work that has been inspired by visual art? What was that experience like for you? Why were you inspired to do so?
Poet Suzanne Marie Hopcroft: I actually have a poem percolating in my brain that I’ve been planning since I saw a Chihuly exhibit in Seattle over Christmas, where the glass installations outside at night were lit up next to the Space Needle; the two spectacles as neighbors were sort of fantastic and mind-boggling, and I think there’s something there that needs expressing verbally. Other than that, I think the closest I’ve come is with a poem I recently wrote that’s based in part on a political documentary! Of course, now I want to expand more into ekphrastic territory after doing this with Broadsided….

If you had to represent the Broadsided collaboration with one word, what would it be?
Poet Suzanne Marie Hopcroft: Invigorating
Artist Douglas Culhane: Simultaneity

If the collaboration were a piece of music, what would it be?
Poet Suzanne Marie Hopcroft: Copland’s “Appalachian Spring”—the organic, slow-growing, subtle parts and the frenetic, insistent, rousing parts.
Artist Douglas Culhane: A string quartet, with a lot of counterpoint.

Read any good books lately?
Poet Suzanne Marie Hopcroft: I’ve been reading Edith Wharton’s In Morocco (a fascinating and sometimes facepalm-inducing travel narrative) and also rereading Nella Larsen’s Passing for a class I’m teaching… that one is incredible.
Artist Douglas Culhane: The Earth Avails by Mark Wunderlich, Vibrant Matter, a political ecology of things by Jane Bennett, the New Directions facsimile printing of Spring and All by William Carlos Williams.

Anything else?
Poet Suzanne Marie Hopcroft: This was a very, very cool experience. I’m honored that Broadsided chose my poem for this mid-winter broadside!
Artist Douglas Culhane: I loved reading and rereading this poem and look forward to reading more of Suzanne’s work. I still don’t know what larkspur boots are. 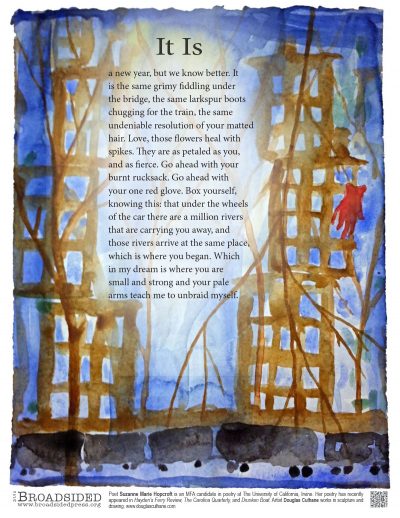 Poet Suzanne Marie Hopcroft is an MFA candidate in poetry at The University of California, Irvine and has degrees in literature from Columbia University and Yale University. Her poetry has appeared in Hayden’s Ferry Review, The Carolina Quarterly, Valparaiso Poetry Review, Drunken Boat, and Southern Humanities Review. Originally from rural Connecticut, she also lived in New York City and Long Beach, California before moving to beautiful Irvine with her fiancé.