Note: This broadside is part of our annual translation special feature. Our Translations Editor is CMarie Fuhrman. She selected two poems—one from a forthcoming publication from The Ofi Press, one by a poet writing in a language indigenous to the Americas. We are grateful for her time and vision. Of her choices, she had this to say:

2020 has challenged all of us in so many ways.  One of those is to learn a new language.  The language of Pandemic.  Of COVID.  We learned words like intubation and acronyms like PPE.  Phrases such as social distancing became daily speak.  And through it all, we found new ways to communicate. We became Zoom proficient and met in Google Rooms rather than the places we gathered before. It was a matter of survival, spiritually, physically, and as a community.  This pandemic will forever change us, and the language will change our culture.
Language and culture are married.  One creates the other.  This is why we find the Broadsided Translations issue so important and why we always choose to bring in languages that are just waking or languages we may not be as familiar with.  Because they are more than just words on a page.  They are civilizations. They are a matter of survival.
The stories each of these poets tells is a story they could find only in their language, or, in Manny’s case, in the combination of the two.  Poet Janil Uc Tun worked with translator Don Cellini to share his world.  If one does not speak Spanish, the words on the page mean nothing, or very little. Don opens the words by translating them and for those of us whose first language is English, we look into Janil’s world and there we see a beauty we can recognize. A beauty that artist MJ Levy Dickson recognized as she created her own translation, a translation into art, a communication that preceded even words. All of this leads to understanding and to a community that knows neither walls nor borders.
The Diné that poet Manny Loley writes looks so much like the stalks of corn he writes about.  Manny lives in the world of both of these languages and merges them to tell his story.  Moreover, he keeps the language of his ancestors alive that his predecessors may better know who they are.  The words are like the pollen in the poems they seek the fertile soil for survival.
As we go forward from this year know that the language we carry is the tool future generations will use to build and repair and maintain the beauty in their culture.  Let those tools also be border-free and know that even when the words are new and unknown to us, we can understand and respect their importance to all of our survival.

What surprised you about this collaborative piece?
Translator Don Cellini: On first seeing the broadside, I immediately noticed the wonderful parade of evergreens fluttering up to the sky like a tail on a kite.  But on subsequent viewings and still, I am seduced by the wavy grey lines that form the background.  Are they ridges to a mountain?  The soggy paper bag in the poem?  The sweat from the clouds?
Poet Janil Uc Tun: The ability to build networks and bridges between different views of different geographies, which are empowered by the same starting point, in this case, the fragment “IV” of Collection of Insects that Flew Around My Head.
Artist MJ Levy Dickson:  The imagery. The flow from thought to image. Each word has a visual context.

Do you see an overlap between the act of translation and the act of responding visually to a piece of literature?
Translator Don Cellini: The visual artist and the translator are both asked to respond by interpreting the text.  The artist may have more creative freedom in that response.  We expect visual artists to be “creative.”  The translator is expected to be a bit more “faithful” in re-creating the text in the new language, although there are many very creative translations.
Artist MJ Levy Dickson: Sometimes the grace of Spanish words doesn’t translate into English. This piece is beautiful in both languages.

Why this poem?
Artist MJ Levy Dickson:  I was struck by the image of the earth as a kite with green trees hanging from its tail.

If this broadside were a type of weather, what would it be?
Translator Don Cellini: This poem, this collection of poems, is always autumn-into-winter for me.  There is a certain sadness and resignation that happens in the poems, much like moving from the colors of autumn into the cold, starkness of winter.  Of course, this is autumn-into-winter for me in the Midwest US.  It’s not the seasonal change of the poet in the Yucatán.
Poet Janil Uc Tun: Autumn.
Artist MJ Levy Dickson: Typical New England weather, constantly changing.

How does translation fit into your creative life?
Translator Don Cellini: Being a poet makes me a much better translator of poetry.  I’m very respectful of the poet’s original language and try to understand what the poet is doing before beginning a translation.  I’m more sensitive to word sounds and images and have slowly learned to rely less on the language of the original and to trust the feel or the sense of the original.
Artist MJ Levy Dickson: Visual art does not need to be translated. It crosses cultures and borders without words.

Read any good books lately?
Translator Don Cellini: I have read a lot during the past several months but by far the best book has been Memoirs of Hadrian by Marguerite Yourcenar.  She has taken the well-known facts of Hadrian’s life and turned them into a novel in the form of a letter from Hadrian to his successor Marcus Aurelius.  I know I will go back to it again.
Poet Janil Uc Tun: Yes, Stone Poems by Don Cellini.
Artist MJ Levy Dickson: During a pandemic? “Good” has a different context! Thank goodness for authors. At least when I read a book I feel I have control. I can put the book down if I want, and I can pick it up when I want. I can be anywhere, indoors or outside. National Geographic has done the best job of writing about the coronavirus and I feel like we are experiencing a narrative in real time. I am beginning a series based on Moby Dick by Melville.

Seen any good art lately?
Translator Don Cellini: Museums are just reopening here, but I was fortunate to see Yayoi Kusama’s “Fireflies on the Water” recently.  It was a magical moment.
Poet Janil Uc Tun: The street art being produced by Calle Estampa.
Artist MJ Levy Dickson: I have created a class I teach on Zoom. I take participants all over the world looking at art through time and space on the Internet, anything from the quilts of Gee’s Bend, Alabama to cave paintings of hands in Argentina. We can look at hands painted in Indian miniatures, to hands in Chinese scrolls, to hands in Western portraits.

Anything else? (Here, we invite the collaborators to invent a question, add a comment, or otherwise speak to what the questions so far have not tapped about their Broadsided experience).
Poet Janil Uc Tun: May Broadsided Press keep up this wonderful work for many years to come.
Artist MJ Levy Dickson:  This project has been a joyful and thoughtful experience during a time of uncertainty. The poem inspired me to stretch my artistic practice and push visual and technical skills. Working with you has provided a connection at a time when isolation presents a disconnect. 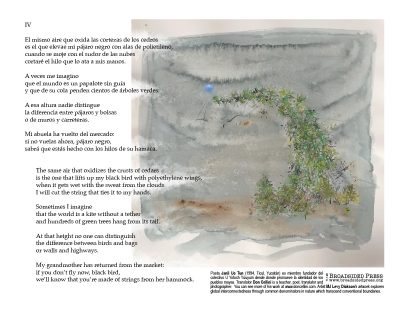 Translations Editor CMarie Fuhrman is the author of Camped Beneath the Dam: Poems (Floodgate 2020) and co-editor of Native Voices (Tupelo 2019). CMarie is a regular columnist for the Inlander, Nonfiction editor for High Desert Journal, and Director of the Elk River Writers Conference.  She resides in the mountains of West Central Idaho.

Translator Don Cellini is a teacher, poet, translator, and photographer.  A recipient of fellowships from the King Juan Carlos Foundation and the National Endowment for the Humanities, he is professor emeritus at Adrian College and the translations editor for The Ofi Press, CDMX. You can see more of his work at www.doncellini.com.

Janil Uc Tun was born in 1994 in Ticul, Yucatán and received  a degree in Latin-American Literature from the Autonomous University of Yucatán in 2016 and in Art Education with a specialty in Creative Writing from the State Center for Fine Arts in 2014.  In 2019 he won the XIX José Díaz Bolio Peninsular Prize in Poetry sponsored by ProHispen Peninsular, Inc. and published by The Ofi Press as the chapbook Colección de insectos que volaron sobre mi cabeza / Collection of Insects that Flew Around My Head.

Artist MJ Levy Dickson has taught at MIT, Wenzhou-Kean University in China, and the Studio One Program of Fountain House in New York. Working with all ages who have limited vision, mental health issues, on the autism spectrum, and others with special needs has honed her instinct for art as communication. She provides a counterpoint to a culture in which emotions are intellectualized and verbalized—yet not available to everyone in these forms. Encompassing thought and meaning visually, tactilely, and aurally, she offers a bridge by which diverse audiences can experience the unexpressed.