Note: This broadside is part of our annual translation special feature.  This year’s guest editor is CMarie Fuhrman. We are grateful for her time and vision. Of her choices, she had this to say:

Last January I spent a few weeks in a country whose language I did not speak.  I often had to rely on translators or a phone app to say what I needed to people along the way and to understand what they were saying to me. I could never say all I wanted.  Never make small talk. I felt like I was horribly rude, coming to a country and not knowing the language, and I felt vulnerable—think of all the ways words protect us and what we miss when we cannot communicate with others.  This made me think of ancestors, in the US and other countries, who have had their Native languages taken from them even as they remained on their own land. To disallow a language denies honest communication and can kill an entire culture.

What great comfort to know that some of those sleeping languages are awakening.  I chose the work of these three poets as proof of the power of language and of culture and because of the perseverance of these men who keep it alive in their bodies and poems.  I invite you to look closely at the words in all the languages. Lose yourself in the Tlingit lines that flit and sing like the birds Ishmael Hope writes of. Try, as I did, to sing the words of Malångu i maga’håga!  and hear the song and urgency, smell the fire and sea air in Jay Pascua’s Guam. Nigerian writer Akpa Arinzechukwu’s muscular lines hold thousands of years of survival and tradition as well as a beauty that comes from vulnerability and honesty.  These poets each have collections of work that will broaden your world in any language and I know you will enjoy their words and the accompanying images as deeply as I do.

What surprised you about this collaborative piece?
Poet Ishmael Hope: This is completely new to me. But I love the birds that go with the poetry! It’s delightful.
Artist David Bernardy: In some ways, I was surprised at how spare the visual is. The first image I attached to was the songbird, but then there is so much more great stuff in Ishmael’s work, I sort of thought I would be trying to evoke all of that.  Finally, though, my sense of it was that it need to be much quieter, much more open.

Do you see an overlap between the act of translation and the act of responding visually to a piece of literature?
Poet Ishmael Hope: As Robert Bringhurst said, translation brings “the news” from other cultures and languages. Responding visually to a piece is similar in the way that one work of art inspires another and inspiration is needed in order to successfully translate.
Artist David Bernardy: I do… There is the act of finding/making images that appear directly in the poem.  Like the birds. I think of those as sort of a direct translation, like word to word, or word to image, if you want. But then there are the lines in the poem that speak to a sort of generational voice, the trembling of the stars, the smell of the rain’s aftermath. The challenge, much like translating a metaphor from one language to next, is trying to make an image that somehow complements that feeling, whether it be shape or color or a sense of open space.

Why this poem?
Poet Ishmael Hope: CMarie Fuhrman, a delightful Indigenous poet and literary builder, asked me to write a poem in both my heritage language, Tlingit (the other is Inupiaq), and in translation. It could have been something previously published, but I wanted to make a whole new piece. It was fruitful. I really saw how you can write a poem in Tlingit—that thoughts form wholly in the language if you learn it well. I’ve written in Tlingit before, but at this point I felt a sense of play, which I attribute both to my language acquisition and, more importantly, to the trust and appreciation I have for CMarie.
Artist David Bernardy: I was attracted by all the physicality of the poem: the coffee, the cottonwood, the mud, the bones. I found all these, paired with the title, irresistible.

When you consider all three broadsides of this folio together, what comes to mind?
Poet Ishmael Hope: It would be great to print them out and put them up where I love, in Juneau, Alaska, a traditional Tlingit territory that, at its best, is a literary and art hub.

Describe your dream “Vectorization”—where, in your wildest dreams, would you most like to see this broadside posted in the world?
Poet Ishmael Hope: In Japan, where my son would love to visit. In Paris, where our family wants to visit. But other than that, in Alaskan communities, communities close to where I live and dream.
Artist David Bernardy: If there were a way for these Vectors to be converted into smoke signals, I’d love to see this collaboration floating over the horizon somewhere south of Tucson.

If this broadside were a type of weather, what would it be?
Poet Ishmael Hope: Well, whatever the weather of the poem. Mud gets mentioned. Maybe it’s rainy.
Artist David Bernardy: I think of it as that fresh stirring of wind that comes just before a welcome rain.

You write your poems in both English and Tlingit–how do you balance the nuances and sounds of each language in your poems?
Poet Ishmael Hope: I favor Tlingit. But, as the late Richard Dauenhauer said, “if it sounds good in Tlingit it should sound good in English.” So I balance it, knowing what I know of English and that I am a poet of the English language. I balance it not by stretching the meaning or intention, but finding just the right touch, if I can, that conveys the news the poem provides in Tlingit.

Read any good books lately?
Poet Ishmael Hope: I read biographies all the time. On Federico Garcia Lorca, Pablo Neruda, Willem de Kooning. But I love the poetry of Erin Hollowell, Joan Kane, Ken White, Tiffany Midge, Caroline Goodwin, Tommy Pico, and too many others to name.
Artist David Bernardy: I’ve been trying, once again, to make it all the way through Anna Karenina.  I always enjoy the attempt, though, so far, I’ve never finished. Good news, though; I am now further than I’ve ever been.

Seen any good art lately?
Poet Ishmael Hope: Yes, by Alison Marks, Lily Hope, Nick Galanin, Jerrod Galanin and many others! Also on the fine broadsides!
Artist David Bernardy: I’ve enjoyed seeing the work of Toshiyuki Enoki on Instagram.  You can check him out here: https://www.toshiyukienoki.com/gallery

Anything else? (Here, we invite the collaborators to invent a question, add a comment, or otherwise speak to what the questions so far have not tapped about their Broadsided experience).
Poet Ishmael Hope:  This was very fun. Thanks so much!
Artist David Bernardy: Thanks to all the good folks at Broadsided for bringing these voices to all us eager readers.  And thanks to Ishmael for this lovely poem. 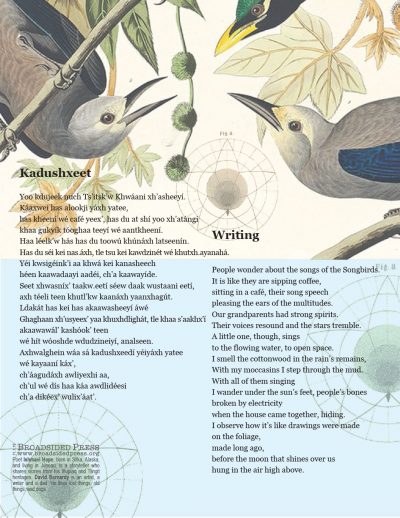 Translations Editor CMarie Fuhrman is the author of Camped Beneath the Dam: Poems (Floodgate 2020) and co-editor of Native Voices (Tupelo 2019). CMarie is a regular columnist for The Inlander, Nonfiction Editor for High Desert Journal, and Director of the Elk River Writers Conference.  She resides in the mountains of West Central Idaho.

Artist David Bernardy is an artist, a writer, and a dad. He likes lost things, old things, and dogs. www.davidbernardy.com