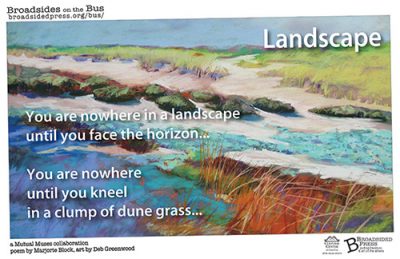 Deb Greenwood teaches art at the Cape Cod Lighthouse Charter School in Orleans, is the Art Director of the Cape Cod Sea Camps, and is Education Coordinator for the Cahoon Museum of Art in Cotuit. Her work has received awards from the Cape Cod Art Association and the Arts Foundation of Cape Cod. She lives in Brewster.

Poet Marjorie Block, a retired English and Creative Writing Teacher, is a member of the Outer Cape Line Breakers and The Narrow Land Poets. Her poems have appeared in literary journals and anthologies. She won 1st place in the Prime Time Cape Cod 2011 Writing Contest. Recently she published her first book, Where One Thing Becomes Another, a collection of her poems along with photographs by Allan Cole.