What made you think of Broadsided for this poem?
Poet Stephen Scott Whitaker: Small presses are the heart of American letters. Broadsided Press offered an opportunity to participate in a rich tradition; this is my first broadside! I love the fact that these broadsides can go anywhere in the world. A lot of my recent work is sound-centered, inspired by snatches of hums or whistled tunes heard as a child, a grandfather’s mumblings, or a choral abstraction of syllables. I’m interested in threading sound with concrete language for contrast and harmony. Broadsided Press, I’m happy to say, proved to be interested in those intersections.

What inspires you in this poem? What drew you to it?
Artist Sara Tabbert: The precision of the moment, the verbal description of concentration, excitement, dread.

Describe your dream “Vectorization”—where, in your wildest dreams, would you most like to see this broadside posted in the world?
Poet Stephen Scott Whitaker: The romantic in me wants to find this on the side of some pub, a part of the city’s humanity. Likewise, I’d love to see this broadside on the side of some barn in the middle of nowhere, a marker on the fringes of man’s world where nature runs riot. I live in a small town on the edge of soybean fields, a constant reminder that the natural world dwarfs me, that I am small. Poems are like that, small, bright objects in a field. Poems are small, my place in the world is small.
Artist Sara Tabbert: In an old, infrequently accessed hunting cabin.

What did you think an artist would pick up on from your poem? Did the visual artist refract any element of the poem that made you see the poem differently?
Poet Stephen Scott Whitaker: I had no idea what the artist was going to do, but I am ecstatic about it. The rabbit is so pretty, so handsome. It makes me think of Watership Down, a favorite novel. The rich texture Tabbert infused in the picture is so enticing. I am rooting for the rabbit in this case, not the child hunter, who doesn’t want to kill the rabbit.

When you began this piece, was it color, shape, or some other aspect that you followed? Did that change?
Artist Sara Tabbert: I know the goal of Broadsided for the artist is not to be directly illustrative, but in this case I couldn’t shake the image of the rabbit’s start, that realization on the part of the game that something is happening. I thought that idea was best expressed in a fairly literal way. The poem connected to my own history as a rabbit eater (not hunters, but my family raised them for meat). I took the liberty of making it a snowshoe hare in its summer coat, an animal I see or see evidence of every day.

What surprised or struck you once you saw the finished broadside?
Poet Stephen Scott Whitaker: Those lines! I can clearly imagine Tabbert shaping this print. It is both a striking picture of a badass rabbit and a memory of the artist’s motions. I wish I could run my hands over the actual wood. I have to admit, it also made me think of chocolate bunnies.
Artist Sara Tabbert: I liked the reversal of the image under the text—it’s a very nice visual nod to the printmaking process.

Have you ever written work that has been inspired by visual art? What was that experience like for you? Why were you inspired to do so?
Poet Stephen Scott Whitaker: Ekprhasis is important. Having dialogues with works of art in other genres is so integral to the process of poetry, regardless of the outcome. Some of my best failures have been inspired by other art. Cinema is a touchstone for many writers, music as well. We should all be having more conversations with works of art we love and are touched by, to say nothing of the importance of artistic dialogues with other people.

How does literature fit into your creative life as a visual artist?
Artist Sara Tabbert: I don’t know exactly how it affects my work, but I listen to books most of the time I’m working. I often remember and associate the things I heard with the pieces themselves, though their impact is subtle if there at all. Someday I’ll be able to afford an Audible subscription, but for now I’m limited to our public library’s offerings. In some instances, the term “literature” is a stretch (such as a very large public piece I did while only listening to Swedish murder mysteries!). Some really great stuff gets into my head as well.

If this broadside were a type of weather, what would it be?
Poet Stephen Scott Whitaker: A warm summer evening, an hour before sunset. A bright sheen to the light, breezy and serene, a mundane danger lurking.
Artist Sara Tabbert: Long fall sun, just starting to cool off for evening.

Read any good books lately?
Poet Stephen Scott Whitaker: American Sonnets for My Past and Future Assassin by Terrance Hayes, Meg Day’s  Last Psalm At Sea Level, Solmaz Sharif’s Look, Beth Bachmann’s Cease, Walter Bargen’s My Other Mother’s Red Mercedes, and Nancy Mitchell’s The Out of Body Shop.
Artist Sara Tabbert: I’m re-reading Richard Ford’s series that start with The Sportswriter. I love those novels and read them all every few years.

Seen any good art lately?
Poet Stephen Scott Whitaker: For our anniversary, my wife and I hit the Chrysler Museum in downtown Norfolk for an amazing installation of Vik Muniz’s work, plus its permanent collection. Particularly enjoyed Nick Cave’s “Sound Suit.” I wish I had one I could wear to work, Pocomoke High School, where I teach English and Drama.
Artist Sara Tabbert: This fall I biked from Pittsburgh to DC and took a few days to binge on art at the end. For some reason I had decided ahead of time that I was not going to be particularly interested in the Art of Burning Man show at the Renwick—maybe because Burning Man sounds like an introvert’s nightmare—but I actually loved the exhibit. 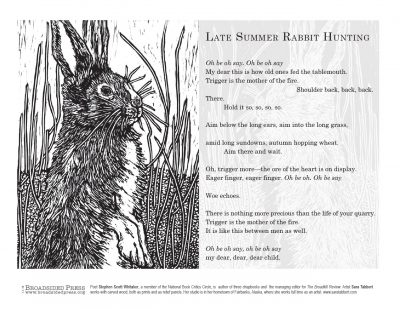 Poet Stephen Scott Whitaker (@SScottWhitaker) is a member of National Book Critics Circle and the managing editor for The Broadkill Review. His poems have appeared in Oxford Poetry, Grub Street, and Anderbo, among other journals. He is the author of three chapbooks, including the Dogfish Head Poetry Prize winning Field Recordings and the USA Book Award nominee, All My Rowdy Friends.

Artist Sara Tabbert works with carved wood, both as prints and as relief panels. Her studio is in her hometown of Fairbanks, Alaska, where she works full time as an artist. Her work ranges from intimate pieces on paper to large public commissions. She received a BA in studio art from Grinnell College and a MFA in printmaking from the University of Nebraska, Lincoln. Recent residencies include Zygote Press in Cleveland and the Taft-Nicholson Environmental Humanities Center in Montana.