Did the visual artist refract any element of the poem that made you see the poem differently?
Poet Jon Ballard: Yes, definitely the woman in the poem. Because, of course, I had my own idea of who she was and what she looked like. As I was writing the poem my own image of her shape-shifted a bit, but now the woman’s image is set in stone, so to speak. I see her as more prim, now, wrapped in her white gloves and big coat and her strange, ill-fitting wig (I thought it was a hat at first…is it?), as if she’s off to an evening tea party or bridge game. And that imprecise look on her face, somewhere between impatience and a reckoning.

What inspired you to “dibs” this poem?
Artist Lisa Sette: It felt like night.

What did you think an artist would pick up on from your poem?
Poet Jon Ballard: I couldn’t be sure. I suspected the idea of the calendar that sets the poem going might be a trigger, as it was for me writing the poem.

What first leapt out at you from the poem and what was your gut response?
Artist Lisa Sette: “Yet years // Of looming ebb haunt you less than this // Very night, which is coming on fast, chasing / You down….” I like the idea of night coming on and chasing you down. Night does weird things to people. it changes their behavior. That’s when anxiety hits you. That’s when you see how people respond to stress and loneliness and heartache.

What surprised you about this collaborative piece?
Poet Jon Ballard: The biggest surprise for me is the feeling (I may be wrong) that the artist senses the idea of dislocation I hoped to convey in the poem. The woman in the poem is stranded to a degree, if not physically then certainly emotionally, and the night “coming on fast” is no friend. The artist, I think, captures that.
Artist Lisa Sette: The way it pulled together my idea of what Jon was trying to say. That figure spoke to that poem for me. I didn’t know if I’d be able to make an image that would speak. There’s so much chance to photography, but that moment in the street at night… it was the right one.

When you begin a piece of visual work (or, if that’s too broad, when you began this piece), is it color, shape, or some other aspect that you follow?
Artist Lisa Sette: Color and light. Color is second, though. It’s all about light. Without light, there’d be no color. Light is tone. It’s emotion.

If your poem were a city, what would it be?
Poet Jon Ballard: I’m thinking of Troy, Michigan, a collection of roads, shopping areas, and sub-divisions, but with no downtown, no center; a “city” whose most discernible quality is a discomfiting void or absence.

If your art were a city, what would it be?
Artist Lisa Sette: Amsterdam

If the Broadsided collaboration were a city, what would it be?
Poet Jon Ballard: Any out-of-season, seaside resort town.
Artist Lisa Sette: I really don’t know.

Have you ever written work that has been inspired by visual art? What was that experience like for you? Why were you inspired to do so?
Poet Jon Ballard: Rarely. I don’t feel a sense of urgency in reinterpreting someone else’s vision of the world. I’ve done it, but it’s usually a fairly joyless experience. I don’t know, I imagine it’s like the singular melancholy of the tattoo artist: you’re able to leave your mark, but it’s still their body.

Why do you think this artwork works?
Artist Lisa Sette: The woman’s expression—her mind is working, but she’s keeping it all buttoned up. She looks a little crazy. Things are not right in that image—if you look too long, you see that she’s wearing a wig, that things are just not right. But the mood is right.

If you had to represent the broadside, “Late,” with one word, what would it be?
Poet Jon Ballard: Stranded
Artist Lisa Sette: Loneliness

Read any good books lately?
Poet Jon Ballard: Jim Harrison’s new novel, The English Major. It is characteristically brilliant and original. I’ve also been reading Stephen Dunn’s recent, beautiful poetry collection, Everything Else in the World. Such a book sends an unmistakable and urgent message to a poet like me: keep working at your craft or get the hell out. His poems are like raps on the knuckles, as administered by a lovely woman—I appreciate the beauty in the warning.
Artist Lisa Sette: Possession, by Valerie Martin. It’s about a slave owner in the 1800s.

Seen any good art lately?
Poet Jon Ballard: “Peasants,” by Diego Rivera, because a print of this work is hanging on my wall now. Also, I recently came across an old calendar I’d saved that presents a different black and white publicity still of Audrey Hepburn for each month of the year. It’s just an old $8 calendar, yes, but did I mention the Audrey Hepburn shots? That’s art.
Artist Lisa Sette: No… but I’m going to hear David Byrne this weekend. 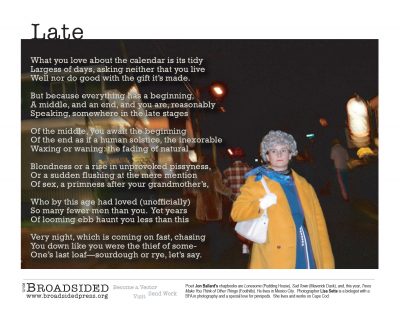 Poet Jon Ballard received his MA in English from Oakland University in Rochester, Michigan, and has taught writing and literature at Oakland Community College in Royal Oak, Michigan. His work has appeared in The Valparaiso Poetry Review, The MacGuffin, Barnwood Magazine, Blue Earth Review, Soundings East and many others. He is the author of three poetry chapbooks: Lonesome (Pudding House, 2007), Sad Town (Maverick Duck Press, 2007), and Trees Make You Think of Other Things, recently released from Foothills Publishing. Another, entitled Such Small Rain, is due out in 2009 from Pudding House. A Michigan native, Jon has lived in Mexico City, Mexico since 2006.

Artist Lisa Sette holds a BFA in photography and a master’s degree in biology.