What is behind your choice of this piece of art in response to the topic “Guns in American Culture”?
Artist Sandra Cohen: The over-zealous quality of gun defense by gun owners needled continuously by the fear-mongering gun lobby has become ludicrous. The refusal to see the reality of the problem, especially after so many recent gun-related tragedies, correlates in my mind with the over-zealous defense of hate by some people who believe they hear the word of God.

Why did this piece of art resonate for you or seem like it would give you an avenue into writing about this subject?
Poet Daniel Aristi: I was first drawn towards the hugely dissimilar meanings that the various sets of hands in the painting convey through what in fact amounts to very minor variations in the position of the fingers: two hands together for praying, two hands together (but with some flexed fingers) to simulate a gun. Murder or redemption – fully opposing propositions – depend on whether a couple of fingers get bent or are kept straight. I found this concept fascinating.

Second, I’m Spanish and have spent some years living in South America, which helps me combine English and Spanish when writing poetry. The hands in the painting struck me as being Latino imagery, possibly the hands of Virgin Mary as we see her depicted in street and tattoo art in the LA area. This speaks to me of ethnicity and violence, against a Hispanic backdrop…

What surprises you in the poet’s response to your artwork?
Artist Sandra Cohen: I love the avant-garde quality, the mix lyricism and story. I was surprised that Daniel’s writing brought to my mind another piece I’d submitted for this collaboration, one he could not have seen!

What do you think is the role of art in regards to real-world, real-time events? In other words, what makes a “successful” occasional or political piece of writing or art?
Artist Sandra Cohen: Honesty.
Poet Daniel Aristi: I’d say that writing and art certainly have the ability – not sure about the obligation, though – to add their voice to the political discourse of the moment. Zola’s open letter J’accuse during the Dreyfus affair in France comes to mind.

As for the level of success of such a political piece of art, I would say that it needs to both contribute to the political goal it has set itself to achieve and, at the same time, it needs to be considered a good piece of art for art’s sake, irrespective of the political context. In my mind, some of the propaganda posters of the Soviet Union in the 1960s would fulfill this double aim.

If the Broadsided collaboration were a piece of music, what would it be?
Artist Sandra Cohen: Something by Charlotte Gainsbourg, Massive Attack, or David Shire.
Poet Daniel Aristi: I would go for a mariachi-inspired type of piece…or something from Los Lobos!

Seen any good art lately?
Artist Sandra Cohen: The Obama portraits are going to be awesome (I saw the artists Kehinde Wiley and Amy Sherald profiled in the New York Times); puzzle portraits of twins by Alma Haser.
Poet Daniel Aristi: I recently visited the Ethnographic Museum of Geneva (MEG) and it has got gorgeous artifacts from all over the world.

Anything else? (Here, we invite the collaborators to invent a question, add a comment, or otherwise speak to what the questions so far have not tapped about their Broadsided experience).
Artist Sandra Cohen: I love your mission to bring art to everyday places—very proud to be a part of it! 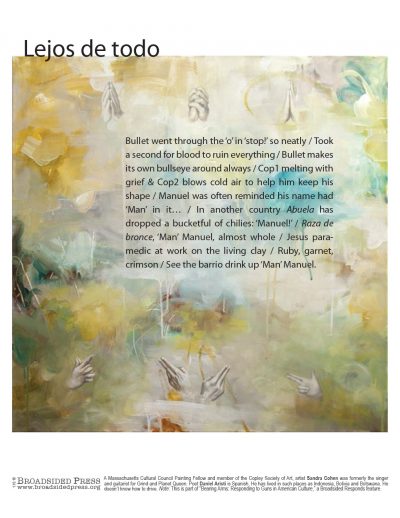 Sandra Cohen studied fine art at Parsons School of Design, the SMFA, and the Art Institute of Boston. A Massachusetts Cultural Council Painting Fellowship recipient for 2008 and a member of the Copley Society of Art, she was formerly the singer and guitarist for Boston bands Grind and Planet Queen.

Daniel Aristi was born in Spain. He studied French Literature as an undergrad (French Lycée in San Sebastian). He now lives and writes in Switzerland with his wife and two children. Daniel’s work is forthcoming or has been recently featured in Dewpoint, decomP, Temenos Journal, and Permafrost. His prose has been included in the 2016 edition of The Best of Small Fictions anthology. Daniel is a Pushcart nominee.