What is behind your choice of this piece of art in response to Bryce’s poem?
Artist Theodore C. Van Alst, Jr.: The way this stretch of the river pulled the sky in, pulled the blue up, made the pulse visible, rendered this vein of the earth one of the “rivers buried beneath your feet” wherever we may go.

What led you to this poem about the Actions at Standing Rock?
Poet Bryce Emley: My fiance is Native, so even though I’m not, I pay a lot of attention to these issues, especially from the lens of the race who’s historically oppressed (and continues to oppress) them. I wrote the poem from that voice, addressing protesters in second-person. Since I wasn’t there, this felt like a way to connect with the cause, access it from a distance, and consider how this social and environmental issue is founded on a severe lack of understanding and consideration from a people, an industry, and a government that still consider an entire race of people nothing more than an inconvenience.

What do you think is the role of art in regards to real-world, real-time events? In other words, what makes a “successful” occasional or political piece of writing or art?
Poet Bryce Emley: Whatever reaches the people who need it. I think that’s all you can ask for. I’d cynically guess that it’s rare for a work of art to change someone’s mind about a political or social issue. I don’t know that that’s always the goal, either. But I think that kind of art needs to be accessible enough (in multiple senses) to show its face and be felt and at the very least be an emotional bridge to the people who aren’t experiencing the events themselves. 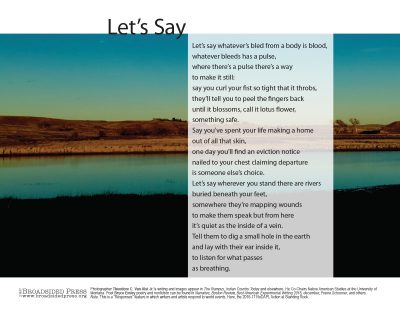