What made you want to submit this poem to our “Dear Queer” feature?
Poet Benjamin S. Grossberg: It’s only in the last few years that I’ve gained enough distance from my teenage self to really understand how deeply I was shaped by the violently homophobic society in which I grew up: 1970s and ‘80s New Jersey.  I suppose those things closest to us can be hardest to see.  So this Broadsided call moved me.  The project—even the salutation “dear”—reminded me that, as I reconsider my past self, I ought to look back with compassion.  That is what made me want to attempt this prompt: the chance to express a little compassion for the years when I didn’t know what I was; I knew only that it was wrong.

What drew you, artistically, to respond to this poem?
Artist Douglas Culhane: The gesture of sending a message back in time to one’s queer and troubled self, without sentimentality. I’m interested in the past, and approaches to examining the past (archeology, paleontology, geology, psychoanalysis). I found the poem’s imagery of descent into the past, described as midden or archive, compelling. I did a few different versions of the image. They always turned out brighter than I had planned. The imagery in the poem relates darkness, accumulation, and secrecy. I think that I was responding more to the fact of the poem, which is an act of clarity and compassion.

Do you often work within the constraints of prompts or exercises?  Why or why not?
Poet Benjamin S. Grossberg: I rarely use prompts.  But sometimes a prompt will correspond to something bubbling under the surface and will become the spout or spigot I need (and have been waiting for).  As soon as I saw the Broadsided call, I knew I wanted to try it.  I wasn’t sure what I wanted to say, but it felt like I wanted to say something.
Artist Douglas Culhane: Not so much. My process is often governed by very specific enthusiasms (i.e. obsessions), but not consciously imposed. I will sometimes make rules for myself, and I know that I’m on the right track when I start breaking them.

Is queerness a subject of your creative work?
Poet Benjamin S. Grossberg: Queerness is in the grain of who I am.  When I write about love, loss, discovery, beauty, whatever, I do so as a gay man—even if that can be felt only between the lines.  But the more I think about it, the more I think it’s a historically embedded queerness.  The definition and textures of queerness evolve year by year, don’t they?  My work smacks of a particular generation of queerness, one shaped by the late 20th century, by AIDS, by an era when marriage was illegal.  I recently had a conversation with a gay man about fifteen years older than I am, and he joked that he felt an obligation to be always “the funny, bitchy, well-dressed queen,” because, he said, that’s what his neighbors expected.  My personal style was influenced by the era of Grunge, so I had to stop myself from bristling: No, gay men don’t have to be like that.  And of course we don’t.  But his comment brought home to me how historically embedded these definitions are.  He’s carrying the banner of his moment, just as I’m carrying the banner of mine.
Artist Douglas Culhane: Implicitly, always; explicitly, sometimes. Queerness means different things to different people, so it’s hard to know what is coming across. I guess the beings that inhabit my work are, at their best, a queer lot—independent, sensitive, secretive, maybe a little broken.

What is something you celebrate about queerness–in yourself or in your culture?
Poet Benjamin S. Grossberg: I love our imagination and inventiveness.  The most vibrant, surprising, original people I know are queer.
Artist Douglas Culhane: Alternate views, divergent strategies, comfort in solitude, maybe just the right amount of alienation. And so many great artists! Marsden Hartley, Robert Rauschenberg, Agnes Martin, David Wojnarowicz, Jack Smith, Chantal Akerman, Peter Hujar. The list goes on.

Do you remember any moment when an unexpected ally reached out to you as a younger queer?
Poet Benjamin S. Grossberg: I had a couple of gay poetry teachers in my mid-20s who were mentors and inspirations.  The folks I’m thinking of—Richard Howard, Mark Doty—mentored many gay writers, really.  Whole generations of us.  The memory of their generosity motivates me to give as much as possible now.  But before that, when I was a teenager, there was nobody.  Well, there was Boy George on television.  This is an example of what I meant above when I talked about finally being able to see the era in which I grew up.  It’s astounding to me: I’m being literal; there was nobody.
Artist Douglas Culhane: A high school English teacher was very kind and encouraging. At that time, queerness was too risky to address directly. When I graduated he gave me a card that wished me “freedom of movement.”

How did you choose the “Vectorization” site for your collaboration (pictured left) and, if anything were possible, where in the world would you most love to discover your broadside posted?
Poet Benjamin S. Grossberg: I took a picture in Auerbach Hall on the University of Hartford campus in West Hartford, Connecticut.  That’s my home turf—a very good place to be who you are.  I suppose if I could discover the broadside anywhere, it would be in the suburban town of Marlboro, New Jersey, where I grew up.  It would be a sign of what surely must be true: that it’s very different there now for young queers.
Artist Douglas Culhane: Not posted exactly, but tucked between the pages of a Marsden Hartley book in a public library where some sensitive middle school student might find it.

Read any good books lately?
Poet Benjamin S. Grossberg: Yes!  A Distance Shore by Caryl Phillips.  Heartbreaking, vivid, and beautifully rendered.  One of those books that humbles me as a writer but compensates by reminding me of how glorious a thing it is to be a reader, how much is available to us page-turning folk.
Artist Douglas Culhane: An Immense World by Ed Yong, a wide-ranging exploration of animal perception and cognition; The Return of the Lion Man (Ulmer Museum), a collection of papers about the sculpture;  Still Life With Two Dead Peacocks and a Girl by Dianne Seuss.

Seen any good art lately?
Poet Benjamin S. Grossberg: For my birthday, I bought a soulful still life from the writer and artist Aaron Caycedo-Kimura.  It’s a small painting—8” x 8”—that brings a window of intimate light to my living room.  Check out his work!
Artist Douglas Culhane: This summer I made a journey to Ulm, Germany, the home of The Lion Man, a paleolithic sculpture depicting a part-lion, part-human creature carved from a mammoth’s tusk. Dated at about 40,000 years BCE, it is possibly the oldest extant work of human imagination, and it is beautiful, uncanny, and profound.

Anything else? (Here, we invite the collaborators to invent a question, add a comment, or otherwise speak to what the questions so far have not tapped about their Broadsided experience).
Poet Benjamin S. Grossberg: It seems most (maybe all) of us spend our lives in an unending, private conversation with ourselves, telling ourselves the story of our lives even as we live that story, debating its meaning even as the narrative plays out.  I love how this Broadsided folio makes part of that conversation available for others, both visually and textually—how this project connects us. 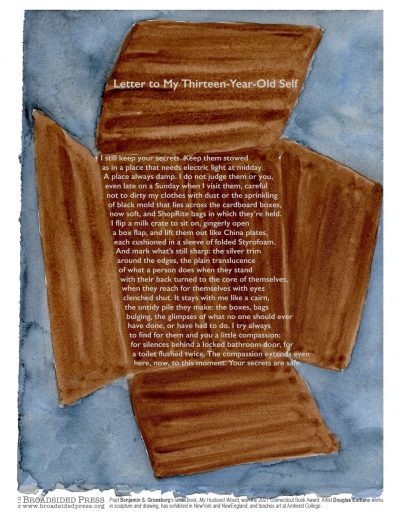 “Letter to My Thirteen-Year-Old Self” (PDF)

NOTE: This broadside is one of three published for our “Dear Queer” special folio created to offer solidarity and hope to, in particular, LGBTIQ+ youth today.  We asked writers to send poems or flash prose  with the title, “Letter to my ______”. The blank could be anything relevant: younger self, former self, future family, unexpected ally, nemesis, dream self, fantasy self, unfurling self, beautiful kid, surprising elder, inner unicorn. Artists then responded. We hope you’ll share this with the queer folks in your life, and with their families–born-to or chosen. YOUR VECTORIZED SELFIE HERE:  PRINT YOUR BROADSIDE, POST IT IN YOUR COMMUNITY, AND SEND US A PHOTO!