What did you think an artist would pick up on from your poem?
Poet Rosalynde Vas Dias: Well, there’s really only one character or dominant image, which is the lighthouse, so I was mostly curious to see how literally the artist would treat the poem.

What inspires you in this poem?
Artist Elizabeth Terhune: I was immediately drawn into the world of the poem.

Did the visual artist refract any element of the poem that made you see the poem differently?
Poet Rosalynde Vas Dias: I realized that there’s a confusion of interiority/exteriority or a kind of lack of boundaries with my lighthouse. The two images of the lighthouse balancing each other at the ends of the broadside really made that leap out at me.

When you began this piece, was it color, shape, or some other aspect that you followed? Did that change?
Artist Elizabeth Terhune: I was probably focused initially on the rock foot and the fire running through cracks—so I think I verged on misinterpreting the poem, or actually did misinterpret it—opting for an almost volcanic scenario. But the poem really is more complex and lovely—there is softness, the whelk, and the ensuing paradox of her polished absence; there is the spiral staircase and cracked walls. So many images involving circle and cracks, emptiness and darkness with light thrown around.

What surprised you when you saw the poem and art together?
Artist Elizabeth Terhune: I was happy that the visual worked to focus on the poem. The broadside has three pillars—image, text, and image again. This mirrors the pulse of a rotating light. I feel my role is to get people to move their eyeballs to the text. To assure them that investing the time to read a poem will be worth it. This poem fits here like something in the mouth.

Have you ever written work that has been inspired by visual art? What was that experience like for you? Why were you inspired to do so?
Poet Rosalynde Vas Dias: I do use visual art from time to time as a jump-starter. Sometimes I write little poems based on Tarot imagery. The first truly ekphrastic poem I ever wrote was in college. I had a very vivacious art history professor whom I quietly adored—I took an ‘Art of the Renaissance’ class with her and one day she was talking to us about an altarpiece by Robert Campin—it is an Annunciation triptych and one of the side panels is of St. Joseph in his workshop building a mousetrap.

The professor mentioned that this was meant to signify Christ as a trap for Satan—I really love the idea of ‘iconography’ generally and I think my imagination was captured by a literal man making a literal mousetrap for literal mice and not really thinking any grandiose thoughts about the Messiah. I wrote a prose poem called “St. Joseph,” really just to focus on Joseph’s humanness and real life distractions pre-baby. That poem was just published this year in The Laurel Review actually, eighteen or nineteen years after it was written.

How does literature fit into your creative life as a visual artist?
Artist Elizabeth Terhune: Oh boy. I can’t begin to answer that. Let’s just say everywhere.

If the Broadsided collaboration were a piece of music, what would it be?
Poet Rosalynde Vas Dias: There’s a really fabulous audio production by Annie McEwen I just heard this year about the foghorn. It’s called ‘Here I Am and Here There Be Danger’—you can listen to it on PRX. I heard it just a few months ago and was so jealous. It isn’t music—it’s creative radio. It might be a good companion piece for this broadside, though it is more about actual heartbreak than “Lighthouse” is.
Artist Elizabeth Terhune: Dido’s Lament (linked to YouTube performance). From Purcell’s Dido and Aeneas. (It gets amazing at 1.24 sec in.)

Read any good books lately?
Poet Rosalynde Vas Dias: I’m slowly reading a biography of Stephen Sondheim—I guess, come to think of it, that his musical Sunday in the Park with George is highly ekphrastic, among other things—and I’ve been reading some fairy tales & some issues of The Fairy Tale Review for this course proposal I want to write.
Artist Elizabeth Terhune: Edith Wharton’s Ghost Stories. Tolstoy’s Anna Karenina (Pevear and Volokhonsky). Mouse by Georgie Carroll.

Seen any good art lately?
Poet Rosalynde Vas Dias: I live next to The Steel Yard in Providence—a non-profit that holds classes on metal working—casting, welding—and ceramics and does on-site fabricating as well. There was a sculpture there by a successful sculptor here in town and it was getting ready to be packed up and shipped to its permanent home—for a day or two, it was standing up and then it was put on its side and stabilized with wooden framing so it could travel and I’d see it reclining in the dark when I’d take my dog out. It feels very private and special to see art like that—the way it isn’t really going to be seen in the future or isn’t meant to be seen.
Artist Elizabeth Terhune: Jacob Lawrence’s Migration Series. Masterpiece of the 20th century.

Anything else?
Artist Elizabeth Terhune: Just a big thank you to Rosalynde Vas Dias (hope Providence is treating you well) and to Elizabeth and everyone at Broadsided Press. 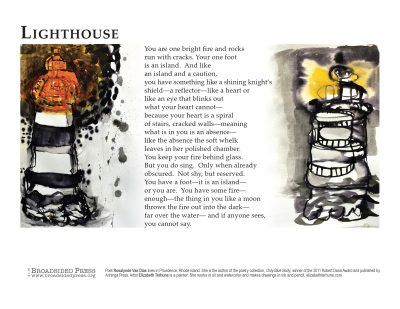 Poet Rosalynde Vas Dias earned an MFA in Poetry from Warren Wilson College’s Low Residency Program for Writers. Her first book, Only Blue Body, was winner of the 2011 Robert Dana Award offered by Anhinga Press. Her poems have appeared in Crazyhorse, The Cincinnati Review, West Branch, The Pinch, Laurel Review, and elsewhere. She lives in Providence, Rhode Island.

Artist Elizabeth Terhune has exhibited widely throughout the United States. You can view some of her work online at www.elizabethterhune.com, and selected works in the Pierogi Gallery Flat Files, Brooklyn, NY, as well as through the Drawing Center’s Online Viewing Program Artist Registry. She teaches painting and drawing at the 92nd Street Y and at NYU’s School of Continuing and Professional Studies in New York City.