What did you think an artist would pick up on from your poem?
Poet Aaron Ansett: I’d suspected that the brief catalog “flamingos and volcanoes, avalanches/and lovers’ trembling breaths” might be reflected in the art.

What inspires you in this poem?
Artist Ira Joel Haber: I liked the location of the poem and what it brought back to me from my childhood. I remember seedy bars especially the ones that were under the elevated trains in Brooklyn where I grew up. I actually did an oil painting when I was a teenager of a bar under the el, which I played around with for the poem, but guess it didn’t go over with the designers, even though I liked it, and thought it would maybe work well with the poem.

Did the visual artist refract any element of the poem that made you see the poem differently?
Poet Aaron Ansett: The poem’s shape echoed in the six squares at the top of the image, which also invoke various items from the poem—glass brick windows, bar TVs, calendars—made me see how much subconscious resonance is at play.

When you began this piece, was it color, shape, or some other aspect that you followed? Did that change?
Artist Ira Joel Haber: This began life as an old drawing that I did and I added things and took away things from it. I did many versions, playing with textures and colors. I spent many hours working on the pieces, and am glad I did, because a few weeks ago I had a heart attack and if I didn’t have the pieces done and ready I don’t know what I would have done. I’m healing and on the mend now and glad that I made the deadline.

What surprised you about this collaborative piece?
Poet Aaron Ansett: The color scheme, which I’ve grown to like very much.
Artist Ira Joel Haber: I have to say in all honesty that I didn’t really like it when I first saw it, it took me aback, all that empty space on the right side, but it slowly grew on me. I will be honest, but this is not one of my favorite broadsides that I’ve done.

Have you ever written work that has been inspired by visual art? What was that experience like for you? Why were you inspired to do so?
Poet Aaron Ansett: Among my earliest work that I’ve not entirely disavowed are poems about Munch’s The Scream and Rothko’s Orange and Yellow. More recently, I was part of a round-robin ekphrastic experiment in which six visual artists and six poets responded to each other’s work over many months.

How does literature fit into your creative life as a visual artist?
Artist Ira Joel Haber: I know so many writers, poets, critics, and novelists but I don’t think I’ve been influenced by literature in terms of my own art. I’ve been more influenced by film, but I’ve always loved books and at one time I wanted to be a graphic designer and do book covers. I still have many that I did as a teenager and an art student.

If the Broadsided collaboration were a piece of music, what would it be?.
Poet Aaron Ansett: Anything on a good dive bar jukebox: “(We’re Not) The Jet Set,” Tammy Wynette and George Jones, “Walkin’ After Midnight,” Patsy Cline, “Pusherman,” Curtis Mayfield, “One Piece at a Time,” Johnny Cash.
Artist Ira Joel Haber: Late at night jazz in a smoke-filled bar.

Read any good books lately?
Poet Aaron Ansett: Ronald Johnson’s gorgeous The Book of the Green Man, Maggie Nelson’s whip-smart The Argonauts, Paul Beatty’s hilarious The Sellout, Matt Schumacher’s gorgeous, whip-smart, and hilarious favorite maritime drinking songs of the miraculous alcoholics.
Artist Ira Joel Haber: The last book that I read through was The Goldfinch by Donna Tart- I’ve been having trouble finishing books of late; I easily put them down and don’t finish them, but the Tartt book held me to the end.

Seen any good art lately?
Poet Aaron Ansett: Last year I many times visited the Denver Art Museum to see Daniel Sprick’s “Fictions” exhibit, which combined photo-realistic portraiture with painterly abstraction. The work is stunning and haunting: http://bit.ly/1gC6SjL.
Artist Ira Joel Haber: I was invited to a private viewing for artists in the collection at the new Whitney Museum and there was so much great work shown, much of which I grew up seeing and much that I haven’t seen before. The museum itself is quite spectacular with superb views of lower Manhattan. I also got up to the Museum of Modern Art to see the Yoko Ono show which was better than I was expecting. 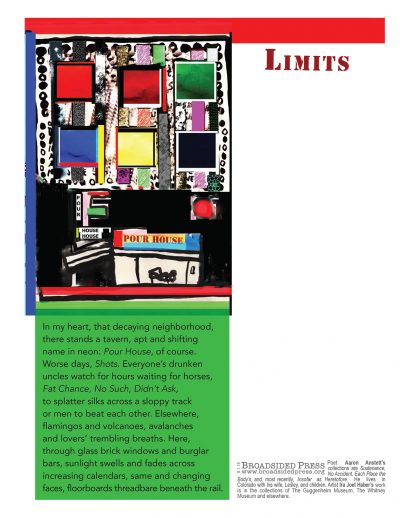 Poet Aaron Anstett is the author of the collections Sustenance, No Accident, Each Place the Body’s, and Insofar as Heretofore. Among other awards, he has received the Balcones Poetry Prize and the Nebraska Book Award. Anstett served as the inaugural Pikes Peak Poet Laureate, instituting a continuing program that places pamphlets of poems by local writers in waiting areas. He lives in Colorado with his wife, Lesley, and children.

Artist Ira Joel Haber was born and lives in Brooklyn New York. His work has been seen in numerous group shows both in USA and Europe. His work is in the collections of New York University, The Guggenheim Museum, The Whitney Museum, The Hirshhorn Museum & The Albright-Knox Art Gallery. Currently he teaches art at the United Federation of Teachers Retiree Program in Brooklyn. (View Ira’s Work)