What did you think an artist would pick up on from your poem?
Poet George David Clark: I actually suspected color might play an important role. In an early draft of the book manuscript this poem is drawn from, the major sections cohered around a color scheme. Since the poem mines disparate images, I think it would be easy for a literal translation of any one of them to seem lopsided, unbalanced. That’s not the case here at all.

What inspires you in this poem?
Artist Meghan Keane: I am inspired by the tremendous variety of match-related imagery and what I, no literary critic but fan, consider great ingenuity with respect to the word choices creating these images. It is a poem that requires multiple readings, exhorts them, and I discover new meanings, images, and nuances with each reading. I am still teasing out the significance of the religious word choices.

Did the visual artist refract any element of the poem that made you see the poem differently?
Poet George David Clark: The image got me thinking about the tension between colors and shapes in the poem, how the angles of the matchbox play off the cursive signature in soot, how the red of the lit match meets the blown light bulb.

When you began this piece, was it color, shape, or some other aspect that you followed? Did that change?
Artist Meghan Keane: I was interested in the first line of the poem. The color red and the number two were my starting points, since I decided that it takes two to argue…. I was surprised to discover my final gesture was a somewhat violent one (arguing perhaps?) when I punched holes and lastly sewed with needle and thread into the paper, creating the two dark black lines. I have actually left the needle on the thread; it is hiding behind the work. During the process my starting elements remained prominent.

It was curious to observe myself while making the piece, watching as I began to gravitate towards mixed media more than ever before—using acrylic, pen, watercolor, and ultimately hole punching, needle, and string. For me, art making is a type of visual poetry, creating a self contained universe out of disparate parts, fusing all elements into one complete whole. It was exciting to use that variety of media yet to feel like the work is complete. Perhaps the variety in and unity of this artwork is the thing I was unconsciously striving for, as (retrospectively) it seems to be the proper visual expression of the tension between the variety and unity contained in this great poem.

What surprised you about this collaborative piece?
Poet George David Clark: I think the thing that surprised me most is just how successful the image is in its manipulation of those contrasts: color, shape, texture. It makes me think of a poem like Gary Soto’s “Oranges” where the final stanza poses the fire of the orange against the brown of the chocolate bar and the gray of the December sky. In the context of those other colors the orange seems somehow more orange, fierier, in the mind’s eye. I would love to pull off an equivalent feat in my poems. I say I am surprised to see it in Meghan Keane’s image simply because I know how difficult those combinations are to negotiate. I’m envious.

Have you ever written work that has been inspired by visual art? What was that experience like for you? Why were you inspired to do so?
Poet George David Clark: A great deal of what I write is inspired by visual art in the larger sense of that term, but the correspondence isn’t often one-to-one. I’ve never written a successful poem “after” a work of visual art, an ekphrastic poem. But then again I don’t know that I’ve ever written a successful piece in direct response to another poem either. My tendency is to borrow from multiple sources, and as a draft-poem matures I often move away from its triggers. That said, for a couple years now I’ve been working on a long poem interested in haute couture dressmaking. That poem wasn’t necessarily inspired by a specific gown, but it does reference individual dresses and their image continues to renew the energy in the verse.

If you had to represent the Broadsided of “Matches” with one word, what would it be?
Poet George David Clark: How about “lambent.”
Artist Meghan Keane: Complex

If “Matches” were a geologic formation, what would it be?
Poet George David Clark: I’d like for it to be one of those gypsum chandeliers in the caves at Lechuguilla.
Artist Meghan Keane: Tierra del Fuego. Principally for the name, secondarily for the fault line it sits upon.

Read any good books lately?
Poet George David Clark: Well, I just finished Pinsky’s translation of The Inferno,and it’s hard to top Dante. Other recent favorites though: Eduardo Corral’s Slow Lightning, Rebecca Lindenberg’s Love, An Index, and Christian Wiman’s Mandelstam: Stolen Air. The one book I’m most anxiously awaiting is Lisa Russ Spaar’s Vanities Rough (due out from Persea this fall).
Artist Meghan Keane: Not lately. I have been making a lot of etchings instead of reading. I look forward to reading in Spanish starting next week when I embark on an art retreat to Ecuador.

Seen any good art lately?
Poet George David Clark: The piece I’m stuck on right now is an embossed steel helmet in the MET’s “Arms and Armor” permanent collection. The helmet was formed from a single piece of steel (damascened with gold) in the sixteenth century by the metalworker, Filippo Negroli. It’s most prominent feature is an outstretched mermaid in relief along the helmet’s comb, but the entire surface is intricately and beautifully detailed. Gallery 374, if you’re in New York.
Artist Meghan Keane: I have enjoyed the work at Kentler International Drawing Space, a gallery I teach at that shows works on paper. Through the Kentler, I recently discovered the artist Richard Howe, and think that everyone should know about and enjoy his work. I would consider his drawings to be sound drawings, because I look at them and can imagine what they sound like. They prompt a real synesthesia experience in the viewer. Howe, whose past has rich musical connections, very successfully conveys his unique musical sensibility through his use of texture, delicate or heavy mark making, spatial tensions, rhythmic qualities.. etc. I secretly, or not so secretly now, wish I could draw more like this. I simply love the work. Richard Howe’s website

Anything else?
Artist Meghan Keane: Thank you for another great Broadside! It was a pleasure and honor to be inspired by George David Clark’s poem. 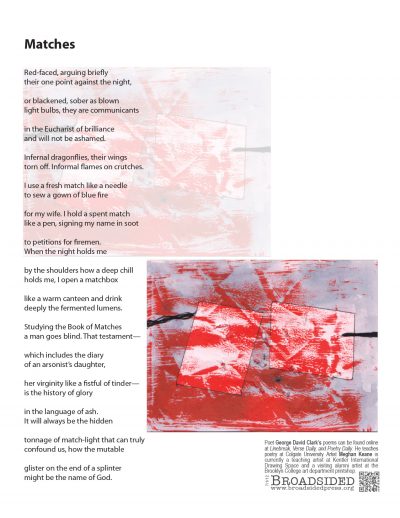 Poet George David Clark’s honors include the Henry Hoyns Fellowship from the University of Virginia and the Provost’s Doctoral Fellowship from Texas Tech University. His poems have appeared most recently in Copper Nickel, The Journal, River Styx, and Southern Poetry Review, and can be found reprinted online at Verse Daily and Poetry Daily. He teaches poetry as the Olive B. O’Connor Fellow at Colgate University and serves as the editor of 32 Poems.

Artist Meghan Keane exhibits nationally and internationally and her works can be found in private collections throughout the United States, Latin America, Europe and Japan. Recent projects include a solo exhibition, “PROJECT NIHON / sustainable art travel,” in Tokyo; a group exhibition, “Casa de Munecas” in Quito, Ecuador and “do it yourself candide,” which Keane was invited to create for the New York Public Library (january 2010). Keane is the founding director of meghan.keane.studio (meghankeanestudio.com). She is also currently a teaching artist at Kentler International Drawing Space and a visiting alumni artist at the Brooklyn College art department printshop.