What inspired you to “dibs” this poem?
Artist Helen Beckman Kaplan: It dealt with nature and love.

Did the visual artist refract any element of the poem that made you see the poem differently?
Poet Roy Seeger: I think “refract” is an appropriate word to describe Helen Kaplan’s work here; it captures one instant of the mayfly’s iridescent wings, as if in amber. The collaboration better captures the moment before a physical act (whatever that may be) a moment of stasis, full of potential energy—even the physical poem hovers over the wings, a thing suspended mid-air as if by the humidity. What this teaches me about my poem is that the theme of stasis is deeper than I imagined.

In what sense did the poem first present itself as a collaboration with a visual medium? Did it come to you first as image? As an idea? Music? Narrative?
Artist Helen Beckman Kaplan: I think that just about any descriptive narrative results in a very specific image for me in the same way that places in a dream have a specific sense of layout and detail. So I thought about trying to express that, in a line or tone drawing, but I was ultimately drawn to the idea of the delicacy of mayfly wings. I thought of trying to use the words in the poem to form the lines of the tracery of the wing, but then after fooling around with that for while I started using an accumulation of small marks to make the lines, and then tried various ways of dissolving those lines in a way that was reminiscent of the way mayflies swarm. I wanted to use color, but I wanted to use it in a way that would also function well as a strong contrast, so I used complementary colors that could visually blend to a dark gray.

If your poem were a type of bird, what would it be?
Poet Roy Seeger: This poem would not so much be a species of bird, but any bird taxidermied to simulate a moment of flight.

If you art were a bird, what would it be?
Artist Helen Beckman Kaplan: A robin?

If the broadside collaboration were a type of bird, what would it be?
Poet Roy Seeger: A short-billed dowitcher (for obvious reasons).
Artist Helen Beckman Kaplan: Two robins?

What did you think an artist would pick up on from your poem?
Poet Roy Seeger: Initially, I imagined the artist would focus more on the objects that represent human remnants of the relationship. I always imagined the wings of the mayfly, in my poem, as just another detail of landscape, another byproduct of this relationship, perhaps a consequence of it. The amazing thing with Helen Kaplan’s interpretation is that the mayfly’s wing becomes the landscape which is created through the relationships between the fragments of shape and color. I guess the title should have suggested my awareness of that particular image’s importance to the poem, but it really didn’t without the artwork.

What surprised you about this collaborative piece?
Poet Roy Seeger: I guess I expected the artwork to be illustrative rather than conceptual. For some reason I got the image of a wooden deck chair and the glass of sweet tea. Also, I always imagined my poem’s stanza going straight down the page. The differences made me rethink my interpretation of the poem. Or more specifically it gave me another interpretation of this poem. Thank you.
Artist Helen Beckman Kaplan: That it gave me a certain amount of freedom to step away from the expectations I usually have in my studio. Because it was created as a response to the poem and designed to accompany text, I felt somewhat removed from my usual identity, and that was fun and liberating.

When you begin a piece of visual work (or, if that’s too broad, when you began this piece), is it color, shape, or some other aspect that you follow?
Artist Helen Beckman Kaplan: This piece is pretty different in approach from anything image I create normally. Usually I start with abstractions that are generated by looking at something—a photo or another painting, either my own or in a book, often turned upside-down—and pulling out negative shapes. My lines, marks and washes usually have a much looser and immediate feeling to them than this piece. But this occasion seemed to call for something different.

Have you ever written work that has been inspired by visual art? What was that experience like for you? Why were you inspired to do so?
Poet Roy Seeger: I’ve never written about a specific piece of Art, but I have often written poems after being energized by an art fair, a trip to a museum, an art gallery show, and so on. I have, however, written poems about television shows and movies, which are always the most difficult things for me to write. I always find the challenge with these poems for me, and readers, is to take the subject matter seriously, perhaps reverently. This seems expected when writing about “serious Art.” With popular culture themes, however, I have the advantage that the general population doesn’t already take the subject seriously as Art; it seems easier to usurp peoples’ expectations when the subject matter is generally considered mere entertainment. I havewritten a poem about the movie “Taxi Driver.” Does that count as Art?

If you had to represent your response to “Mayflies” in one word, what would it be?
Artist Helen Beckman Kaplan: Form

Seen any good art lately?
Poet Roy Seeger: I have finished reading the graphic novel Pride of Baghdad—fantastic illustrations. I also love half of the random sculptures scattered throughout Kalamazoo and Western Michigan University. Alas, I have been to no gallery shows lately.
Artist Helen Beckman Kaplan: Poussin’s Arcadian paintings.

Anything else?
Poet Roy Seeger: Have you folks ever discussed printing anthologies? Maybe a nice calendar?
Artist Helen Beckman Kaplan: I’ve never seen a badger. Would like to. 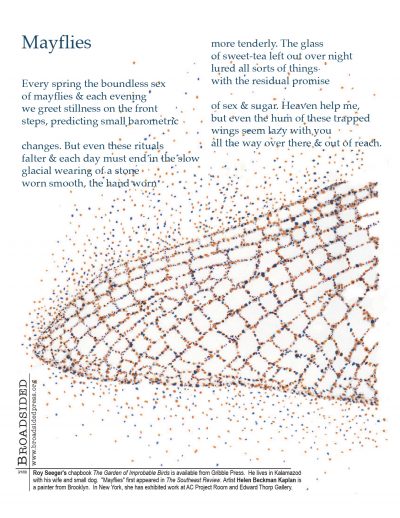 Poet Roy Seeger recieved his MA in poetry from Ohio University and his MFA (also in poetry) from Western Michigan University where he teaches part-time. His poems have appeared in, or are forthcoming from, The Laurel Review, Cream City Review, Hotel Amerika, Verse, The Southeast Review, Green Mountain Review, Gulf Coast, Mississippi Review as well as other journals. His work has also been featured on Verse Daily, and was the winner of the first Buckbee, A Writer Inc. “Sadness Writing Contest.” His chapbook The Garden of Improbable Birds is available from Gribble Press. He lives in Kalamazoo with his wife and small dog. “Mayflies” was first published in The Southeast Review.

Artist Helen Beckman Kaplan is a painter from Brooklyn who was educated at Rhode Island School of Design, Tyler School of Art, Indiana University and Skowhegan School of Painting and Sculpture. She has been a resident at Yaddo and Millay Colony, and has exhibited her work in New York at AC Project Room and Edward Thorp Gallery.