What did you think an artist would pick up on from your poem?
Poet Nathan McClain: First, shout-out to Sam Vernon for seeing what she saw in this poem; honestly, I wasn’t sure what an artist would understand or pick up on from the poem — never thought an artist would engage with one of my poems — it’s amazing! If anything, however, I would hope (and I think Sam discovered this) an artist would focus on tone and tonal shifts within the poem. I would hope the loneliness of the speaker, as well as his sadness or disappointment, was evident and communicated. Based on what has been evoked, particularly in terms of the portrait’s color and how that affected its mood, I think Vernon understood that.

What inspires you in this poem? What drew you to it?
Artist Sam Vernon:

Did the visual artist refract any element of the poem that made you see the poem differently?
Poet Nathan McClain: Not necessarily, no. I think the elements of the portrait-the hazy or blurred features of the figure, against the bright backdrop which looks like a series of fractured coins-were more highlighted or exacerbated with my knowledge of the poem. It is interesting, though, to engage a visual representation of the language presented.

When you began this piece, was it color, shape, or some other aspect that you followed? Did that change?
Artist Sam Vernon: Shape, line, and shadow. How gray memory can be…

What surprised or struck you once you saw the finished broadside?
Poet Nathan McClain: Maybe that the figure was so close in the portrait? In proximity, that is. I don’t why, but when I picture the figures in the poem, I see them more distantly, almost similar to Hopper’s Nighthawks. You know, solitude, yet a nearness, an almost touch. My mind’s eye is a bit farther back, so it was striking to receive the intensity of this figure in the foreground. And who is this figure? Is it the speaker? The father? The bartender? Is it all of them and none of them? I found that fascinating. I enjoyed the contrast of the font color against the portraiture; that color was also surprising, pleasantly surprising.

Have you ever written work that has been inspired by visual art? What was that experience like for you? Why were you inspired to do so?
Poet Nathan McClain: I have written quite a few ekphrastic poems in fact, many of which appear in my first collection, Scale. My speakers more so inhabit the pieces rather than comment on or engage with them from without; it’s an interesting perspective to visualize. Each painting informs the speaker’s narrative in a particular way that I find intriguing, and I believe each asks for a different kind of engagement with the poem’s (and portrait’s) materials. Largely, I think I’m inspired when a piece of art seems to speak to my own personal narrative, so I’m interested in exploring it in writing. That’s typically been the case for me.

How does literature fit into your creative life as a visual artist?
Artist Sam Vernon: Literature is foundational to my practice.

If this broadside were a piece of music, what would it be?
Poet Nathan McClain: Maybe “Radio Silence,” by James Blake? Possibly too on the nose, hahaha? I should probably choose something more classical, shouldn’t I?
Artist Sam Vernon: “No One Needs to Know” by The Changes.

Read any good books lately?
Poet Nathan McClain: Geez, good books?? Don’t get me started. Far too many to list. I’ve recently finished Jesus Said, a chapbook by Patrick Donnelly; Four-Legged Girl, by Diane Seuss; and Stitches, by David Small, all of which were quite wonderful. Simulacra, by Airea D. Matthews is brilliant. But I have so much reading to do. On my immediate list? Henry Kissinger, Mon Amour, by Conor Bracken; Rocket Fantastic, by Gabrielle Calvocoressi; and Crush, by Richard Siken (surprisingly, I’ve never read it). But I have so much reading to do! My poor bookshelves.
Artist Sam Vernon: Between the World and Me by Ta-Nehisi Coates.

Seen any good art lately?
Poet Nathan McClain: To be honest, I don’t get to museums nearly as often as I should, because I tend to work so much, but while in Detroit recently, a dear friend and I spent some time at the Detroit Institute of Art and viewed their “Art of Rebellion: Black Art of the Civil Rights Movement.” There were a number of provocative pieces, though the exhibit itself was rather small and limited. The Diego Rivera murals were quite stunning. I have plenty to mull over when I’m back in Brooklyn.
Artist Sam Vernon:  Works by Belkis Ayón at El Museo del Barrio.

Anything else?
Poet Nathan McClain: What more is there to say? Hmmm. I’m grateful to Elizabeth and the Broadsided editorial team for featuring this poem/art collaboration. Visual art is often a source of creative input and inspiration for me, so to be part of this type of project is particularly humbling. I hope viewers will see, will experience, this collaborative work as such. 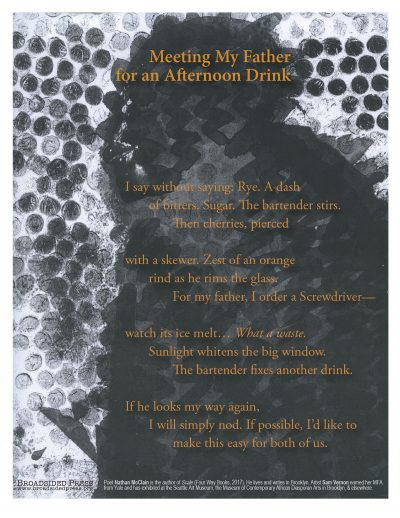 “Meeting My Father for an Afternoon Drink” (PDF)

Poet Nathan McClain is the author of Scale (Four Way Books, 2017), a recipient of scholarships from The Frost Place and the Bread Loaf Writers’ Conference, and a graduate of Warren Wilson’s MFA Program for Writers. His poems have recently appeared or are forthcoming in Callaloo, Ploughshares, Sou’wester, Hunger Mountain, Tinderbox, and Southern Humanities Review. He lives in Brooklyn.

Artist Sam Vernon earned her MFA in Painting/Printmaking from Yale University in 2015 and her BFA from The Cooper Union for the Advancement of Science and Art in 2009. Her installations combine xeroxed drawings, photographs, paintings, and sculptural components in an exploration of personal narrative and identity. She uses installation and performance to honor the past while revising historical memory. Vernon has most recently exhibited with We Buy Gold, Interstitial Gallery, Coney Art Walls curated by Jeffrey Deitch, Brooklyn Museum, Queens Museum, Fowler Museum at UCLA, and Seattle Art Museum. Sam lives in Oakland, CA and teaches printmaking as an Assistant Professor at California College of the Arts (CCA). www.samvernon.com