What did you think an artist would pick up on from your poem?
Poet Miller Oberman: Well, the poem is much more visually striking, in terms of its form on the page, than my work usually is, and so I thought a visual artist would probably be interested in that. I think form and function in poetry should always go together, and it’s something I strive for, but it doesn’t always come through as clearly as it does here.

What inspires you in this poem? When you began this piece, was it color, shape, or some other aspect that you followed? Did that change?
Artist Bailey Bob Bailey: My initial response was the shape of the poem. I have a love/hate relationship with concrete poetry, I’m sure it’s the sculptor in me but the poem visually pops on every line and my piece echoes that stratification.

The shape was primarily based on material I had had for some time. Color followed. The idea was to make 2 dimensional lines and bend then into 3D space.

Did the visual artist refract any element of the poem that made you see the poem differently?
Poet Miller Oberman: Yes! I definitely saw the poem as having an intense driving-downward motion, but I think the way Bob represented it made me more aware of an upward driving motion as well. I love the way he incorporated what I see as bent planks as a canvas. The poem has a real rigidity to its images, but I think is also about struggling with that rigidity.

What surprised you about this collaborative piece?
Artist Bailey Bob Bailey: I love how the shapes settle into a charged and asymmetrical convergence. I actually called the sculpture, TO THE POINT.
Poet Miller Oberman: The more I look at the collaboration the more the two pieces, made into one, make me think differently about both. It’s very cool—there’s a sort of looping effect, where they keep speaking to and about each other. Bob’s piece reminds me of a flag, with the bold colors and shapes, and the poem is so angry, to me, while maintaining (I hope) a dark sense of humor about its mood. The collaboration has me thinking of the ways in which poems or moods can be like nations, and I suppose in that regard I’m surprised by how this piece has changed for me over time, particularly in this post-election landscape we’re all currently living in, and which we don’t and can’t know the true extent of yet. I hope the piece keeps reminding me that moods and flags and poems and nations can be eminently flexible. I started this poem on a cold winter day when I was trying not to admit how angry I was, and then trying to find a way to express rage in a way that felt acceptable to me. I’m surprised at what a difficult time so many people have, myself included, trying to express anger in ways that are productive.

How does literature fit into your creative life as a visual artist?
Artist Bailey Bob Bailey: Literature and poetry is always with me, like most art I’m fascinated by its construction.

Have you ever written work that has been inspired by visual art?
Poet Miller Oberman: Well, I’ve been working a lot on translating Old English fragments, and often the experience of that is a visual one—how to represent visual damage in language.

What was that experience like for you? Why were you inspired to do so?
Poet Miller Oberman: Frustrating. I’m often inspired by artistic frustration, or just regular human frustration. In some ways I was inspired to do so by Jack Halberstam’s amazing work on what he calls The Queer Art of Failure. Seeing failure or frustration as an invitation, and as beautiful and meaningful in itself is really useful to me as a poet.

Describe the collaboration in one word.
Poet Miller Oberman: Ok, but I have to use a compound word: garsecg. This Old English compound is composed of the words for “spear” and “edge,” and together they mean the person who wields a spear. Except in poetry it’s used to mean the sea. I love the way the spear itself and its edge become the word for the person who wields it, and I have no idea why it came to stand in for the sea. Possibly something about the sharpness of salt, or how the sea can look metallic. In any case, the collaboration, I think, is something cutting, but also something moving, like the spear and the sea.
Artist Bailey Bob Bailey: Blade

If the Broadsided collaboration were a piece of music, what would it be?
Poet Miller Oberman: R.E.M “Ignoreland”
Artist Bailey Bob Bailey: Hard to say… been listening to Planet Waves lately.

Seen any good art lately?
Poet Miller Oberman: No, but I really need to. Someone come show me some good art!
Artist Bailey Bob Bailey: I’m totally locked into Ron Gorchov at the moment. I want to live with one of his paintings and wrap myself in its visceral concavity. 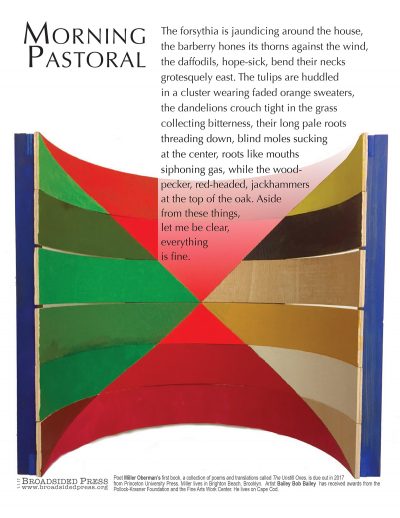 Miller Oberman’s first book, a collection of poems and translations called The Unstill Ones, is due out in 2017 from Princeton University Press. Miller lives in Brighton Beach, Brooklyn.

Bailey Bob Bailey studied sculpture at Virginia Commonwealth University, He recently had a survey exhibition at the Provincetown Art Association and Museum titled CAVE ORE BRIDGE. Bailey is reprecented by Ethan Cohan Gallery in NYC and Beacon,NY, and at The Schoolhouse Gallery in Provincetown, MA. He lives year round in Truro, MA.