What made you think of Broadsided for this poem?
Poet Matthew Thorburn: I was lucky to have my poem “The Other Side” broadsided back in 2017, so I knew what an exciting experience this collaboration would be. The new book I’m working on now includes a number of brief, image-focused poems like this one, so when I started sending those poems out to journals and other places, I naturally thought of Broadsided.

What inspires you in this poem? What drew you to it?
Artist Meghan Keane: I have a tendency to be drawn to poems that resonate a deep emotion, rather than, say, a lighthearted one. Matthew Thorburn’s poem struck me as powerful and saturated with truth on a few levels. War is always both political and personal. In my own life, I have family members (now ancestors) who experienced running away from a place because the state turned distinctly hostile toward their ethnic group, forcing them to leave their house, town, friends, and other family members behind. Most of the buildings in my grandfather’s village are no longer there due to state violence, and it still doesn’t feel safe to go back and visit because I regularly criticize that state publicly on social media. As such, I was drawn to the poem in part on this particular personal level of resonance.

On another level, I have been active with Syria Solidarity NYC for almost four years now, listening to and learning about what friends inside Syria have faced and continue to face at the hands of hereditary dictator Bashar Al Assad; I support those who call for justice, Assad’s removal from power, and that all people have the right to be free from all forms of state violence. I see my friends in this poem; war and forced displacement are their reality and returning home might not be safe in their lifetimes (may that not be the case; and, it is currently uncertain). This poem’s description of a truth that millions of people continue to endure resonated as urgently important.

Through other projects I am involved in (www.emergenthorizons.org), I have also spoken with individuals in Colombia who, due to the decades-long Colombian civil war, very much lived and are living through flavors of the experience this poem captures—of going home to no home, just to maybe a number on the door, or the carcass of the building that once held you, or to the place that was your land but now another family has moved in and made it home. The poem quietly expresses the heartwrenching grief of it all. And it is clearer than ever: so much of state harm is tied to the stranglehold of racialized capitalist patriarchal white supremacy and colonial settler systems. I mention war in terms of global geography above but I would be remiss if I didn’t explicitly state that Black Lives Matter and that we white people have genocide, eviction, and state violence done in our name daily here that we must confront and do the active justice work of anti-racism to repair and transform.

Returning to a house but facing the loss of home in Matthew Thorburn’s poem sticks in my stomach. I feel weird to say “inspired me” but it is that loss of safe home that I kept seeing as I began imagining something a bit outside of my usual visual language: a mixed media collage.

I fired up ancient hard drives to excavate photos I took during travel to another place that lived through the dehumanizing violence of war: Bosnia and Herzegovina. Matthew’s poem inspired me to reflect on and pull images from a trip that involved casually encountering the artillery-pockmarked remains of buildings–buildings that continue to dot the landscape years after war has ended.

My superimposed drawing was inspired by the title, giving both a literal mother image to connect to and imagining the embodied, physical experience of pain that stems from not only loss of place, but the compounded loss of not finding the mother’s teapot–an object that represents a family’s hope for the ability to return one day to a different, “normal,” violence-free future.

Describe your dream “Vectorization”—where, in your wildest dreams, would you most like to see this broadside posted in the world today?
Artist Meghan Keane: Wallpapering the front doors of the homes of tyrannical men responsible for crimes against humanity. Followed by them being held accountable for their harm.
Poet Matthew Thorburn: On the front of the podium in the United Nations’ assembly hall.

What did you think an artist would pick up on from your poem? Did the visual artist refract any element of the poem that made you see the poem differently?
Poet Matthew Thorburn: I think Meghan’s visual refraction captures the poem perfectly—and was a wonderful surprise to me. I had supposed an artist would naturally include a teapot. But just as in the poem, in Meghan’s work the teapot is only there in memory and imagination. Meghan’s refraction helps me to see the mother—a character who’s at the center of the book-length sequence that includes this poem, but whom I had never really been able to picture before.

Did responding to this poem shift anything in you as an artist?
Artist Meghan Keane: Responding to Matthew’s poem, and even reflecting on these questions here, has helped connect the dots in me as an artist regarding how my political self and my expressive self are interwoven. This mixed media response is definitely one of the most explicit illustrations of merging a moral stance (which is inherently political) with a visual artwork.

Have you ever written work that has been inspired by visual art? What was that experience like for you? Why were you inspired to do so?
Poet Matthew Thorburn: Oh yes, I’m often inspired to write by visual art. Spending time looking at paintings and other visual art is a go-to writing prompt for me, especially when I’m fishing around for some new thought or feeling to start a new poem. The book-length sequence that “Mother’s Silver Teapot” comes from includes a poem inspired by a painting by Gerhard Richter as well as poems prompted by a painting and a sculpture by Picasso.

There is Arabic text in the image you made — what does it say?
Artist Meghan Keane: I reached out to a friend from Idlib, Syria and asked what would be a meaningful text to let people know we stand with them in their demand for the right to live and I added what she sent as a visual design element.

If this broadside were a type of weather, what would it be?
Artist Meghan Keane: Some sort of mix of the weight of a very heavy London fog with a heart-piercing sustained lighting strike seen at a distance in, say, New Mexico.
Poet Matthew Thorburn: That cool breezy time just before the sky goes dark and rain pours down.

Seen any good art lately?
Artist Meghan Keane: I’d like to uplift the outstanding artwork being amplified on the Instagram account @LoveWavelength and encourage anyone with financial abundance to support those artists by purchasing prints or originals.
Poet Matthew Thorburn: Instagram has been a good way to stay in contact with friends during these past few months, as well as a way to see art and interesting images from other places and perspectives. I love looking at the miniature versions of classic jazz album sleeves that Ako Nakagawa (@helloimako) has been making out of colorful cut paper, for instance, and painter Hans van der Leeuw’s (@hansvanderleeuw) intriguing portraits.

Anything else? (Here, we invite the collaborators to invent a question, add a comment, or otherwise speak to what the questions so far have not tapped about their Broadsided experience).
Artist Meghan Keane: My gratitude to poet Matthew Thorburn for his deeply moving, challenging, and inspiring poem; and thank you to Broadsided for the ongoing opportunity to collaborate in such meaningful ways.
Poet Matthew Thorburn: It’s such a unique gift to get to see my poem through an artist’s eyes. Thank you so much for this. 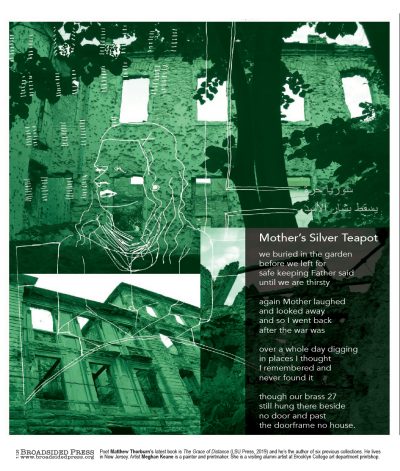 Poet Matthew Thorburn’s latest book is The Grace of Distance (LSU Press, 2019).  He’s also the author of six previous collections of poems, including Dear Almost (LSU Press, 2016), winner of the Lascaux Prize, and the chapbook A Green River in Spring (Autumn House, 2015). He lives with his wife and son in New Jersey.

Artist Meghan Keane is a painter and printmaker. She is the founding director of meghan.keane.studio and a visiting alumni artist at the Brooklyn College art department printshop. She lives and works in Brooklyn, NY.