What is behind your choice of this piece of art in response to Claire’s poem?
Artist Theodore C. Van Alst, Jr.: This work made me think of the helicopter and plane that circled us, made me think back to what that being watched must have been like for the ancestors, and what has always been the fear that the settlers and their armies had then, have now, and cannot or will not lose.

What led you to this poem about the Actions at Standing Rock?
Poet Claire Hermann: In the short time I spent at Sacred Stone Camp, I was struck by two unexpected experiences. The first was the strangeness of being in such a beautiful natural setting while having spotlights on us all night, drowning out the stars and making it possible to walk around camp without a flashlight, and hearing the constant noise of airplanes, helicopters and drones. The second was the constant, powerful grounding of the daily life of the camp in prayer and ceremony.

What do you think is the role of art in regards to real-world, real-time events? In other words, what makes a “successful” occasional or political piece of writing or art?
Poet Claire Hermann: I try, as an activist and a writer, to be useful. Poetry, like chants and banners and other kinds of art, can be useful to movements for justice by connecting people to the emotional heart of a struggle, inspiring hope, or lending strength. If a poem does that, even for one person, I call it a home run. 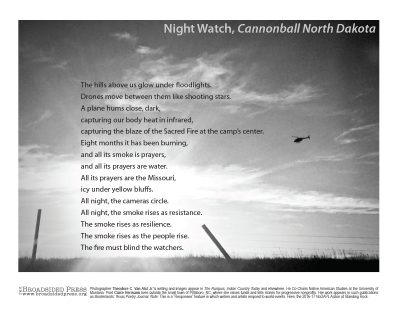 Poet Claire Hermann lives in central North Carolina, where she raises funds and tells stories for progressive nonprofits. Her work appears in such publications as Borderlands: Texas Poetry Journal, Lines + Stars, Bracken, Southern Women’s Poetry Review, and Prime Number. She has a weakness for cats, farmers markets, foggy mornings, and justice. Find her at www.ironclaywriters.com