What did you think an artist would pick up on from your poem?
Poet Brian Clifton: I thought there would be a body/form of a body in the artwork–all three Nightrides feature bodies or hints of bodies. I was super excited to see what elements the artist would focus on. David did a fantastic job blending all the images of the poems together.

What inspires you in this poem?
Artist David Bernardy: For me, it was a mixture of tone and atmosphere. The tone of that first piece (III): “All around me the leaves hang/their concave bodies. They wait/”

I sensed a lovely kind of arrogance at that point, a cockiness. Is this the kind of speaker for whom the leaves wait? Turns out it was the wind, not the speaker, but I liked that tension, and felt it throughout these pieces. A kind of extravagant, languid, seductive confidence, which I imagine the night could justify.

As for atmosphere—this is a series of night pieces, but they are all lit by small fires. The orange leaf—“a shaking flame that gorges itself in the wind,” the moths blending into fire, the night burning its initial into the plastic slide. I imagine these pieces lit the way night-festivals used to be—torches, and barrels of flame, small pools of flickering light.

Did the visual artist refract any element of the poem that made you see the poem differently?
Poet Brian Clifton: The figure looks, to me at least, a little Shakespearean. When I was writing these, I wanted to write Curtail Sonnets (a sonnet form by Gerard Manley Hopkins), so I was thinking a lot about his poetry. Seeing this Shakespearean outfit, I started to think about how these poems continued or disrupted the idea of the sonnet. I guess the artwork made me think more about the history of the form I was using and how far back it goes into Western poetics.

When you began this piece, was it color, shape, or some other aspect that you followed? Did that change?
Artist David Bernardy: Color, for certain. That one orange leaf led me to the rest of it. At a certain point, I focused more on mood, but that, too, originated in the color.

What surprised you about this collaborative piece?
Poet Brian Clifton: Definitely the colors. When I think about night, I immediately think about how dark it is. I think this broadside shows that there are a lot of colors that pop out of the night, which is something I know on some visceral level, but it’s very surprising to be reminded of it.
Artist David Bernardy: At a certain point, I stopped looking at the poem and focused instead on the dream-movie that had played in my head when I read it. So coming back to it, side-by-side with the poem was great fun. I especially like the way Elizabeth designed the ovals of color to put the text in. I think they add to the feeling of something shadowy and flickering.

Have you ever written work that has been inspired by visual art? What was that experience like for you? Why were you inspired to do so?
Poet Brian Clifton: Yes! All the time! I love film (music videos, television, movies). I have a habit of taking scenes and working them into poems. For me, directors and photographers are able to arrange scenes to have such visual power, so it sets a great groundwork for writing tense poems. Whenever I get stuck writing a poem, I think what movie has a scene that will help me get out of this—The Babadook, A Serious Man, It Follows are films I keep coming back to. Or if the poem is too flat, I watch a few music videos on mute to see how it creates tension from visuals—I find myself watching a lot of videos from The Weeknd. I was writing a bunch of poems based on dreams, and the finale of season 4 of Buffy sort of follows all the main characters’ dreams in a very great way, so I tried to work Joss Whedon’s weird plots and associations into the poems.

How does literature fit into your creative life as a visual artist?
Artist David Bernardy: My formal background is in Lit and Creative Writing, so literature is very important to me. I tend to want to tell stories, whether I am writing or drawing—the impulse is the same. As part of that I read, all the time, read all sorts of things. I love novels, poems, essays, short fiction. The reading sparks my art work and my art work makes me want to write, so it is a nicely symbiotic process in that way. A bit like collaborating with your shadow self.

If the Broadsided collaboration were a piece of music, what would it be?
Poet Brian Clifton: “Ljoss” by Forest Swords
Artist David Bernardy: Slow gypsy accordion heard as if underwater or through a stand of oak trees at night.

Read any good books lately?
Poet Brian Clifton: At Night by Lisa Ciccarello, Chord by Rick Barot, King Me by Roger Reeves, and Song by Brigit Pegeen Kelly (I always find myself coming back to it).
Artist David Bernardy: The World is on Fire by Joni Tevis (essays), Beautiful Zero by Jennifer Willoughby (poems), Super Spy by Matt Kindt (graphic novel).

Seen any good art lately?
Poet Brian Clifton: “Visceral Beauty” by Alisa Ross. It was a collection of “taxidermy” and fabric. Basically, Ross made all these intricate fabric/lace/bead deer wall mounts and felted organs. It was really beautiful and disturbing simultaneously. Here’s the gallery: https://www.facebook.com/fractionkc/
Artist David Bernardy: Saw a bunch here in Greenville, SC at the annual Open Studios. Check out the folks at Art Bomb for some examples artbombstudio.com 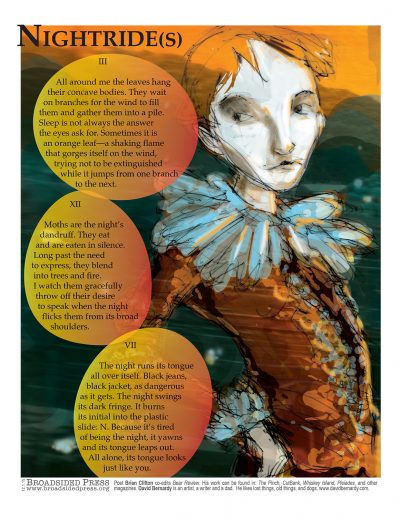 Poet Brian Clifton lived in Kansas City Missouri. His work can be found in Whiskey Island, Juked, CutBank, and other such magazines. He co-edits Bear Review.

Artist David Bernardy is an artist, a writer, and a dad. He likes lost things, old things, and dogs. www.davidbernardy.com