What inspired you to share your work with Broadsided? What is rewarding, exciting, and/or challenging for you in Broadsided’s unique format?
Poet John Bonanni: I have always loved the marriage between poetry and visual art. In 2014, I made my own poetry chapbook, House, out of old receipts and discarded cardboard. Later, at AS220 in Providence, I learned how to operate a letterpress—an old Vandercook. I don’t think the ink from the rollers has ever left my fingernails. Somewhere around this same time I took a class in book arts with Peter Madden, where I learned the aesthetic power of the sculptural elements that make up a book—the accordion, the fold-outs, the sew. Recently, in my latest manuscript, I’ve been exploring how the line can interact in visually compelling ways through concrete poetry. In this way, Broadsided Press felt like a perfect home for my work—it’s been incredible to watch the pairing and the community engagement that accompany the magic of this project.
Artist Michele L’Heureux: I’ve done several collaborations with Broadsided over several years, and each one is a unique challenge that excites and soothes me. I love responding visually to words, and Broadsided’s poets continue to present provocative and delicious work that conjures all kinds of visual imagery. Moreover, I continue to be turned on by the mission of putting art and poetry in public places.

What drew you to create a visual response to this poem, in particular?
Artist Michele L’Heureux: As a graduate student in Philadelphia in the early nineties, I was steeped in queer politics, and so many friends and colleagues were fighting for their lives as HIV and AIDS ravaged the gay community. The opening line of this poem brought me right back to that time. All these years later, I just bought a house, and when I moved in, the woman who lived in the house before me left interesting stones on several of the window sills, so that theme in the poem resonated so strongly and immediately with me. I literally said out loud more than once, “What a nice stone. I wonder what it’s for.”

What did you think an artist would pick up on from your poem? Did the visual artist refract any element of the poem that made you see the poem differently?
Poet John Bonanni: Honestly, I was shocked when I saw that Michele had created this striking image of a window. It’s an image that recurs in multiple poems in my manuscript, and one I kept returning to. For me, it signifies a barrier, but, unlike a door or a wall, one that’s not completely shut. In windows, we have the ability to see through a transparency without actually touching; sometimes we even have the ability to open, to expand the senses despite the barrier. Because “Obituary” contains a multitude of images—oaks, New York City, a ruby, a rock—I was ecstatic to see that Michele chose this as a dominant image. It felt like we were completely in sync without ever even knowing each other. Even more exciting to me is that mark of red that sits on the sill, which can be read by the viewer as a number of things—a floral rose bud? A polished rock? A heart? Yes, a ruby. Yes, a rose. Yes, a heart. Its “shadow” if you will, a dusty pink transparency, much like the collective grief surrounding the emotional center of this poem.

Describe your dream “Vectorization”—where, in your wildest dreams, would you most like to see this broadside posted in the world?
Poet John Bonanni: I know it’s cliché, but I’d love to see it in a museum, printed billboard-size—maybe the MOMA or the ICA—next to a retrospective of ACT UP’s Gran Fury, near some Félix González-Torres, maybe close to some Keith Haring.
Artist Michele L’Heureux: On a window pane of an historic house, with a stone on the sill.

Did anything shift for you or come into new light as you began working on your visual response?
Artist Michele L’Heureux: I started out creating much more elaborate drawings of windows, with detailed curtains and shadows. Somehow they all felt wrong, too much. The more times I read the poem, that act of discovering a polished stone on a window sill jumped out at me and prompted me to focus on the unexpected moment of discovery rather than on the details of the particular window.

Have you ever written work that has been inspired by visual art? What was that experience like for you? Why were you inspired to do so?
Poet John Bonanni: Yes. Just to further my fascination of poetry’s marriage with visual art, my close friend Lauren Wolk has hosted a gallery exhibit for years called Mutual Muses which randomly pairs Cape Cod poets and artists. All poets arrive with a poem that an artist picks at random and must create a piece from. In parallel, every poet selects, randomly, a piece of visual art from which to write a poem. Lauren then curates all of the pairings—I think the show’s had up to 50 artists and 50 poets–all of whom created a piece from the opposing medium. For me, it has always been a source of inspiration and a way to keep myself in a place of noticing—to get out of my head and into detail, like the brushwork of some cobalt blue or yellow ochre. Rather than movement from internal feeling into written image, the process is often the opposite: the image evokes the feeling which then drives the poem. I’ve written a number of ekphrastic poems from this show, but I also pursue my own. A recent one was “Boy in a Turban Holding a Nosegay” by Michiel Sweerts, a painting which popped up on my art history app and which just completely floored me with its mid-1600s attention to gender nonconformity and boyhood femininity.

If this Broadsided collaboration were a specific historic moment, what would it be?
Poet John Bonanni: Now. Both the poem and the art are certainly in conversation with a moment in history, but that conversation happens only after an ability to engage in retrospect and memory and hindsight.
Artist Michele L’Heureux: I think this particular moment in time, since it holds all our memories.

Do you have a favorite, generative prompt for artists or writers you’d like to share?
Poet John Bonanni: This poem actually arrived out of a prompt from Patricia Smith. I had told Patricia that I had really resonated with Victoria Chang’s book, Obit, which she was also a fan of. She told me to write a poem in the style of Victoria Chang’s book. And because when Patricia Smith tells you to do something, you must always rise to that challenge, here is your prompt:  Read Obit, and write a poem in the style of Victoria Chang.
Artist Michele L’Heureux: I recently attended a comics workshop where the instructor had us list a few objects from our childhood that were meaningful to us, then create a comic around one of those objects, what it represented, how its meaning changed, and how we feel about it now. I found it very generative and was surprised by the objects that came to mind and the feelings that emerged.

Read any good books lately?
Poet John Bonanni: The Collected Tim Dlugos, edited by David Trinidad is my best friend. Many of the poems harness a camp and formal play reminiscent of Frank O’Hara. Because of the chronology, you start to know this poet as a post-college boozehound in his 20s, and later, his maturing 30s. He died too young, of AIDS, and the maturity of his later work builds into this metaphysical landscape that came toward the end of his life when he attended Yale Divinity School. Other books that I read within the past few months that I adored: Sula by Toni Morrison, Scar and Flower by Lee Herrick, The Fabulous Ekphrastic Fantastic! by Miah Jeffra, How to Not Be Afraid of Everything by Jane Wong. There’s so much on my nightstand right now.
Artist Michele L’Heureux: I am rereading, for the umpteenth time, Daybook: The Journal of an Artist, which comprises excerpts from artist Anne Truitt’s journals from 1974-1980 as she navigated two major retrospective exhibitions of her artwork. I go back to it periodically as a poignant testament to the anxieties and beauty of a creative life.

Seen any good art lately?
Artist Michele L’Heureux: I loved the exhibition Variance: Making, Unmaking, and Remaking Disability at the RISD Museum, a show that explores how disability and illness are embodied and experienced, and how they have been represented by artists.
Poet John Bonanni: Ditto, Michele! That show kicked ass. My partner and I saw the exhibit together on a Sunday (the free day at the RISD museum), and I particularly enjoyed the way the curators integrated the art related to the disability movement and ACT UP. Shout outs to the RISD Museum!

Anything else? (Here, we invite the collaborators to invent a question, add a comment, or otherwise speak to what the questions so far have not tapped about their Broadsided experience).
Poet John Bonanni: Can’t thank Michele enough! I’d add a teary emoji, but I’ll stick with words—seeing this art makes me feel seen, and I’m always grateful for that, but most especially with poetry, where I never quite understand how a reader will receive what I write. Occasionally, I’ll feel like I’m not “accessible” enough for some folx, but this powerhouse piece of visual art tells me a different story. I love the way that those charcoal lines handle themselves, that reflective composition, the juxtaposition between black and white and color. All of it: Just gorgeous.
Artist Michele L’Heureux: I loved how John captured the essence of memory—the swirl, the ephemerality, the surprise, the sucker punch. 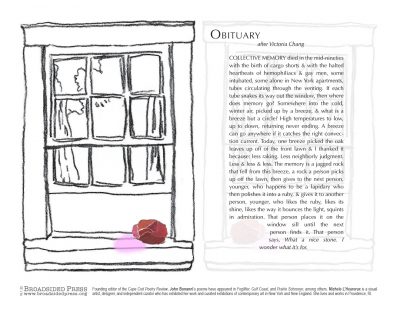 Michele L’Heureux is a visual artist, designer, and independent curator who has exhibited her work and curated exhibitions of contemporary art in New York and throughout New England. She lives and works in Providence, RI.

A Best New Poets, Pushcart, and Best of the Net nominee, poet John Bonanni lives on Cape Cod where he founded the Cape Cod Poetry Review. His poems have appeared in Foglifter, North American Review, Cortland Review, Florida Review, Prairie Schooner, and Gulf Coast, among others. His book reviews have appeared in DIAGRAM, Tupelo Quarterly, Rain Taxi, and the Kenyon Review. His research on poetry as intervention for writing attitudes among learners with disabilities can be found in The Graduate Review.