What did you think an artist would pick up on from your poem?
Poet Nickole Brown: Honestly, I wasn’t sure. One thing I try to do when I publish a poem is to give up the control over it; I mean, there’s a way in which the poem is mine and comes from me, but after it’s out in the world, I no longer “own” it. It’s kind of like having a child—that kid is yours and you’ll always be her mother, but someday, she’s going to move out and have a life of her own.

What inspires you in this poem?
Artist Karen Cappotto: The heroic journey of a woman.

Did the visual artist refract any element of the poem that made you see the poem differently?
Poet Nickole Brown: There’s an element of ferocity and anger in that bright red form; the collaboration brings out those deeper, darker undercurrents—those of my grandmother as a woman trapped, of a woman fighting against a world with so few choices for her.

When you began this piece, was it color, shape, or some other aspect that you followed? Did that change?
Artist Karen Cappotto: I was in NYC at the time I got the poem, and the idea of the American dream and the immigrant’s journey came to the fore, now I am responding to these questions from an artist residency in rural Vermont—the language of earth feels lush here.

What was your hope, as a designer, to bring to this collaboration?
Designer Debbie Nadolney: I wanted to add a little of my voice towards making cohesive the elements of brilliance that were already there.

What surprised you about this collaborative piece?
Poet Nickole Brown: While many of those dark emotions are certainly present in the book as a whole (which is entirely about my grandmother’s life), I didn’t think they were present in just this short excerpt, which is part of a longer poem in five sections. It’s sometimes surprising to see what others find between the lines of your own poems.
Artist Karen Cappotto: How uncomfortable I felt.

Have you ever written work that has been inspired by visual art? What was that experience like for you? Why were you inspired to do so?
Poet Nickole Brown: I’m ashamed to say I haven’t. My wife, Jessica Jacobs, is publishing a book this spring that’s almost entirely ekphrastic (it’s based on the life of Georgia O’Keeffe), so perhaps I should take her lead. It’s certainly proved a fruitful source of inspiration for her.

How does literature fit into your creative life as a visual artist?
Artist Karen Cappotto: I often find the key for a painting in a book just when I need it most.

Describe the collaboration in one word.
Poet Nickole Brown: Vinculum. It’s a word I never get to use, but now I have my chance. It’s a strange and stiff little term from math that basically names a mark that yokes a formula together. For me, this is a fancy way of saying that now that the poem and the art have been put together, they’ve been changed by the dynamic and are bonded together by the collaboration—made into something new.
Artist Karen Cappotto: Amazing
Designer Debbie Nadolney: Spirited

If the Broadsided collaboration were a piece of music, what would it be?.
Poet Nickole Brown: Something nostalgic but unexpectedly fierce; something with equal parts sweetness and resentment. Maybe “Sweet Lorraine” by Patty Griffin.
Artist Karen Cappotto: “Song for Zula,” by Phosphorescent.
Designer Debbie Nadolney: Iggy Pop’s “Lust for Life.”

Read any good books lately?
Poet Nickole Brown: I’m wrapping up a busy semester with my students, so the best books I’ve had time for are the ones I’ve taught: Rookery by Traci Brimhall, Shoulda Been Jimi Savannah by Patricia Smith, and the classic The Great Fires by Jack Gilbert. I already have my stack ready to go for the summer though, which includes some good Southern stuff (a biography of Tennessee Williams and a collection of letters by Flannery O’Connor) and a few random treats, such as Helen Macdonald’s H is for Hawk.
Artist Karen Cappotto: Companion Grasses by Brian Teare. It’s a page turner.
Designer Debbie Nadolney: Joni Mitchell: In Her Own Words

Seen any good art lately?
Poet Nickole Brown: I’ve been absolutely in awe of Stephen Cefalo, a painter who lives not too far from me in Little Rock, Arkansas. Cefalo is a realistic painter, inspired by the ways Rembrandt and Carravagio used paint, and his classically—rendered oils are voluptuous and surreal. My wife gave me one of his paintings for my birthday last year, and I’ve hung it so I can watch the light hit it first thing in the morning. It’s one of my most cherished possessions. (Cefalo’s website)
Artist Karen Cappotto: Of course! All the artists participating at the March 2015 residency I am currently a part of at the Vermont Studio Center opened their studios last night… the work I was privileged to see was extraordinary!
Designer Debbie Nadolney: Recently, the Robert Gober at MoMA … Amazing!

Anything else?
Artist Karen Cappotto: Pepsi… in this case, what sparkles is dark. And thank you for inviting me to be a part of Broadsided Press! 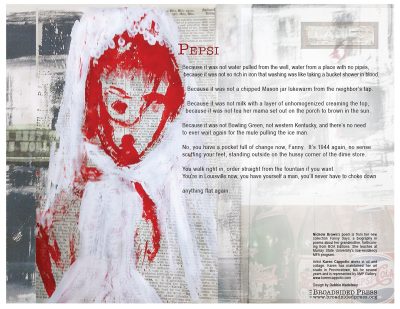 Poet Nickole Brown‘s poem is from her poetry collection Fanny Says, a biography of her grandmother. Her books include her debut, Sister, a novel-in-poems, and an anthology, Air Fare, co-edited with Judith Taylor. She has received grants from the National Endowment for the Arts, the Kentucky Foundation for Women, and the Kentucky Arts Council. She is the Editor for the Marie Alexander Series in Prose Poetry. Nickole lives with her wife, poet Jessica Jacobs.

Artist Karen Cappotto recently won the Lillian Orlowsky and William Freed grant for painting and is featured in a new book by Deborah Forman: Contemporary Cape Cod Artists Images of Land and Sea. Cappotto works in oil and collage and studied at The School of the Museum of Fine Arts in Boston, Boston College, and Manchester College at Oxford University. She has maintained her art studio in Provincetown, MA for several years and is represented by AMP Gallery. www.karencappotto.com