What did you think an artist would pick up on from your poem?
Poet Nicky Beer: Octopuses have such naturally surreal bodies I was hoping this would be a fun chance for the artist to feast upon all the peculiar possibilities that the tentacle aesthetic affords.

What inspires you in this piece?
Artist Se Thut Quon: About this same time I unexpectedly stepped on a bird. A sparrow, it cracked like a gourd, I’d thought, like some hollow, trailing vegetable. It must have come from bathing in the dust next to the sidewalk, and been caught still in some reverie.

I kicked it back into the dirt and walked on, resolving to do something with the two I already had in the freezer.

Neglect and indifference, I hope, can conjure inspiration as well, since nothing escapes the subconscious. I’m still waiting for a nocturnal vision for guidance.

Did the visual artist refract any element of the poem that made you see the poem differently?
Poet Nicky Beer: I think there’s more apocalyptic menace in the image than I’d originally seen in the poem, but considering that the poem itself ends with a speculative gesture towards the kind of nightmares that Salvador Dali might have had, this seems like just the ticket.

When you began this piece, was it color, shape, or some other aspect that you followed? Did that change?
Artist Se Thut Quon: The poem begins, just as the setting of many of Dali’s images, on a stretch of beach. A barren expanse awaits whatever may wash up: an attenuated form emerges from a dark and frothy sea. Collage adds a dreamlike exchange of elements; Medusa’s accusing eyes are inescapable. Clarity makes the sight stranger.

What surprised you about this collaborative piece?
Poet Nicky Beer: How beautifully Se managed to incorporate both the idea of the poem and still make reference to Dali’s style—the eyes in the tentacle suckers are genius!

Have you ever written work that has been inspired by visual art? What was that experience like for you? Why were you inspired to do so?
Poet Nicky Beer: Many times—this poem in particular is inspired by Dali’s 1963’s engraving “Medusa.” What I love about writing about art is that it feels like I’m participating in a conversation that the artist has initiated—although, in reality, the artist him/herself is simply continuing a conversation that’s been perpetuated by other artists before him/ her. I really enjoyed that this was an opportunity to mediate upon a lesser-known piece by a well-known artist—I like how an artist’s drafts, B-sides, and apocrypha can prompt one to rethink a body of work or aesthetic that seems familiar.

If you had to represent the Broadsided collaboration with one word, what would it be?
Poet Nicky Beer: Slither-riffic!

If “Pescados de Pesadillas” were a piece of music, what would it be?
Poet Nicky Beer: Anything sung by Tallulah Bankhead.

Seen any good art lately?
Poet Nicky Beer: I’m currently in love with the work of Sandra Yagi—check her out! sandrayagi.com

Anything else?
Poet Nicky Beer: Yes! Check out this trailer for the documentary “The Life and Times of Paul the Psychic Octopus” by Denver filmmaker Alexandre Philippe on YouTube. 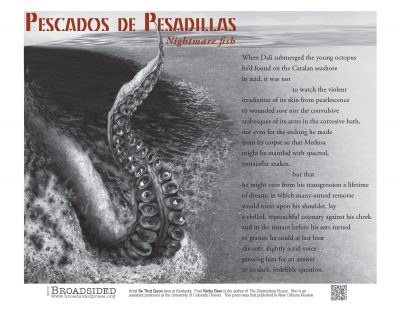 Poet Nicky Beer is the author of The Diminishing House, which won the 2010 Colorado Book Award for poetry. Her awards include a literature fellowship from the National Endowment for the Arts, a Ruth Lilly Fellowship from the Poetry Foundation, a Discovery/The Nation Award, and a Campbell Corner Poetry Prize. She is an assistant professor at the University of Colorado Denver, where she co-edits the journal Copper Nickel.

Artist Se Thut Quon lives in Kentucky. This is his fourth Broadsided collaboration. His response to “Omnivore” (February, 2012) was picked up by the curators of the Moby Dick Big Read to accompany Chapter 108, “Ahab and the Carpenter.”