Note: Usually, in the Q&A, the artist and poet speak about what’s behind their creations and what seeing the other’s work prompted. However, due to Covid-19 and prison regulations, we were not able to ask poets questions at the moment of publication. We’ve asked their teachers to step in and hope, in the future, to add the poets’ voices as well.

Where was this poem written, and why do you teach in the context and program where it originated?
Teaching Writer George Franklin: Mark Jantz’s poem was written at Everglades Correctional Institution, just west of Miami, Florida. It’s a medium-security prison (which in Florida means that it does not have a death row). It is also designated an honors prison, so the prisoners have a bit more in the way of resources than in other Florida prisons. But, prisoners live in crowded unairconditioned dormitories, have no access to the internet, and a very limited library. They especially value the classes provided by volunteers.

I have taught for Exchange for Change for more than four years. I have been on its board, and I’m currently its general counsel. We teach writing classes of all kinds at South Florida prisons, but I mostly stick to teaching poetry because it’s what I do best. There have been few things in my life more fulfilling than teaching writing classes in prison. In general, prison takes people who are wounded from the outset and places them in a dangerous environment that deprives them of their humanity, but somehow, the students I teach are still intelligent, attentive, and appreciative. They come from all types of backgrounds. They take their work seriously and are thoughtful and supportive of each other in workshops. And, they love challenges. They’re a lot of fun to teach, and I’m proud of their accomplishments.

What drew you to this poem or guided your visual response?
Artist Bailey Bob Bailey: The march of the words, their relentless drone and their colorful imagery. The thought of being incarcerated, the monotony of day to day, and then finding beauty where one can in its rhythms. The poem is very visceral and real.

Can you tell us briefly about the prompt(s) you created for the pieces that appear in this folio?
Teaching Writer George Franklin: I simply asked my students to write a pantoum, and I gave them A.E. Stallings’ “Another Lullaby for Insomniacs” as an example. We had been discussing repetition and how it becomes meaningful in poems. This is something that Mark understood right away and put to good use. Prison life is incredibly repetitive. The routine rarely varies. Mark’s poem captures the “[r]obotic regimen” prison imposes on human beings.

If this broadside were a season, what would it be?
Teaching Writer George Franklin: I think of this poem as taking place in late summer or early autumn, which in the Everglades is pretty much the same thing. I love the colors chosen by the artist that give the broadside this quality. (OK, I’m cheating. I know that Mark started the poem at the end of July and then worked on edits into the fall.)
Artist Bailey Bob Bailey: In a weird way, all I could feel was the heat, the overwhelming low-grade baking of summer.

Who would you give this broadside to, if you could choose anyone in your life, and why?
Artist Bailey Bob Bailey: I want my niece to see it. I want her to post it at the School of Theology where she works. I want people to see and think about the lives of people in prison.

How has teaching in settings of incarceration changed both your students and you?
Teaching Writer George Franklin: I don’t know how my classes have changed my students. I have never set out to change anybody. I get a sense while talking with them that being given a context where it’s OK to express feelings, to let other people into your head, and to know that the other writers in the group are doing the same, may make a difference and make prison more bearable. Many of my students are lifers without expectation of release. For them, I don’t think it’s about change. It’s about survival.

What would you want the viewers of this image to know about you?
Artist Bailey Bob Bailey: The world of art, poetry, and writing are forever freedoms, no one can take that away from you. The arts are the only real way to prove we are humans on this planet.

Anything else? (Here, we invite folks to invent a question, add a comment, or otherwise speak to what the questions so far have not tapped about their Broadsided experience).
Teaching Writer George Franklin: I just want people to know how important it is to writers on the inside that their poems are out there being read, each one a communication from one person to another.  On the outside, we take this for granted; people on the inside do not. It is even more gratifying for a prisoner’s poem to appear as a broadside. The prisoner knows then that not only is the poem being read but that an artist took the time and effort to read that poem closely, to listen for the subtleties of tone and meaning necessary to suggest the artwork for a broadside. The message that goes back to the writer inside is, “You have been heard. Other people have listened and will listen. Even though you are cut off from the outside by razor wire and armed guards, even though the state has declared that you no longer have the same rights as others, that you barely exist, you have been heard.” When readers spend a moment with this broadside, they are engaged in something large and meaningful. The prisoner who wrote the poem may never know you or know that you read his poem, this broadside, but I promise you that he is more grateful that you took the time to see it and read his words than you can possibly imagine. 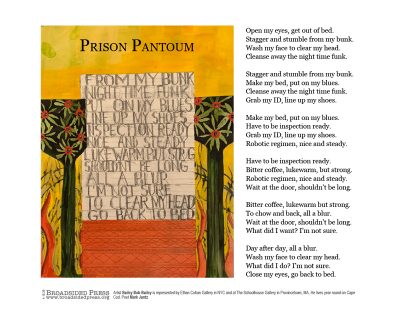 NOTE: This broadside is one of four published for our “Inside Voices: Collaborations Across Incarceration” special folio, which gathers work written by people who are incarcerated. Broadsided artists responded visually to the poems. This folio will grow over time. If you write from or teach in a prison and would like your work or the work of your students to be considered, please reach out to us.

Artist Bailey Bob Bailey studied sculpture at Virginia Commonwealth University. He recently had a survey exhibition at the Provincetown Art Association and Museum titled CAVE ORE BRIDGE. Bailey is represented by Ethan Cohan Gallery in NYC and Beacon, NY and at The Schoolhouse Gallery in Provincetown, MA. He lives year round in Truro, MA.

Poet Mark Jantz is a student with Exchange for Change at Everglades Correctional Institution and has a particular interest in exploring poetic forms.

Filed under: Broadsided Responds, Inside Voices: Collaborations Across Incarceration, 2020