What did you think an artist would pick up on from your poem?
Poet Amy MacLennan: I expected a sense of duality or mirroring from the poem. A sense of reflection.

What inspires you in this poem?
Artist Løchlann Jain: I love the play of surfaces in the poem, and the literal and figurative slippages in how and what can be gripped and grasped.

Did the visual artist refract any element of the poem that made you see the poem differently?
Poet Amy MacLennan: I think it was my perception of interconnectedness from the visual art that made me take a different stand in regards to my own poem.

What surprised you about this piece, once you saw the artwork and poem together?
Artist Løchlann Jain: The drawing was one that I did after I read the poem, but was not initially for Broadsided. When I saw the pieces together, however, I immediately saw how the image really got the heart of what I had been trying to do in a more literal way in my attemps at “illustration”, which was to try to draw the shapes and shards of broken glass. In that sense, the drawing based roughly on cartographic drawings, better reflects the multi-dimensionality of the poem, I think, than the drawings that tried too hard to do that.

What surprised you about this collaborative piece?
Poet Amy MacLennan: The artist’s linearity and non-representational approach.

When you begin a piece of visual work (or, if that’s too broad, when you began this piece), is it color, shape, or some other aspect that you follow?
Artist Løchlann Jain: With all my drawings, I follow my intuition—even though that sounds goofy.

Have you ever written work that has been inspired by visual art? What was that experience like for you? Why were you inspired to do so?
Poet Amy MacLennan: Not really. I tend to be inspired by “intersections” or “collisions” of things, like images or words. Stand-alone pieces of art haven’t been a source of inspiration for me yet.

If you had to represent the Broadsided of “Replacing the Window, Downtown Medford” with one word, what would it be?
Poet Amy MacLennan: Abstracted
Artist Løchlann Jain: Scale

Read any good books lately?
Poet Amy MacLennan: I’m really drawn to autobiographies of poets, so I just re-read Bitter Fame: A Life of Sylvia Plath by Anne Stevenson, and I’m halfway through Jane Kenyon: A Literary Life by John H. Timmerman. The best “non-poet” book I read earlier this year was Tattoo Machine: Tall Tales, True Stories, and My Life in Ink by Jeff Johnson. Terribly funny book by a Portland tattoo artist. I also just realized that I only read books with colons in their titles. I see that I need a new punctuation direction as far as books go.
Artist Løchlann Jain: Verghese, Cutting for Stone and Roy, God of Small Things.

Seen any good art lately?
Poet Amy MacLennan: The last great show I saw was the Frida Kahlo exhibit at the San Francisco MoMA in June 2008. I haven’t had a chance to head to a metropolitan area just for art; I hope to remedy that this summer.
Artist Løchlann Jain: I recently spent a week in Udaipur, India, and spent a lot of time in artists’ workshops. The art there is nearly entirely directed toward the tourist market, and is constituted mainly of mass-produced (by hand) copies of miniature elephants, tigers, soldiers, and so on of the mughal era. Even still, the places where the young men are working are welcoming and themselves off the tourist beat, and I spent time drawing with them and talking to them. Even though the art is for tourists, and mostly reproduces illustrations stroke-for-stroke, some of the work is very fine and beautiful.

Anything else?
Artist Løchlann Jain: It is cool to see what comes of collaboration among so many parties. And now let’s have a real party… 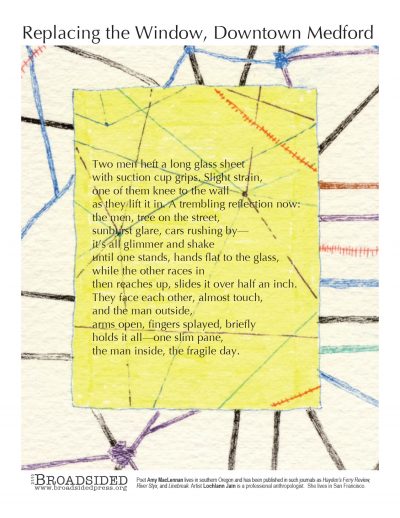 Poet Amy MacLennan has been published or has work forthcoming in Hayden’s Ferry Review, River Styx, Pearl, Linebreak, Cimarron Review, New Plains Review, Folio, and Rattle. Her poems appear in the anthologies Eating Her Wedding Dress: A Collection of Clothing Poems from Ragged Sky Press and Not a Muse: The Inner Lives of Women from Haven Books.