What did you think an artist would pick up on from your poem?
Poet Chanda Feldman:  On the description of a shore full of fish, on the watery elements.

What inspires you in this poem? What drew you to it?
Artist Sara Tabbert:  I have rarely been taken so directly by a poem to a personal experience. When I read it, I was back a few years ago biking the Natchez Trace Parkway, at the reservoir just outside of Jackson, Mississippi, on a swampy sunny April afternoon. (The storm came the next day, the only difference.) There is a timelessness to this poem, something I also felt in the air that day.

Did the visual artist refract any element of the poem that made you see the poem differently?
Poet Chanda Feldman: I thought more about the anticipatory moment of approaching the river rather than the arrival at the river.  The visual art extends the poem by focusing on the woods as a kind of rising and closing curtain on the action of gathering up the fish.

When you began this piece, was it color, shape, or some other aspect that you followed? Did that change?
Artist Sara Tabbert: I started off in a much different direction. It was a block print, very literal and illustrative of the poem. I hated it. I decided to think instead about the water, the light, the movement of things in a backwater that would have been shifted and moved with the river during the storm. I love the poem and wanted to have something that could sit next to it rather than try and repeat what was already said so well.

What surprised or struck you once you saw the finished broadside?
Poet Chanda Feldman: The textural layering and tactile quality of bark and leaves in the visual art.  The woods aren’t given much description in the poem, but were there in mind during the making of the poem.

Have you ever written work that has been inspired by visual art? What was that experience like for you? Why were you inspired to do so?
Poet Chanda Feldman: Yes, I have written a few ekphrasis poems and they were inspired by a sense that the art was a mirror for the speaker.  For instance, after seeing Romare Bearden’s art work “Farm Couple”, I wrote a poem about it because I recognized in it my own memories of family and place.  Lately, I’ve been interested in writing poems that look to narrate the space of the museum as much as the art.

How does literature fit into your creative life as a visual artist?
Artist Sara Tabbert: If forced to choose between great books or great art, books would win every time. Is this a terrible thing for an artist to confess? I have always been a hungry, hungry reader. I do most of my work while listening to audiobooks. It may be the best of both worlds.

If this broadside were a piece of music, what would it be?
Poet Chanda Feldman: Rhiannon Giddens playing banjo on “Come Love Come”.
Artist Sara Tabbert: I don’t know but I think it would have a trombone in it.

Seen any good art lately?
Poet Chanda Feldman: It was a treat to see some works at the Smithsonian American Art Musuem, especially The Death of Cleopatra sculpture by Edmonia Lewis and Clementine Hunter’s Melrose Quilt.  Also, Ibrahim Mahama’s installation, Fracture, at the Tel Aviv Museum of Art.
Artist Sara Tabbert: I visited the lovely mosaic columns in the Seattle airport last week.

Anything else? (Here, we invite the collaborators to invent a question, add a comment, or otherwise speak to what the questions so far have not tapped about their Broadsided experience).
Poet Chanda Feldman: Thank you for choosing my poem. 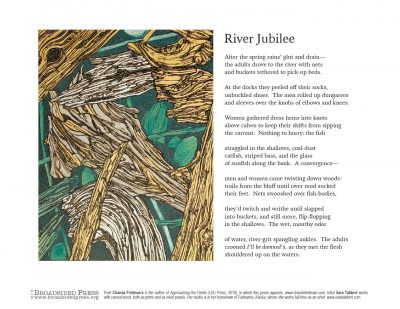 Poet Chanda Feldman is the author of Approaching the Fields, forthcoming from LSU Press in 2018.  Her poems have appeared widely including in Cincinnati Review, Ecotone, Prairie Schooner, The Southern Review, and Virginia Quarterly Review.  A former Wallace E. Stegner Fellow in poetry at Stanford University, Chanda is also a recipient of fellowships and support from the Bread Loaf Writers’ Conference, Cave Canem, the MacDowell Colony, and the National Endowment for the Arts.  She received an MFA from Cornell University.  Chanda is currently a Visiting Assistant Professor of Creative Writing at Oberlin College.

Artist Sara Tabbert works with carved wood, both as prints and as relief panels. Her studio is in her hometown of Fairbanks, Alaska, where she works full time as an artist. Her work ranges from intimate pieces on paper to large public commissions. She received a BA in studio art from Grinnell College and a MFA in printmaking from the University of Nebraska, Lincoln. Recent residencies include Zygote Press in Cleveland and the Taft-Nicholson Environmental Humanities Center in Montana.