What did you think an artist would pick up on from this poem?
Poet Gabrielle Calvocoressi: What I hoped (and what happened) was that the artist would find parts of the poem that I hadn’t realized were there. It’s a poem than is still a mystery to me in many ways. On one hand it deals with two levels of history I believe myself to be “versed” in: the church and synagogue bombings that took place in the summer of 1964 and my mother’s mental illness. On the other hand both of those situations have all kinds of metaphorical weight for me that I’m sure I haven’t gotten at entirely. I suppose I think of this poem as a kind of ghost story and I wondered if Alesia would guide me to the deeper levels of that haunting.

What inspires you in this poem?
Artist Alesia F. Norling: The imagery is irresistible to me as an artist. I also have always felt that the link between religious belief and insanity is a tight and strong one.

Did the visual artist refract any element of the poem that made you see the poem differently?
Poet Gabrielle Calvocoressi: I’m really interested in the way Alesia has used printed text in her own work. I am referring to the typeset part of her piece that lives behind my own words. Those figures are a mystery to me and yet they move me deeply. On the most obvious level they recall newsprint and catalogues and that speaks to the historical nature of the poem. They also feel rural to me in some way and that is very much in keeping with my own upbringing and the places where many of these bombings take place-the idea that tremendous violence happens in places where people are supposed to be “good” Christians and looking out for one and other. I am interested in the ways places like the ones these figures call to mind (for me) allow a great deal of violence to occur just as they surely provide shelter and care for so many.

What surprised you about this piece, once you saw the artwork and poem together?
Artist Alesia F. Norling: More satisfying than surprising.

What surprised you about this collaborative piece?
Poet Gabrielle Calvocoressi: I’ve always wanted to work with a visual artist and I am deeply invested in the project of Broadsided. I was surprised by how much anticipation I felt as the day drew near for my Broadside to appear. I was like a kid at Christmas. I was also moved and surprised by how powerful it felt to imagine all the places I could put this poem up, how many different conversations I could be a part of. I think the Broadsided project is poetic and political all at once (if they are different things… which I think they probably are not). Because so much of my work has to do with the consideration of those who are not given a voice, the idea of placing this piece all over the world is doubly powerful to me. My mother’s mental illness was something I really didn’t talk about when I was young and I often think how harmful that was to me and her and the relationship we had and were not able to have. I like the notion that I am “speaking” my piece as I walk through the world posting this. And I love the notion that others might be tempted to do the same.

When you began this piece, was it color, shape, or some other aspect that you followed?
Artist Alesia F. Norling: I made a list of words from the poem that popped out at me and then began forming them into visuals.

Have you ever written work that has been inspired by visual art? What was that experience like for you? Why were you inspired to do so?
Poet Gabrielle Calvocoressi: I am often inspired by photos, which I consider to be visual art. Also movies play a huge roll in my imaginative life. In fact, most of my poems start out in my head as images or short films. It’s a really vivid way of moving into a poem. It immediately places you into the position of making a world, which in turn makes you immediately responsible and complicit and engaged. Much like walking onto a busy intersection and putting up a Broadside.

If you had to represent the Broadsided of “Rosary” with one word, what would it be?
Poet Gabrielle Calvocoressi: Luminous.
Artist Alesia F. Norling: Connection

Read any good books lately?
Artist Alesia F. Norling:
Poet Gabrielle Calvocoressi: I’m having a paperback summer! That’s what I’m calling it. I am reading or re-reading books one thinks of as classics of one sort or another. They need to be paperbacks, generally less than $7. They need to fit in my coat pocket or my very small bag. They must be able to come to the beach and get sand in their spine. I’m interested in thinking about these books as they first appeared in the world, before we put all of our hopes and dreams and baggage on them.

Seen any good art lately?
Artist Alesia F. Norling: My 7-year-old daughter is getting really good at drawing dogs!
Poet Gabrielle Calvocoressi: I mean, this is LA. The Hammer Museum always has amazing shows. I’m on my way to the LACMA to look at Catherine Opie’s new work (“Figure and Landscape”). I am so excited for that (website)

And the really exciting art news is that I am starting a reading series with Heather Taylor who owns the highly respected Taylor de Cordoba gallery in LA (website). She also writes about food for the Huffington Post. Our first reading is in October and will pair Dana Goodyear with a remarkable chef. And the event will happen within the four walls of Heather Taylor and Alex de Cordoba’s incredible gallery

Which is my way of saying poems and visual art and making of all sorts is the world I like to live in. I’m really grateful to Broadsided for adding to my world.

Anything else?
Poet Gabrielle Calvocoressi: Well, I am the virtual editor of Broadsided. So I would love to know how I might use my own Broadside to begin a larger conversation on Twitter (@broadsidedpress). I’m trying to make Twitter another space for the Broadside to live.

Editor’s Note: Gabrielle Calvocoressi was invited to be our virtual editor after her poem was selected for publication. 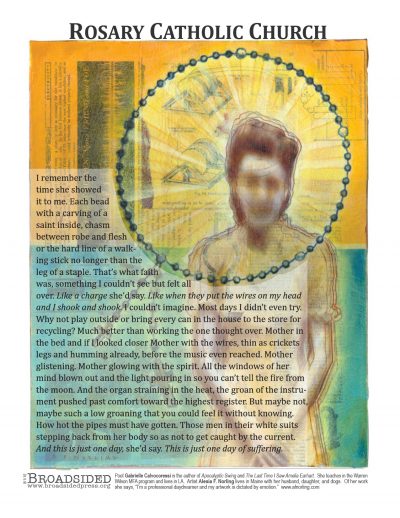 Poet Gabrielle Calvocoressi is the author of Apocalyptic Swing and The Last Time I Saw Amelia Earhart. She lives in Los Angeles, teaches at Warren Wilson, and travels widely.

This month, the poem inspired another artist to respond visually as well—although Elizabeth Terhune did not “dibs” the poem, she generously shared her work with us. Below is the watercolor that she created.