What made you think of Broadsided for this poem?
Poet Sheila Squillante:  I have always been completely delighted with projects that merge text with image, and collaboration generally excites me.

What inspires you in this poem? What drew you to it?
Artist Se Thut Quon: I am attracted to the poem’s employment of the science of vision.

I remember as a child at bedtime, keeping my eyes open to the almost dark room and watching the space getting filled with transparent or colorful cellular streams coming in through the walls, which moved just beyond my anticipation. This was a wonder—an energy that filled space, visible only in the dark. And I feared it because I could see the patterns still when my eyes were closed and I wanted to sleep. The baby in the poem is so confident, or maybe exasperated.

When my sibling in the next bed told me, “I don’t know what you are talking about,” the phosphene display became a lesson in the subjective, hallucinatory nature of perception.

Describe your dream “Vectorization”—where, in your wildest dreams, would you most like to see this broadside posted in the world?
Poet Sheila Squillante: In the Buhl Planetarium of the Carnegie Science Center here in Pittsburgh, or that small, sort of ramshackle one we found by the side of a Florida road when my kids were little. I’m sure there were alligators lurking in the swale.
Artist Se Thut Quon: In the space station.

What did you think an artist would pick up on from your poem? Did the visual artist refract any element of the poem that made you see the poem differently?
Poet Sheila Squillante:  I expected celestial imagery.

What surprised or struck you once you saw the finished broadside?
Poet Sheila Squillante: That the artist was able to capture the celestial and biological spirit of the poem. So we get both outer space and inner space. And then, too, there is the technological—the pixilation of a television screen. It’s exciting to see all of this packed into one space. It’s terrifying and invigorating to be on the inside of Baby’s eye.

When you began this piece, was it color, shape, or some other aspect that you followed? Did that change?
Artist Se Thut Quon: I thought of flowing in and pushing out and a feeling of exhaustion.

Have you ever written work that has been inspired by visual art? What was that experience like for you? Why were you inspired to do so?
Poet Sheila Squillante:  Yes. My husband is an experimental photographer, and I have written a series of poems in conversations with his images. He had given these very abstract images mysterious, narrative titles that invited me in to explore. I’ve also co-written a writing craft book with my friend, the poet Sandra L. Faulkner. My most recent project was a collaboration with the work of 18th century German poet Wilhelm Muller, whose poems became the song cycle, Winterreise, by Franz Schubert.

If this broadside were a type of weather, what would it be?
Poet Sheila Squillante:  Polar vortex.

Seen any good art lately?
Poet Sheila Squillante:  I haven’t seen it at the Guggenheim, but images from Hilma af Klint’s collection are breaking my heart and brain in the best way.

Anything else? (Here, we invite the collaborators to invent a question, add a comment, or otherwise speak to what the questions so far have not tapped about their Broadsided experience).
Poet Sheila Squillante:  I just want to thank Se Thut Quon for this spectacular rendering of my poem, and Broadsided Press for giving it a venue. 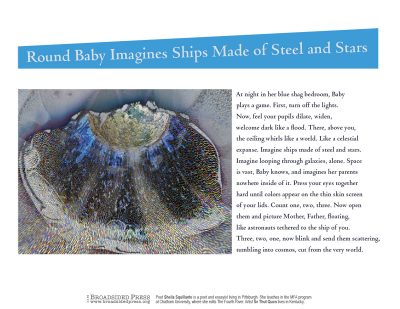 “Round Baby Imagines Ships Made of Steel and Stars” (PDF)

Poet Sheila Squillante is the author of the poetry collection, Beautiful Nerve (Civil Coping Mechanisms) as well as three chapbooks. Recent work has appeared in places like Copper Nickel, Indiana Review, and North Dakota Quarterly. She teaches in the MFA program at Chatham University where she edits The Fourth River. She also serves as the Blog Editor for Barrelhouse.