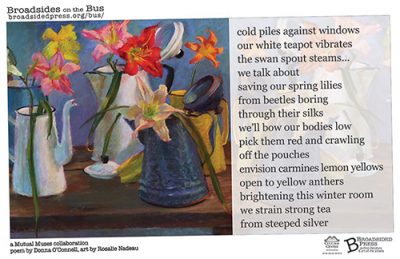 Rosalie Nadeau: A master painter and inspired teacher, Nadeau balances powerful color and generous texture with classical form. Her paintings are published and in CCMA’s permanent collection. Her pastels earned signature memberships. She shows at Left Bank in Wellfleet and at Trees Place in Orleans.

Poet Donna O’Connell-Gilmore lives in Orleans and is a member of the Outer Cape Line Breakers and The Narrow Land Poets. She is a regular at open mics on the cape. Donna is a former newspaper columnist writing about birds, and nature is a prevailing force in her poetry.