What inspired you to “dibs” this poem?
Artist Elizabeth Terhune: I’ve collaborated on two broadsides, “Mahogany” by Leslie LeChance was the first, “Snow Over Shavers’ Fork” is the second.

Both “Snow Over Shavers’ Fork” and “Mahogany” appealed to me because there were images that I related to. Each poem has as a focus the visual creation of place that is in deep relationship to the interior world of the poet. The sense of inwardness, a person in meditative observation is something I understand. I think we all do.

What was interesting this second time was that what drew me to think I could respond visually to the poem—the images—ultimately made it difficult. The world of “Snow Over Shavers’ Fork” is the quiet blurry obfuscated world of snow falling, of graying weather enveloping the visual field. It is a world of disappearance, soft edges, only peculiar details remain. By definition, this is not a graphic world.

If this poem were a weather pattern, what would it be?
Poet Brian Barker:  A blizzard, of course.

In what sense did the poem first present itself as a collaboration with a visual medium? Did it come to you first as image? As an idea? Music? Narrative?
Artist Elizabeth Terhune: I’m the most unnarrative person I know. I think in images and sounds so that is how all ideas come to me.

In the case of “Snow Over Shavers’ Fork” I immediately saw hands and trees—maybe a merge of the two, since they share part of a shape. I was also very much taken with the highway suspension bridge structure. However, to respond adequately to the theme of isolation and condensed feeling, the more I worked, the more I found that I needed to remove visual elements—reduce the information. Interesting for me was that throughout this whole process I opted to ignore the panning headlight. In the end I inserted it obliquely in the angle and shape of the handprint. It came as a surprise to me.

The sounds in “Snow Over Shavers’ Fork” are swallowed and muffled, like “the mountains chalk-blur shifts.” The churning water would be a low churning where any hiss would be pulled under. Snow has a peculiar way of both abbreviating sound and creating a feeling of echoing distance. In “Mahogany” the radio sounds are introduced—given a visual equivalent—by the jittery bed details, which can double for a kind of broken-voice static.

What is behind your choice of media?
Artist Elizabeth Terhune: So far, I’ve used ink and watercolor. These are media that I’m quite familiar with and I have an intuitive sense that they “belong” with text. They can be worked informally and allow me to cycle through many different paintings, trying things out in the course of finding the image elements I settle into. What I’ve been pleased to discover is that working on the broadsides has led me into a new area for my own work. As an abstract painter I primarily work with shape, color and surface. Both poems presented me with the opportunity to work with the human figure. Probably about a decade ago I did a lot of work exploring illustration that really went nowhere. While it was fun, it didn’t fit into anything I was producing. Doing the broadsides has presented me with a place to utilize some of what I was working with back then. I am fascinated by how subtle contour information defines a pose (making a figure face forward or backwards, finding the hip to leg relationship that will make it lean into one leg, a dropped shoulder, how to tilt the head, etc.) and how easily a pose changes when nudging wet media along with a brush. I’ve found that by the time I’ve come to the end of my search, the figures have rotated, moved all over the page, stood, kneeled, dogs have entered and walk off. I feel I really know them.

Were there problems?
Artist Elizabeth Terhune: The problem I have is technical. I don’t have a scanner and a friend scans the images for me as a favor. Working beyond the 8 x 10 inch scan size is impossible. So, I’m restricted by size and I always try and think of leaving room for the text. So this kind of solving a technical problem is a meat and potatoes situation for a visual artist. But it does require consideration.

If the broadside collaboration were a land formation, what would it be?
Artist Elizabeth Terhune: If this poem were anything else other than a poem I imagine it would be a cello sonata.
Poet Brian Barker: Pre-global warming arctic ice shelf.

Let’s say that your broadside collaboration was a first date. How did it go? First base? Second? Nightcap? Would you make plans for a second date?
Poet Brian Barker: Eh. . .I’m happily married.
Artist Elizabeth Terhune: Well, since this is my second broadside, clearly I’m into the second date phase. However, despite the relative simplicity of the image I did for “Snow Over Shavers’ Fork” it did not come easily. Basically I’m pleased. Doing these has pushed me to do work that I might not otherwise have done. That’s usually a good thing. The work interests me.

There is a third party to acknowledge, however, who is part of the collaborative process. In addition to the poet and artist there is the person who does the graphic layout. Printed text—how and where it is placed, the type size, the font—all the variables that go into designing a page are hugely important, particularly when the whole point is to create a visually arresting and communicative broadside. I was particularly intrigued with the layout for “Snow Over Shaver’s Fork”, for example. I like the text obscuring bits of the handprint, but this is not something I would have thought to do. I felt that it created the sense—visually—of falling snow and a kind of echoing and this pleased me. The primary reference of the handprint is, of course, the narrator’s hand. But it is intentionally a splotchy print, fragmented, which I did so that it could also imply the falling snowflakes (and also, as I said, the wedge shape making the panning headlight). What I sensed all along was that this poem is overwhelmingly about touch—it begins with weight and lacquering and a panning light and moves into the sky being dragged into the trees, the mountains being smeared to a blur and the snow blanketing and muting everything and then the falling down—to touch the ground (literally and metaphorically). So my decision to focus on the hand was easy and, as I’ve stated, initially I saw the hands as extended out into trees to get the feeling of the person reaching out and merging, blending into the space of contemplation. So having the text involved in that issue of touch is really wonderful.

Read any good books lately?
Artist Elizabeth Terhune: I tend to dip in and out of books of poetry. I’ve read and reread Rilke’s Sonnets to Orpheus (Snow, trans.) for months now, and have read into various other collections of his poetry. Rilke is a constant for me. I’m beginning David Young’s translation of Petrarch’s sonnets. Also, Phillis Levin’s collection The Penguin Book of the Sonnet with its wonderful introduction by her. Then there is an amazing book, Darkness Spoken by Ingeborg Bachmann (Peter Filkins, trans.). As for fiction, I just finished Dickens’ Pickwick Papers, and though it wasn’t my favorite, I adore Dickens. For nonfiction I’m reading a book of interviews with the British painter Francis Bacon. Actually, I have a list of over 36 books I’d like to get through this year—which sadly will never happen. I’m not a fast reader.
Poet Brian Barker: Kawabata, House of the Sleeping Beauties.

Seen any good art exhibits lately?
Artist Elizabeth Terhune: People should travel more—if they don’t already—to see the art we have in this country. There is a wonderful show of Constable’s large oil sketches at the National Gallery in Washington D.C. as well as a beautiful show of diptychs which included a painting of the Virgin Mary by Rogier Van der Weyden that is breathtakingly beautiful. I’ve only ever seen it in reproduction and never thought I’d get to see the thing itself. Also at the National Gallery, as part of the permanent collection, are Degas’ original waxes for his small sculptures. They are astonishing. Closer to home, Brice Marden at MoMA and as soon as the crowds thin out, Spanish painting at Guggenheim.

Can I mention music. How about Cecilia Bartoli singing anything. A lot of Bach. Das Wohlemperierte Klavier. A lot of Beethoven piano sonatas.

Anything Else?
Artist Elizabeth Terhune: I feel a deep sense of responsibility to the poets. I feel I am working for them. The point of the image within this context is to be a visual draw for the poem. It is important for me to work with this guideline or underlying cause. It is a different approach—in some ways—than just making an image for its own expressive purposes. One of the things I enjoy about collaboration is that it pushes me into new territory. 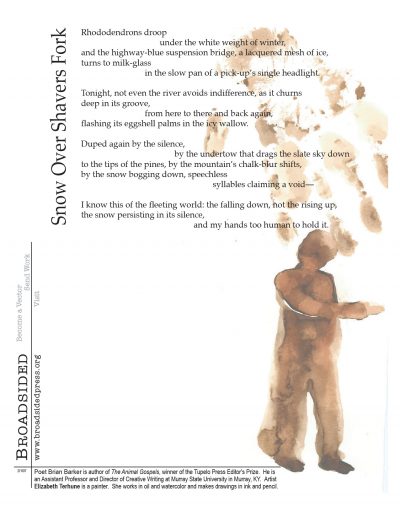 Poet Brian Barker‘s first book of poems, The Animal Gospels, won the Tupelo Press Editors’ Prize. His poems, reviews, and interviews have appeared in such journals as Poetry, Agni, Quarterly West, American Book Review, The Writer’s Chronicle, The Indiana Review, Blackbird, Sou’wester, and River Styx. His awards include an Academy of American Poets Prize and a finalist recognition for the Campbell Corner Poetry Prize. He earned a B.A. from Virginia Commonwealth University, an M.F.A. from George Mason University, and a Ph.D. from the University of Houston. He has taught at the University of Houston and the University of Missouri, and is currently an Assistant Professor and Director of Creative Writing at Murray State University in Murray, KY.