What inspires you in this poem?
Artist Stacy Isenbarger: I find the atmosphere of the poem most inspiring. I feel like I’m stepping into a glorious/inglorious moment of nature’s potential fury when reading it. It reminds you of those moments when you know you are insignificant, life’s quirky, and nature is grand in its command over you.

What did you think an artist would pick up on from your poem?
Poet Robert Wrigley: The Jesus over Rio seemed a good possibility, as it was for Stacy. Ditto dandelions, which Kat worked in. I confess to being fairly awestruck by the work of visual artists, especially in response to poems, and what these two artists produced pleases and delights me. The way one brings in the great menacing clouds, the other the rain—well, every time I look at either broadside, I just sit and grin like an idiot.

When you began this piece, was it color, shape, or some other aspect that you followed? Did that change?
Artist Stacy Isenbarger: Contrasting sensations set a pace and rhythm in the poem and visually it builds into a field of sharp diagonals for me—hot to cold, sharp to soft, harsh to calm, irreverent to spiritual, etc. The collision of rhythms, once stacked in my mind, linger with the potential to impact again, so when sketching out my initial response, lines built upward into something foundational, then fell away softly before another aggressive line could be added.

This poem feels like the start of a grander event; the fatal diagonal of gold was my response to this and acts as a foreshadowing projection from the silhouetted figure that is both the Rio figure looming above us and the gothic standing in front of us.

Did either visual artist refract any element of the poem that made you see the poem differently?
Poet Robert Wrigley: Kat looks, and makes me see, minutely, I think; Stacy looks large; this strikes me as a wonderful way of seeing the poem from two contrasting and yet entirely complimentary ways. The poem means to offer both possible perspectives, and the fact that the artists have registered these two perspectives opens the poem wide. That’s a lovely thing to encounter, both from my point-of-view and, I believe, from the point of view of the reader-looker.

What caught your eye in the visual response by your fellow Broadsided artist?
Artist Stacy Isenbarger: The visual textures and use of media caught my eye first. I imagine that the process of cutting and gluing created a similar rhythm in its making. I enjoy how it also makes me consider steeping out barefoot and vulnerable during a rain shower.

Does anything surprising rise to the surface when you consider the two pieces of art and your poem together?
Poet Robert Wrigley: Well, any sort of other artistic response to the poem surprises me, in the sense that surprise is a necessary component of all of art. We “see” poems, of course, as constructs on the page, and to this extent, most poems look alike; they look “like poems.” But of course the imagery of the poem, rendered as language, means to bring forth visual (and musical, as well as all other manner of sensory) details. The surprise for me is simply that the artist necessarily focuses on particular imagery, and by such a focus—and this is what strikes me as the sweet miracle of this sort of collaboration—the artist actually enlarges the poem’s saying.

What is it like to see both visual responses to the poem?
Artist Stacy Isenbarger: When I consume a broadside, I enjoy how collisions of suggestive imagery and suggestive words make me call to mind even further imagery. But when taking in Kat’s work, having already challenged myself to see what Robert’s words make me consider visually, I find myself thinking further about the process of her own design decisions. Instead of thinking about how the broadside work speaks as a collective voice, I think about the artist’s choices.

Have you ever written work that has been inspired by visual art?
Poet Robert Wrigley: A few. Most successfully, I think, a poem that responds to and builds a narrative from Thomas Hart Benton’s great (and immense) “Persephone.” There have been a few others as well, but I think I often tend to avoid visual art as the subject of, or the trigger for, poems. Why? Probably because I believe poetry’s very medium—language—is suspect. Sullied, even. We write poems in the same language with which we woo and wound; it’s the same language used in the world of political and capitalistic mendacity. Not so, or not so much so, with the visual arts or, say, music. No one need translate a painting or a sculpture, so there’s something essentially purer in the other arts. I remember a story of someone in a gallery, looking at a photograph, by Yusef Karsh, of the hands of the great pianist Vladimir Horowitz. Another patron said something like, “Beautiful, isn’t it?” and the first viewer said, “Shhh, I’m listening to the music.” Visual art can do that; so can poetry. A poem written in response to a visual work has to accommodate not only what is visual, but all the other sensory impressions rendered therein. And then it has to do more; it has to do what IT has in mind. What I’m saying is, it’s very, very difficult, so I do it now and then, but not often.

If you had to represent your Broadsided collaboration of “Spring Is Here” with one word, what would it be?
Artist Stacy Isenbarger: Downward
Poet Robert Wrigley: Transcendance, again. Only from, one might say, the perspective of the earth and its humblest flowers. Those dandelions.

If you had to represent Kat Clancy’s version of the collaboration with one word, what would it be?
Artist Stacy Isenbarger: Underfoot
Poet Robert Wrigley: Transcendence. That’s what’s (hopefully) in this poem. The grandness of the moment, the “as though” made real. That goth boy become, for an instant, the great icon.

Read any good books lately?
Artist Stacy Isenbarger: I just finished Underworld by Don DeLillo and then got to devour Still Life with Oysters and Lemon: On Objects and Intimacy by Mark Doty. My stomach is still happy.
Poet Robert Wrigley: Simon Armitage’s The Shout: Selected Poems; Mary Ruefle’s Madness, Rack, and Honey, a collection of lectures/essays on poetry.

Seen any good art lately?
Artist Stacy Isenbarger: I just spent a few days walking through elementary and middle school hallways in the Atlanta Public School system. Those teachers should be praised for the creative challenges they deliver their students and they joy they have in supporting their students’ success. Through them, good things are coming!
Poet Robert Wrigley: I was in Portland, Oregon, yesterday, and I took a walk through the Portland Farmer’s Market, and there was an artist who had made large and elaborate blossoms from cast-off plastic water bottles. They were spectacular, and they also made, of course, a comment on the whole idea of cast-offedness, the plague of plastic that afflicts us.

Anything else?
Artist Stacy Isenbarger: I just want to say thank you to Robert and Stacy, the City of Moscow and Broadsided Press for allowing me to be part of such a unique and wonderful collaboration.
Poet Robert Wrigley: Only that I am honored to have seen such wonderful work done in response to something I’ve written. For which I offer my very sincere thanks to Stacy and Kat, and to Broadsided Press. 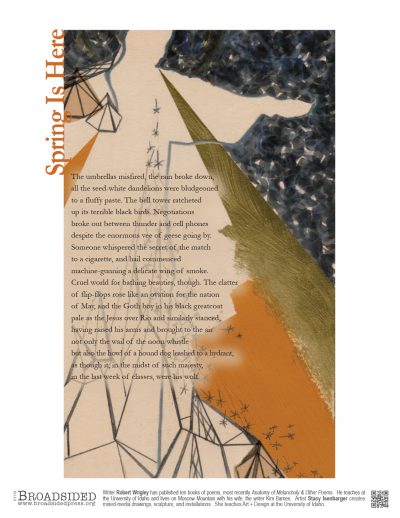 NOTE: This month’s collaborations ALSO went live on the busses of Moscow, Idaho—along with others from our archives.

Poet Robert Wrigley has published ten books of poems, most recently The Church of Omnivorous Light: Selected Poems and Anatomy of Melancholy & Other Poems. He teaches at the University of Idaho and lives on Moscow Mountain with his wife, the writer Kim Barnes.