What is behind your choice of this piece of art in response to the Actions at Standing Rock?
Artist Theodore C. Van Alst, Jr.: I took this picture of the sun setting as we were heading north away from the camp, and I knew we too would all return. The white weight is as inevitable as the brown resistance, the sun’s setting as inevitable as its rising.

What led you to this poem about the Actions at Standing Rock?
Poet CMarie Fuhrman: I live at about 6,000 feet in central Idaho. It has been snowing here since October, and the snow does not melt; as I write, we have over three feet. This year, many deer will die, saplings will be unable to bear the weight. From my window, the world has become monochromatic.

Following the news about my brothers and sisters at Standing Rock, I could not help but begin to feel the weight of all this white. The snow on the shoulders of young trees, became the snow on the shoulders of young people at the camps at Standing Rock, but also a metaphor for something greater that has been accumulating on the shoulders of all Indigenous people. What happens to the Indigenous people of any region is telling of what will happen to the region as a whole, the earth as a whole. How much more weight can be held before the small trees bend or break? How much more burden of the dominant culture can indigenous people hold before they shake it and rise up, or are broken completely? This poem seemed to be exploring those questions with me.

What do you think is the role of art in regards to real-world, real-time events? In other words, what makes a “successful” occasional or political piece of writing or art?
Poet CMarie Fuhrman: For me, the success of any of my writing is deeply seated in honesty. Not only honesty in disseminating information/facts, but being honest in my feelings about the whole of the event/world. When we talk about history, we look to the facts, but we also look to the poets and the writers and the literature produced in that time. These tell us about the heart, they tell us how people, at least one person, felt about what was happening. A piece that is written from the honest holdings of the heart will always be successful. If it can escape agenda, the need for accolades, the desire to work for money, then it can be heard by other hearts and trusted as truth, as information surely as reliable in relating the human condition as any newspaper article or science-based fact. 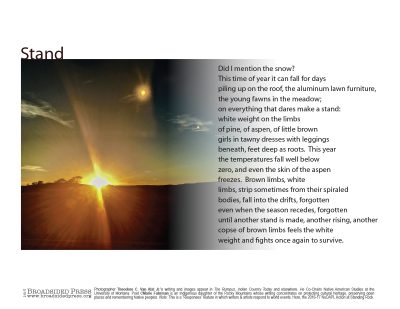 Poet CMarie Fuhrman is an Indigenous daughter of the Rocky Mountains. Passionate about the wild and sacred, CMarie concentrates her writing and poetry on protecting cultural heritage, preserving open places and remembering Native peoples. She has won the Burns Award for Poetry from the University of Idaho, published in Metaphor, Juxtaprose, Cutthroat, and Taos Journal of Poetry. CMarie is currently enrolled in the MFA Program at the University of Idaho.