What did you think an artist would pick up on from your poem?
Poet Maria Hummel: To me, the most obvious images would be a train or train tracks.

What inspires you in this poem?
Artist Elizabeth Terhune: I find I carry this poem with me as one would a stone in the pocket. I am deeply grateful to Maria Hummel for articulating the world and space of this poem.

Did the visual artist refract any element of the poem that made you see the poem differently?
Poet Maria Hummel: The larger and smaller hat evoked the protectiveness in the mother’s voice. I really like that. I also like that they’re wintry hats because I live in California, so my mental image of “hat” is for sun protection, not warmth. Terhune’s choice made me feel like the poem could be more universal, less rooted in a specific place. Plus, any illustration that includes pom-poms (two!) is a visual treat.

When you began this piece, was it color, shape, or some other aspect that you followed? Did that change?
Artist Elizabeth Terhune: Immediately, I saw a knit hat, hand-knit, well loved, some pilling—gray and red wool. My initial idea was to do a very detailed pencil drawing of such a hat and echo the intensity of the poem through the attention to detail—cables, seed stitches. I wanted cadmium red in there, too. But that isn’t really how I work. One night, I made a thinking drawing in my sketch book. I don’t remember exactly what happened. With ink. I often use sticks, feathers, etc. to sketch for greater engagement with touch, mark, accident, and chance. I wasn’t focused on page/scale, and the chin ties of the hat I was drawing reached across the middle of the sketch book. Ink pooled in the binding seam and some splattered on the facing page and I hurried, working to make the splatter into a hat. I was just so focused on hats. At that point, pulling back, I saw the smaller hat was floating away from the reach of the larger one, drifting like a capsule in space. My studio area is littered with subsequent drafts.

What surprised you about this collaborative piece?
Poet Maria Hummel: The pronounced absence of human figures. Maybe both mother and child have lost their hats, or maybe they’ve become their hats. That’s the thing about a terrific image: it can create a reality and transcend it at the same time.
Artist Elizabeth Terhune: I was very pleased that the poem physically fit with the image. It is always tricky to work with that in mind. You need to leave room.

Have you ever written work that has been inspired by visual art? What was that experience like for you? Why were you inspired to do so?
Poet Maria Hummel: I once wrote about a photograph I saw at SFMoMA: it showed a house broken in two by the 1906 San Francisco earthquake. The house is still standing in the picture, but the fracture runs from ceiling to foundation. I used it as a metaphor for a family impacted by the news of a baby born with genetic defects.

Looking back, I’m not sure I got it right. I think now that the comparison oversimplified things, that wood and nails are much less forgiving than the human spirit.

If the Broadsided collaboration were a piece of music, what would it be?
Poet Maria Hummel: Smetana, Ma Vlast.
Artist Elizabeth Terhune: Tchaikovsky’s piano piece: The Seasons, Op. 37b, October, and perhaps also March. I have Ashkenazy recording but these links to Lev Oborin will give the idea:

Read any good books lately?
Poet Maria Hummel: Mary Coin, by Marisa Silver, is like a broadsided on a big scale. It’s a novel that posits a fictional vision of Dorothea Lange’s famous “Migrant Mother,” revealing how photographer and subject intersected in California and how that moment shaped their lives.
Artist Elizabeth Terhune: Poe’s Tales of Mystery and Terror. Currently, concurrently: Thoreau’s Journals, a book entitled The Archaeological Imagination by Michael Shanks, and American Eden by Wade Graham.

Anything else?
Artist Elizabeth Terhune: I’m in an upcoming group show in upper Manhattan in a crypt. See “North Grid Artists’ Projects” or visit my web site elizabethterhune.com (the “News” tab) for details. Please join us for the opening Nov. 2 if you are in NYC.
Poet Maria Hummel: Yes…
Q: How is a train not like a teacher?
A: A teacher says “Spit out your gum!” while a train just says choo-choo. 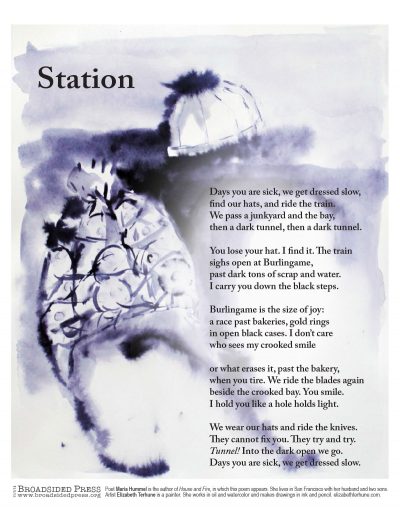 Poet Maria Hummel is the author of the poetry collection House and Fire, winner of the 2013 APR/Honickman First Book Prize, and two novels: Motherland (Counterpoint, 2014) and Wilderness Run  (St. Martin’s, 2003). Her poetry, fiction, and nonfiction have appeared in Poetry, New England Review, Narrative, The Sun, The New York Times, and The Open Door: 100 Poems, 100 Years of Poetry Magazine. She lives in San Francisco with her husband and two sons.

Artist Elizabeth Terhune has exhibited widely throughout the United States. You can view some of her work online at www.elizabethterhune.com, and selected works in the Pierogi Gallery Flat Files, Brooklyn, NY, as well as through the Drawing Center’s Online Viewing Program Artist Registry. She teaches painting and drawing at the 92nd Street Y and at NYU’s School of Continuing and Professional Studies in New York City.