Note: This broadside is part of our annual translation special feature.  Our Translations Editor, CMarie Fuhrman,  selected two poems—both by poets writing in a language indigenous to the Americas. We are grateful for her time and vision. Of her choices and these broadsides, she has this to say:

This last year was one of foiling distance. Holding each other at arm’s length while still doing our best to embrace. In my lifetime, language—the ability to communicate—was never more important. The last two years have made me even more curious about Indigenous languages, how the landscape formed those languages, and how the language then changed or created the speaker. I wanted to fill the distance between poets and artists and people like myself with words that created bridges of understanding. In something we all shared. There were wonderful and acute differences to be celebrated and so many opportunities to learn about the individual selves.  With the help of my friend, poet, and translator, Don Cellini, I was introduced to the work of Hubert Matiúwàa. “Adà/Boy” held such quiet vulnerability and a masking of a different kind that I found important to acknowledge. I also loved holding the words, the Mè’phàà language, in my view as I read Paul’s translation. Here is a land of language I know nothing about, a wilderness of sorts, and even as I cannot know those words, I can know that what is in them connects us. They are doors that, when carefully opened, show us something of ourselves.
.
The same then is true for “He Lei Māmane no Maunakea” by ku’ualoha ho’omanawanui. In this poem, I am reminded of the language that no human speaks. A language that fascinates and draws us into place even as we can never translate it, the language of birdsong. Of flowers, even. Looking at the poem written in Native Hawaiian, I can read, though I may not understand, the song there. I invite you to whisper it to yourself. Note the “O” your lips form and the kind of song that it is, the way holding the long “e” feels. Poetry joins us always in song. Even as we cannot understand a language, our bodies know the song, the feeling those sounds create within us.
.
We are so fortunate in this time of distance that sound, even in languages we cannot decipher, from that of birds to that of poets living on distant shores, still unites us. Embrace the multitude of music created, embrace that beauty. In this way, even without arms, we embrace one another.

What surprised you about this collaborative piece? / ¿Qué te sorprendió sobre esta pieza colaborativa?
Translator Paul M. Worley: Collaboration is always full of risk and uncertainty, particularly when it comes to the eventual outcome of the collaboration. I think David’s artwork really captures the poem’s combination of terror and innocence, its beauty and ugliness, its love and deep melancholy.
Poet Hubert Matiúwàa: Los colores y la textura, como una piel de hojas, lo frágil y la fuerza que representan los niños.
Artist David Bernardy: I am not sure if this counts as a surprise exactly, but I will say this: when I read the poem the third or fourth time, once I knew I wanted to respond visually to it, I was struck by all the rich, concrete images. Those buzzards, the dusty, abandoned marbles, clothes on a line, the grotesque-seeming rosaries.  All of these filled my mind with such possibility, I could see them all reflected somehow in the image. But, as I began working on it, ultimately, all I really wanted was the boy, and not even all of the boy, but just the collarbone, the lips and chin, the bony chest. I think of these as some of the young male body’s most vulnerable points, and above all, that’s what I wanted to convey. Vulnerability.

Do you see an overlap between the act of translation and the act of responding visually to a piece of literature?
Translator Paul M. Worley: Definitely! I’ve done a lot of work on Maya understandings of text with my co-conspirator Rita M. Palacios, and think that those of us who are literate in Latin script do not appreciate the visual and its possibilities nearly enough, whether we are talking about comic books or Maya stone monuments from 1200 years ago. In many communities, knowledge passes back and forth between written and visual media all the time. That is one of the aspects of this broadside that I find so thrilling!
Artist David Bernardy: Definitely. I think the choices an artist makes are very similar to the choices a translator makes. How does one translate a metaphor? Do you do it literally, word for word? Does that literal translation maintain the meaning of the original? Similarly, when I think of making visuals, do I pick a literal image from the poem? I did, the boy. But beyond that choice are more subtle decisions: what is the right pose for the boy? Should the boy be a photograph or a drawing? Should the line quality of that drawing be expressive or realistic? And what about the background, color, texture, etc.? All these are trying to translate some aspect of the poem, or at least, of my experience reading the poem.

Why this poem?
Artist David Bernardy: Like a lot of boys, I grew up playing with toy guns, running through the woods, playing soldier. All those fake deaths. When I first read of boy soldiers years later, I thought back to those days and was terrified for those boys. I cannot fully imagine what their life is like. So I brought that sense of horror to the first reading of the poem, but then I was struck by those gorgeous images I mentioned above, and how the poem creates something haunting and beautiful.

How does translation fit into your creative life?
Translator Paul M. Worley: In a lot of ways, translation allows me to live in multiple aspects of my linguistic being at once, meaning I don’t have to choose between languages but can continually work across them. It allows me to explore and play around with creative possibilities that otherwise I would miss out on when I am reduced to one language.
Artist David Bernardy:  In the sense of “translation” meaning illustration, or visually responding to the written word, I do that a lot, so I often think of it as the starting point of my creative work. As for reading or watching works in translation, I do this a lot less frequently, which is surely a shame.

Read any good books lately? / ¿Has leído algún/os libro/s bueno recientemente?
Translator Paul M. Worley: I’ve been catching up on a lot of things lately, and three amazing books immediately come to mind: Kelli Jo Ford’s Crooked Hallelujah, David Heska Wanbli Weiden’s Winter Counts, and Annette Saunooke Clapsaddle’s Even as We Breathe.
Poet Hubert Matiúwàa: Si, platicar con Feliciano, un anciano de 105 años, una biblioteca oral andante de la memoria de mi cultura.
Artist David Bernardy: I am really enjoying A Swim in a Pond in the Rain by George Saunders, in which he discusses six pieces of short Russian literature (in translation!) and what we can learn from them. His “voice” as a teacher is funny, thoughtful, humble, and compassionate. 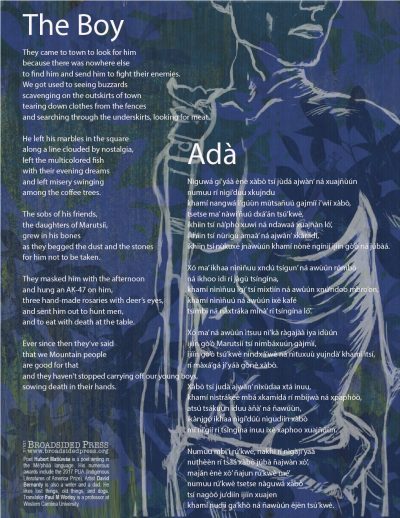 Poet Hubert Matiúwàa (b. 1986 in Guerrero, Mexico) is a poet writing in the Mè’phàà language. He has received numerous awards, including the 2017 PLIA (Indigenous Literatures of America Prize). He is the author of Xtámbaa/Piel de Tierra (2016), Tsína rí nàyaxà’/Cicatriz que te mira (2017), and Mañuwìín/Cordel torcido (2018).

Translator Paul M. Worley is a professor at Western Carolina University, which is built on the site of the Cherokee town Tali Tsisgwayahi, or “Two Sparrows Town.”

David Bernardy is an artist, a writer, and a dad. He likes lost things, old things, and dogs. www.davidbernardy.com David & “Boy” in the library, where all good things live.

Editorial Note on the Annual Translation Feature: Broadsided has Vectors everywhere, and poetry and art speak across cultures, bridging and enlarging them. The very nature of an artist responding to a visual work is an act of translation. To deepen this awareness and conversation, we began offering regular translation features at Broadsided in 2012.

In 2014 we refined that vision to showcase poets of the American Continents writing in their Indigenous/First Languages.  Interviews and photos of the broadsides shared in public spaces within the poets’ and artists’ communities show how poetry and art, as part of our daily lives, can create awareness and understanding, deepen connection to other cultures, and broaden our literary communities.

Translations Editor CMarie Fuhrman is the author of Camped Beneath the Dam: Poems (Floodgate 2020) and co-editor of Native Voices (Tupelo 2019). CMarie is a regular columnist for the Inlander and Director of the Elk River Writers Conference.  She resides in the mountains of West Central Idaho.