In what sense did the poem first present itself as a collaboration with a visual medium? Did it come to you first as image? As an idea? Music? Narrative?
Artist Lisa Sette: A narrative. Because of the pace of it, the rhythm. It’s like a song to me, actually, more than anything else.

If the broadside collaboration were a land formation, what would it be?
Poet Robert Strong: Color. The color in this photograph is right on the surface and dusty on the side of the road. It made me realize how much color is in this poem and that I don’t write on image (color), but on America. Which is filled with the kind of bright buy-me colors we see here in this photo. I don’t think about the colors that happen to appear in my poems—but they do appear.

If the poem were a weather pattern, what would it be?
Poet Robert Strong: First the dust comes up, then the rain washes it off and out to the side—small twister in the radio AM distance.
Artist Lisa Sette: I feel like it’s meditating on the idea of the collision of consumption and humanity… and we’re losing. It’s a really bright sunny day. No clouds. It hurts.

If the broadside collaboration were a land formation, what would it be?
Poet Robert Strong: A small hummock where I left some old Triple-A guides someone came along and collaged upon. Then I came back later.
Artist Lisa Sette: A desert. I don’t know. It feels like we’re lost.

What did you think an artist would pick up on from your poem?
Poet Robert Strong: Violence. (Which I do see the remnants of in the dismembered kid’s truck in the lower left. And the truncated kids’ trunks!) But what I really see is youth, color, and concession.

Let’s say that your broadside collaboration was a first date. How did it go? First base? Second? Nightcap? Would you make plans for a second date?
Poet Robert Strong: This was like a blind date, on a night I’m feeling moody, set-up by someone all the way in friggin’ Alaska. What do they know about dating in Alaska! Thought: no way. Got home thinking: well wow the world does have people in it to spark me. You can play with my pen if I can play with your camera.

Can you talk about the interaction of your image and the poem?
Artist Lisa Sette: Well, I feel like they are very different. When I think of Rob’s poem, it’s very visual—maybe that’s because I’m a visual person, but I have all these images of the golden arches, oak trees, the pious Prius, gas mileage. But we forget the bigger picture. That we’re such a consumptive culture. We forget the bigger price in all that ease. The image I took was originally very comical to me. Two mannequins with no upper bodies amidst these t-shirts. Thousands of t-shirts but nothing to put them on. It’s something about our culture, though. There’s more there… it’s about excess. The little tractor and the empty space of the hallway is very sad to me. There’s no one in that image. The image was taken in Mexico, in a town that had so few people. That bodega was so desperate for someone to go in there and take something. It’s a sad state of affairs, and that’s all related for me. We keep producing and taking and there’s a lot of losses, included that of the spirit.

Read any good books lately?
Poet Robert Strong: Summer novels: half way through Falling Man, Don DeLillo—yikes. He’s like Beck: so genius seamless you might think it’s getting predictable. Also Then We Came to the End. Hilarious first novel by Joshua Ferris. My blurb: “If you like watching The Office on TV, you’ll love reading this novel not on TV.” Poetry yesterday: the playful hilarious logo-turns of Deborah Bernhardt’s Echolalia from Four Way Books.
Artist Lisa Sette: Cormac McCarthy’s The Road, interestingly enough. Pretty amazing book. For all the young people in the world who didn’t have to read Hiroshima and have forgotten about nuclear holocaust… they have to read it.

Seen any good art exhibits lately?
Poet Robert Strong: I was in Pittsburgh and wandered into the ‘Hall of Architecture’ at the the Carnegie Museum of Art. Fuggedaboutit. Whole sides of buildings done from plaster castings. Ancient domes and columns. Venus du Milo. Um, tons of stuff, unbelievable. Simulacra, authenticity, a gentle sort of plunder, tiny imperfections twice removed, and just some giant cool stuff from people seeking meaning and beauty a few thousand years ago—via the now gone phenomenon of “cast collecting.” Then you get upstairs to the contemporary art and see Rachel Whiteread’s dinky polystyrene cast of a mere bath and feel weird.
Artist Lisa Sette: I haven’t been to an art exhibit in a gazillion years. But this month I drove out of Alaska on the AlCan highway. That’s a pretty phenomenal installation. I mean it. It allows you to move through an area that is wild. You fly through wildness.

Anything else?
Poet Robert Strong: The Situationists seem to be aging well.
Artist Lisa Sette: The poem is talking about a very specific thing: highways. Driving. The temptation is to use an image of a road, but that’s too literal. I feel like we’re willing to forsake so much of ourselves and our planet for pleasure and ease. For more. But more of what? More bullshit. 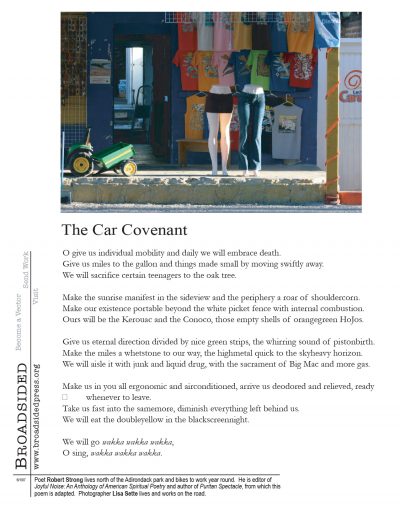 Poet Robert Strong lives north of the Adirondack park and bikes to work year round. He is the editor of Joyful Noise: An Anthology of American Spiritual Poetry and author of Puritan Spectacle, from which “The Car Covenant” is adapted.

Artist Lisa Sette holds a BFA in photography and a master’s degree in biology.