What made you think of Broadsided for this poem?
Poet Adele Elise Williams: Several things! First, the poem is performative, it’s meant to be interacted with and expanded beyond the page, and an artistic visual response to it seemed like one way to do that. I haven’t done anything like this before with my work, but I’ve always wanted to, and I imagined this poem could only deepen as a result (and it totally did; thank you JoAnne!). Second, as the world we live in becomes more and more difficult to navigate and at times to endure at all, addiction has only gotten worse. From social media to alcohol to hard drugs, someone is, or knows someone who is, battling addiction. It must be treated as the disease it is and as not a choice or a defect or an impossibility.

What inspires you in this poem? What drew you to it?
Artist JoAnne McFarland: I love the way the poem reels! I knew right away it was about a journey between life and death. The mother is the North Star, the one pinpoint of light remaining in this child’s life—a daughter who cannot bear the future, either literally or emotionally. I think most of us have a few moments on this edge, when all we can do is let go and pray. Adele’s poem is brave in the way it acknowledges these perilous moments when, yes, the road between here and there is paved, but we’re not quite sure with what. We’re at the mercy of forces we cannot control, or even fully understand. Most of all, I love the way the poem speaks to how we hide how much trouble we’re in, from ourselves and others, through humor, or silence, as if that will make it all just go away.

Describe your dream “Vectorization”—where, in your wildest dreams, would you most like to see this broadside posted in the world?
Artist JoAnne McFarland: I would post the broadside at eye level, but on the actual sidewalk too, so that it would take people by surprise, and they might lean in to experience the work as part of a path.
Poet Adele Elise Williams: Trailing behind one of those advertising planes you see at the beach! Oh! Or on a blimp! Ha! In all seriousness, I think it would be truly powerful to disrupt the American vacation facade (which I indulge and enjoy, of course!) for just a moment with a reality check. So yes, my vote is aerial advertising.

What did you think an artist would pick up on from your poem? Did the visual artist refract any element of the poem that made you see the poem differently?
Poet Adele Elise Williams: You know, I really had no idea what to expect, but I was a little worried about someone not understanding the poem or flattening it. This is not what happened at all. Not even close. I am so very struck by JoAnne’s graphic print behind the poem. It speaks to its domestic sphere. This poem is about family and home and safe spaces (or the lack thereof within specific contexts), and the quilt-esque print communicates that in a way that I could not have possibly imagined. Additionally, as a woman who will always be a child for her mother, that momma-star makes my heart sing.

Did anything shift for you or come into new light as you began working on your visual response?
Artist JoAnne McFarland: The intensity of the poem increases each time I read it. From the beginning, I wanted to emphasize the stars. It took a while to develop the right mood for the subject matter. Finally, I landed on a backdrop that was dark, but not threatening.

Have you ever written work that has been inspired by visual art? What was that experience like for you? Why were you inspired to do so?
Poet Adele Elise Williams: I have! But only a very few times, and all times were from photographs. As someone who writes primarily about themselves (typical poet!), it was challenging to enter an outside narrative, but important. It is ok to objectify myself, to re-write and/or re-cast myself, but when it comes to entering someone else’s world (and I’m thinking here of a photograph I wrote about by David E. Scherman of Lee Miller in Hitler’s bathtub), one must respect the distance they have from that subject. I am still learning how to do this, or if I even should.

If this Broadsided collaboration were a specific historic moment, what would it be?
Artist JoAnne McFarland: The death of Billie Holiday in 1959, aged 44, from drug and alcohol addiction.
Poet Adele Elise Williams: I think of the devastating opiate and meth addictions in Appalachia where I lived for much of my adult life. JoAnne’s art reminds me of traditional Appalachian quilting techniques as well as the importance of storytelling.

Do you have a favorite, generative prompt to inspire bold, amazing work?
Artist JoAnne McFarland: My best ideas come to me when I’m just waking up, when I’m no longer dreaming (so I can remember things) but my mind is super flexible, and  anything seems possible.
Poet Adele Elise Williams: Here’s one I often use in writing workshops: Tell your “life story” in three different narratives (or with lyric) that all center around hair.

Read any good books lately?
Artist JoAnne McFarland: The novel Blindness by José Saramago; Ricochet Script, the new poetry collection by my friend Alexandra van de Kamp; and my daughter Lissie’s debut novel, Catherine House, which I re-read every few months because I find it so enchanting.
Poet Adele Elise Williams: I’m working on a book that reimagines biblical narratives in contemporary contexts, and in support of that project I’ve just started reading Aldous Huxley’s The Devils of Loudun. From the back cover: “In 1634 Urbain Grandier, the handsome and dissolute priest of the parish of Loudun was tried, tortured and burnt at the stake. He had been found guilty of conspiring with the devil to seduce an entire covenant of nuns in what was the most sensational case of mass possession and sexual hysteria in history.” YOOOOO!!! Right?! 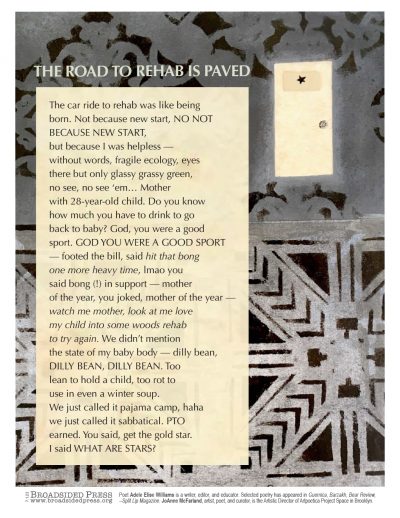 Poet Adele Elise Williams is a writer, editor and educator pursuing her PhD in Literature and Creative Writing at The University of Houston where she serves as Nonfiction Editor for Gulf Coast. Adele is the winner of the 2019 Emily Morrison Poetry Prize and 2022 Inprint Donald Barthelme Prize for Poetry as well as the recipient of fellowships from UCROSS, Inprint, and Hindman Settlement School. Selected work can be found or is forthcoming in Air/Light, The Florida Review, Guernica, Cream City Review, Split Lip Magazine, The Adroit Journal, Quarterly West, Beloit Poetry Journal, and elsewhere. Her current goings-on can be found at adeleelisewilliams.com.

JoAnne McFarland is an artist, poet, and curator, and is the Artistic Director of  Artpoetica Project Space in Brooklyn which exhibits works that focus on the intersection  of language and visual representation. McFarland has artwork in the permanent  collections of The Library of Congress, The Columbus Museum of Art, and The  Department of State, among many others. Recent shows include: Best & Brightest and  The Indivisible Spectrum, both at The Painting Center in NYC. Her latest multimedia  collection, Pullman, will be published by Grid Books in 2023. McFarland’s traveling  curatorial project SALLY explores the histories of women whose lives have been  marginalized, or forgotten. SALLY will be at The Brickbottom Gallery in Somerville, MA  this September. www.joannemcfarland.com