Note: This broadside is part of our annual translation special feature.  This year’s guest editor is Joan Naviyuk Kane. We asked her to select two poems—one from a forthcoming publication from Tavern Books, one by a poet writing in a language indigenous to the Americas. We are grateful for her time and vision. Of her choices, she had this to say:

It’s an honor to bring Michael Wasson’s poem and his translation work to your attention. The honor outweighs the anxiety of observing the steamrolling smoothness with which the German of Borchers’ poem is redeployed into English. There are thousands upon thousands of translators between these languages. How many translators of Niimíipu are there? Does it matter to you, reader, that the language survives, unflinchingly embedded in Wasson’s consciousness and page? What are the implications of requiring legibility from languages that survive millennia through their exclusive orality rather than through the economies complicit in their written inscription? Connection through language is not a crass manipulation of power structures. Lyric can be a way to become more elusive, not less so. Its resonant genus may pull attention away from the power of the dominant cultures that seek to discursively define its subjects. I could quote Emily Apter or Barbara Johnson. And I settle on the latter. “In translation, the body is never in exactly the same place.” And again, “only through translation does the work’s foreignness to its own language become apparent.”
—Joan Naviyuk Kane

What surprised you about this collaborative piece?
Translator Caroline Wilcox Reul: I hadn’t envisioned how one would write silence but thought Janice captured it perfectly—the way the text was burned through, or perhaps the ink had dissolved itself and the paper that held it, as if words were only empty spaces surrounded by the charred remains of meaning. Beautiful!
Artist Janice Redman: When I began, I had no idea what form my response would take. I imagined blackening the page with charcoal, thickening the image as I went until something appeared… but what surprised me was a strong urge to erase the words somehow—maybe to find the silence within them. I had an old book called My System for Ladies by J.P. Muller. It had photos of women doing exercises. I used a wood burning tool to cut out the figures on each page and then I would turn it over; slowly and methodically I burned out the letters of each word. What I really liked and was surprised by was how the erased words looked like they could have been from any language.

Do you see an overlap between the act of translation and the act of responding visually to a piece of literature?
Translator Caroline Wilcox Reul: Absolutely! Both involve interpretation as a kind of echo, an attempt to serve the original but also create something new at the same time. And the echoes multiply as Elisabeth Borchers wrote the original as a response to someone else’s poem which was inspired by something else that we can’t really trace anymore.

How does translation fit into your creative life?
Translator Caroline Wilcox Reul: I’m not a blank-canvas type of person. I’m able to be most creative when I have a framework that I can fill out and then work from. As a translator, I start with a text but then am free to guide the interaction between languages—this happily involves the entire linguistic spectrum from phonology through pragmatics—in a spirit of play.

Why this poem?
Artist Janice Redman: I guess, when I read the poem, I really resonated with it, the feelings of failing being part of the process, of making and creating… struggling along in my studio, my mind telling me that I don’t know what I am doing but still having to trust the process of making just by showing up over and over again. This poem I found somehow reassuring and affirming—that there comes a moment of transformation when the work magically becomes itself, separate from the process and even the artist. It turns into its own being, its own life, one that is new and mysterious to me. I am left with hope.

Read any good books lately?
Translator Caroline Wilcox Reul: I just finished Remainder by Tom McCarthy. In it, the main character feels like everything he does is an imitation, somehow derivative and not natural, and tries to get back to the original or genuine. Thinking about this book and these questions, the main character in the novel struggles in the opposite way of the translator and visual artist. The last German book I read was Agnes by Peter Stamm, a book about another maladjusted first-person narrator!
Artist Janice Redman: Yes, a young adult book called It Ain’t So Awful, Falafel by Firoozeh Dumas.

Seen any great art lately?
Translator Caroline Wilcox Reul: Sadly, I’m long overdue.
Artist Janice Redman: I need to get out and see some… too much time on the farm!!! 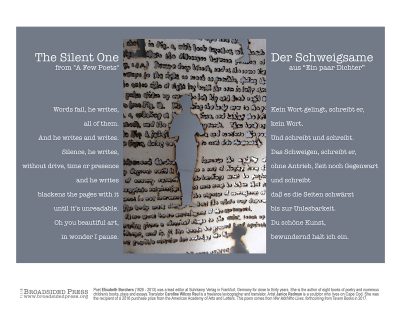 Guest Editor Joan Naviyuk Kane is a Whiting Award winner and author of The Cormorant Hunter’s Wife, Hyperboreal, The Straits, and Milk Black Carbon. Her poem “Mammaraq (Innuŋŋuuraq)” / “The Doll (A Pretend Person)” was featured in our 2014 Translation Feature.

Poet Elisabeth Borchers (1926 – 2013) is often cited as playing a critical role in the development of German literature during the second half of the 20th century. She is the author of eight books of poetry, numerous children’s books, radio plays and essays and has translated many books from French into German.

Translator Caroline Wilcox Reul has a MA in computational linguistics and German language and literature from the Ludwig-Maximilians-Universität in Munich. This poem will appear in her translation of Borchers’ Wer lebt/Who Lives, forthcoming from Tavern Books in 2017.

Artist Janice Redman is a sculptor who lives on Cape Cod. Her work is in the permanent collections of the deCordova Sculpture Park and Museum and the Eli and Edythe Broad Art Museum. In 2016, she received a Purchase Prize from The American Academy of Arts and Letters.